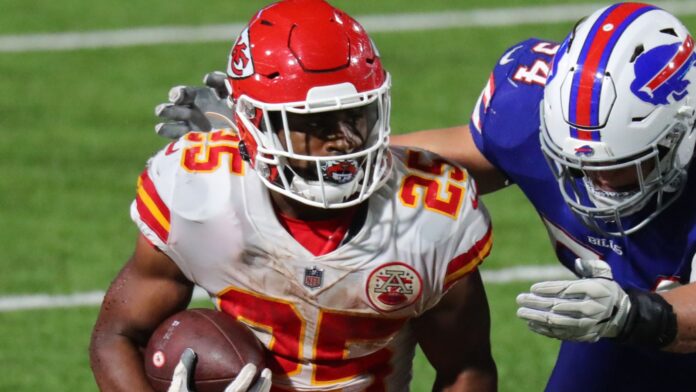 Week Seven in the NFL gets underway with Thursday Night Football – New York Giants @ Philadelphia Eagles – from 1.20am, Friday

Kansas City Chiefs rookie running back Clyde Edwards-Helaire rushed for 161 yards on 26 carries as they toppled the Buffalo Bills 26-17 in heavy rain on Monday night.

Edwards-Helaire’s 100-yard game comes after the Chiefs (5-1) signed Le’Veon Bell last week following his release from the New York Jets. Bell, a two-time All-Pro running back, did not play while following Covid-19 protocol after joining the team.

The contest was played in steady rain in Buffalo, prompting Kansas City quarterback Patrick Mahomes to pick his spots in the passing game. He finished 21 of 26 for 225 yards with two touchdowns, both to tight end Travis Kelce.

Tyler Bass connected on a 48-yard field goal to give Buffalo an early 3-0 lead and, after Mahomes and Kelce’s first scoring connection, Josh Allen found Diggs for a four-yard TD to see the Bills regain the lead.

Trailing 10-7, the Chiefs then scored 16 unanswered points before Allen finally triggered the Buffalo passing game. Allen went 5-for-5 on a drive he capped by hitting Cole Beasley for an eight-yard score to slice the gap to 23-17 with just over six minutes left in the fourth quarter.

Kansas City, however, used up over four minutes of the clock with their dominant run game to set up a Harrison Butker, game-clinching 30-yard field goal. The Chiefs logged 30 second-half rushes and 46 carries overall, the most ever for a team coached by Andy Reid.

Bills QB Allen, who came in averaging 317.8 yards passing, finished 14 of 27 for 122 yards and two touchdowns, but he had his last attempt of the game intercepted by Daniel Sorensen. The Bills (4-2) had only 84 yards rushing while slipping to a second-straight defeat of the season.