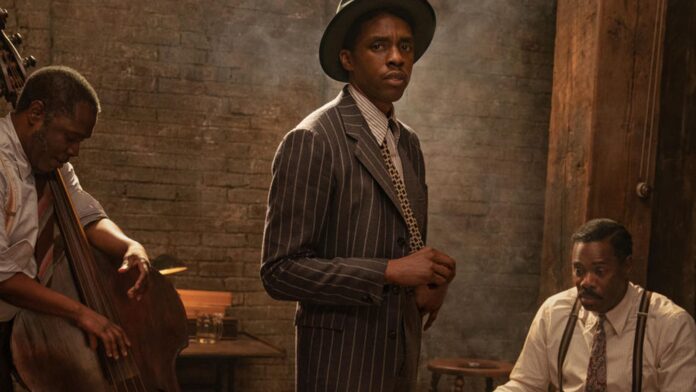 Chadwick Boseman can be seen starring as an ambitious trumpeter in the trailer for Ma Rainey’s Black Bottom, the last film the star made before his death.

The Black Panther star had worked on the project, filming alongside Oscar-winner Viola Davis, while receiving treatment for colon cancer.

Boseman died in August, four years after his diagnosis, aged 43.

Netflix has now shared the trailer for the film, which is set in 1920s Chicago and explores issues of race, music and the exploitation of black artists in the industry.

It tells the story of “Mother of the Blues” Ma Rainey, played by Davis, who is fighting with her white manager and producer for control of her music.

Ambitious session band trumpeter Levee, played by Boseman, is out to make a name for himself. In the trailer, he is offered a deal with a white music industry figure, who says of his songs: “I’ll take them off your hands for you.”

Should Boseman be nominated for an Oscar for both roles, he would be the first actor to receive two posthumous nods.

The star played black icons Jackie Robinson and James Brown early in his career, before finding fame as the regal Black Panther in the Marvel cinematic universe. Released in 2018, it was the first superhero film to get an Oscar nomination for best picture.

After keeping his cancer diagnosis private, Boseman’s death shocked the entertainment world and fans, with most people not aware he had been ill.

Davis was among those paying tribute, saying there were “no words” to “express my devastation of losing you”.

She continued: “Your talent, your spirit, your heart, your authenticity… It was an honour working beside you, getting to know you.

“Rest well prince… May flights of angels sing thee to thy heavenly rest. I love you!”

Ma Rainey’s Black Bottom is based on a play of the same name by the award-winning August Wilson, and was produced by Denzel Washington.

It is set to launch on Netflix on 18 December.