Home Top News Food and nutrition security in times of drought is key to achieving... 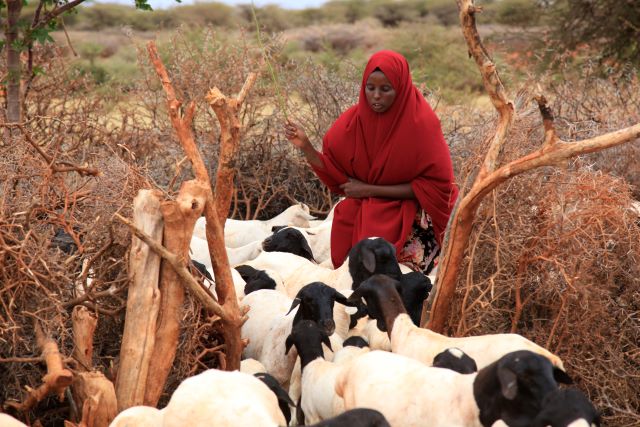 Over the past five decades, the Horn of Africa has seen a continuous stream of both natural and man-made shocks. Combined with poor governance of land and other natural resources, as well as long-term economic and demographic trends, these shocks alongside conflict have challenged even the most resilient dryland livelihood systems.

Somaliland’s population faces recurring food insecurity, with Sanaag and Sool regions often the worst affected. This persistency demonstrates the generally low resilience of the people and food systems in the region. Furthermore, the needs of rural communities have largely been met through humanitarian assistance and short-term funding mechanisms.

In a recent survey conducted in Somaliland to determine the relationship between conflict and food insecurity, the majority of participants, both men and women, mentioned drought as a frequent shock that leads to violence. The survey was conducted under the Food and Nutrition Security Resilience Programme (FNS-REPRO), funded by the Netherlands and implemented by FAO. FNS REPRO addresses some of the root causes of the protracted crisis in the easternmost region of Africa. The programme focuses primarily on improving the fodder value chain in Sanag and Sool regions in order to build food systems that are more resilient to weather shocks, which can improve food security and nutrition while delivering localized peace dividends.

Drought as a leading shock

An estimated 662 000 people across Somaliland are expected to face severe hunger between October and December 2020. An additional 942 000 people are expected to be food insecure, bringing the total number of people facing acute food insecurity to 1.6 million, according to the Post-Gu 2020 Technical Release issued by FAO’s Food Security and Nutrition Analysis Unit (FSNAU) and the Famine Early Warning Systems Network (FEWS NET) on 30 September.

Within this food insecure context, which is dominated by the scarcity of pasture in grazing fields and food for human consumption, drought often leads pastoralist communities to engage in violent conflict to access these scarce resources. Pastoralists are forced to travel to new areas in search of pasture and water for their animals. The arrival of livestock in a new area implies close competition for already scarce grazing and water resources between the new arrivals and local pastoralists, eventually leading to conflict and ultimately damage to property and deaths.

In the aforementioned FNS-REPRO survey, the majority of informants stated that the most common cause of conflicts is the arrival of livestock in a new area during drought periods, resulting in 32 percent of the conflicts reported.

In a region that earns an estimated USD 200 million a year from the export of livestock, mainly to Saudi Arabia, an unmitigated drought means a major blow to livestock exports, which can lead to food insecurity and malnutrition and the destabilization of the region. Somaliland’s economic growth depends on livestock production and trade, the backbone of its economy, which accounts for 60 percent of its GDP and employs 70 percent of the population.

Many factors have led to the scarcity of fodder for animals in the region. Drought, overgrazing, rapid degradation of forest cover due to charcoal production and animal mobility due to the breakdown of customary and state institutions are among the most relevant causes. Moreover, according to the Ministry of Planning and National Development of Somaliland, vague tenure or resource ownership, and illegal land encroachment of former grazing areas contribute to the problem substantially.

These are compelling reasons why pastoralist communities in Somaliland need good grazing practices and a strong fodder value chain to minimize the effects of drought. The fodder value chain is a priority that cuts across humanitarian and development interventions, with numerous missing links in between (particularly its access, availability and use by poor pastoralists).

Fodder represents both a major need and opportunity, considering its scarcity, demand and market potential, as well as it being a recurrent need in humanitarian response that is difficult, costly and inefficient to import, as experienced during the 2016/17 drought period.

The fodder value chain needs to be strengthened in Sanaag and Sool through consultations with the government, local authorities and communities as a response to the negative impacts of shocks and increased vulnerability of their communities. However, the initiative can be achieved through a disaster risk, conflict resolution, and peace-building lens.

A major area to invest in to strengthen the fodder value chain is the improved management of the rangeland grazing areas for sustainable commercialization of fodder, particularly in Sanaag region that hosts extensive natural rangeland grazing areas within some of the production valleys. The value chain should also support fodder storage and processing infrastructure, as well as capacity development (particularly training) on good grazing management practices.  Besides improved animal productivity, a strengthened fodder value chain will create new decent jobs, increase incomes, while easing conflicts between pastoral communities and increasing overall resilience to natural disasters.

Strengthening food security is key to avoiding drought-related conflicts, according to the main findings of the FNS-REPRO survey. Investing in drought mitigation and systematic planning are key to improving food security and nutrition in the Horn of Africa, as well as to avoid conflicts among pastoralists (the majority of the population), which are caused by the scramble for resources when drought hits. Food-secure pastoralists can minimize their movements to other territories, which would otherwise eventually end up in clashes and conflicts with other pastoralists.

Somaliland has the potential to reverse the shocks that have destabilized an already weak economy if the right tools and approaches are used. Good governance and further investment in the production sector will enable the Horn of Africa to gain stability and minimize unnecessary conflicts arising from issues that can be solved.

Helping the physically disabled in Afghanistan: a lifetime’s work

COVID-19 Vaccine: Ensuring that people affected by armed conflict are not forgotten