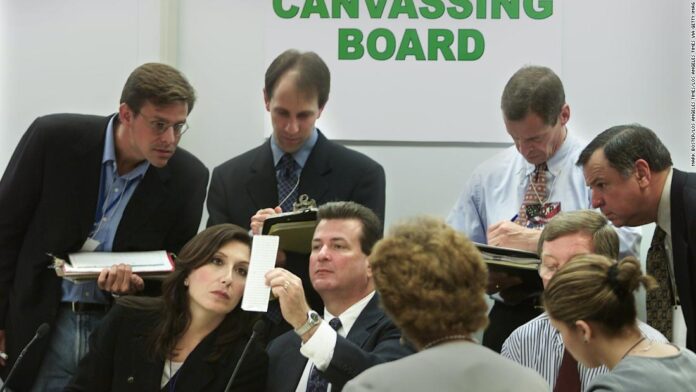 Director Billy Corben knows Florida well, and he niftily sets up the key players in a drama that even the HBO movie “Recount” couldn’t entirely do justice. Yet he traces that back to the outrage triggered by the story of Gonzalez, whose mother died bringing him to the US, as her family wrestled with his father over the boy’s return to Cuba.
Democratic presidential candidate Al Gore split with the Clinton administration over the case, reflecting the importance of Florida in the 2000 race. “Everyone on both campaigns knew it was coming down to Florida,” recalls Gore attorney Mitchell Berger.
The Republicans, though, not only had that strongly motivated portion of the Cuban-American community on its side, but once the electoral skirmish began, a team of operatives who engaged in bare-knuckled tactics and sound bemused and completely unapologetic reminiscing about them now.
Indeed, the end-justifies-the-means attitude is summed up by none other than Trump ally Roger Stone, who tells the filmmakers, “Politics is about winning.” (In the documentary, Stone is accused by Bush campaign operative Brad Blakeman of inflating his role in what transpired, a contention that Stone shrugs off.)
Whoever deserves the credit and/or blame, the primary takeaway from “537 Votes” — aside from presenting Miami as a hotbed of craziness — is that while Gore’s representative, former Secretary of State Warren Christopher, wanted to send the world a broader message about decorum and democracy, Republican steadfastly focused on victory.Toward that end, their efforts to halt the vote counting — including the so-called “Brooks Brothers Riot” — were “run with care and with shrewdness and evil intent, and it worked,” Miami political reporter Michael Putney says.
Corben cleverly frames the unfolding story with cultural and musical artifacts of the era, weaving in snippets from “Saturday Night Live,” “The Daily Show” and “South Park” to underscore how Florida became a national punchline (in a way that has largely lingered until today), while everyone suddenly became an authority on the subject of “hanging chads.”
Among other things, the election-night section includes clips of then-CBS anchor Dan Rather going hog wild with his famous Dan-isms, saying the heat from Florida — as the state moved in and out of the Gore, Bush and “too close to call” columns — was “hot enough to peel housepaint.”
Perhaps the most fascinating figure in the documentary is then-Miami-Dade County mayor Alex Penelas, who appeared destined for bigger things (he was dubbed “The Great Cuban Hope” as well as People magazine’s “sexiest politician”) before his role in the 2000 campaign.
While some of the details might have faded with memory, “537 Votes” nicely encapsulates the descent of politics into a blood sport where rivals are viewed as enemies, not opponents. Wherever one falls on the political spectrum, reliving the tumult and mayhem of that campaign it’s reasonable to hope the past isn’t prologue, and that what happened in Florida two decades ago doesn’t serve as the extended trailer for 2020.
“537 Votes” premieres Oct. 21 at 9 p.m. on HBO. Like CNN, HBO is a unit of WarnerMedia.