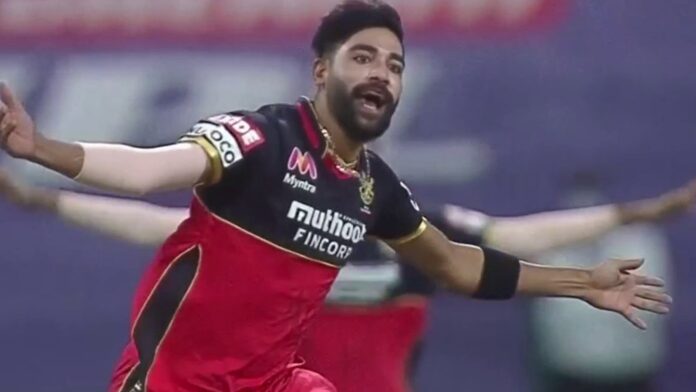 Mohammed Siraj took 3-8 on his return to the Royal Challengers Bangalore side as Kolkata Knight Riders suffered a heavy defeat in the Indian Premier League.

KKR skipper Eoin Morgan opted to bat first in Abu Dhabi but two wickets in two balls from Siraj left them 3-2 in the second over, that soon became 3-3 and then 14-4 as RCB’s bowlers piled on the pressure.

Morgan offered the only real resistance for Kolkata but when he fell for 30, they were 57-7 and eventually limped to 84-8 from their 20 overs.

RCB raced to 46-0 in reply and even after losing both openers in the same Lockie Ferguson over, the result was never in doubt, with Virat Kohli (18no) and Gurkeerat Singh (21no) getting them home with more than six overs to spare.

The win moves RCB up to second and level on points with IPL leaders Delhi Capitals, the Knight Riders stay fourth but are just two points ahead of an in-form Kings XI Punjab and Rajasthan Royals in the final play-off spot.

Kolkata’s problems started midway through the second over when Siraj had Rahul Tripathi (1) caught behind and then castled left-hander Nitish Rana (0) next ball.

Navdeep Saini (1-23) then had Shubman Gill (1) caught at midwicket by Chris Morris in the next and although the fast bowler was superbly driven for four and then pulled for six by Tom Banton (10), Siraj backed up his double-wicket maiden to start by cutting short the England man’s counter in the fourth over, enticing another edge through to AB de Villiers.

Morgan and Dinesh Karthik tried to rebuild, working the ones and twos for a couple of overs with the hope of being able to kick on later and salvage the innings but that plan was scuppered by Yuzvendra Chahal. The leg-spinner hitting Karthik (4) on the pad and getting the lbw decision after a review.

Pat Cummins lasted 17 balls but with just four to his name, tried to get after to Chahal (2-15) but only managed to pick out long off to leave KKR 40-6. Morgan added a couple of boundaries in quick succession as he tried to get the score moving but mistimed another big shot and was caught at deep midwicket off Washington Sundar (1-14).

Kuldeep Yadav (12) and Ferguson (19no) were able to push the score up a little in the final over before the former was run out coming back for two from the last ball of the innings.

Any hope of a miraculous fightback from KKR was quickly extinguished as Aaron Finch and Devdutt Padikkal eased the Royal Challengers to 44 without loss at the end of the powerplay.

Ferguson came into the attack for the seventh over and made the breakthrough, Finch caught behind as he went after a wider delivery that bounced a little more than he was expecting. Padikkal was then run out after finding himself at the the same end as Gurkeerat, allowing Cummins to run in form midwicket and take off the bails at the other.

That was as good as it got for KKR though, Kohli and Gurkeerat untroubled for the next few overs with the skipper left to hit the winning runs midway through the 14th over.

Watch every match of the 2020 IPL live on Sky Sports Cricket. Rajasthan Royals vs Sunrisers Hyderabad is Wednesday’s match with coverage from Abu Dhabi beginning at 2.50pm.