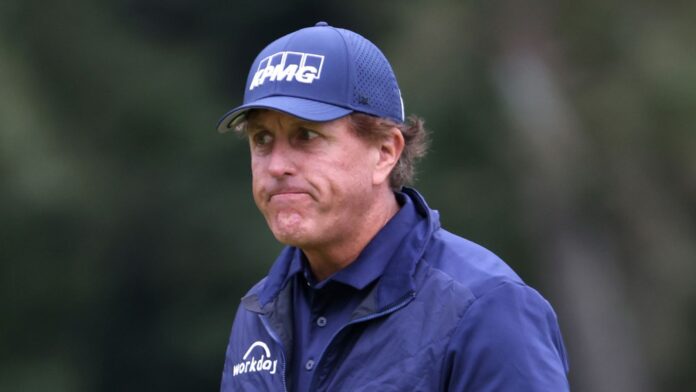 Phil Mickelson admits he would not feel comfortable playing in front of the returning fans at the Houston Open and feels it is a risky move a week before the Masters.

The Houston Open will see the return of spectators to professional golf on the PGA Tour for the first time since the coronavirus shutdown, with a maximum of 2,000 fans permitted to attend each of the four tournament days.

But while Mickelson praised the PGA Tour for their handling of health and safety protocols since golf resumed in June, he does not want to run the risk of contracting COVID-19 ahead of the final major of the year at Augusta National.

The 50-year-old, who has won his first two starts on the PGA Tour Champions, revealed he will now consider playing in the Charles Schwab Cup Championship in Phoenix, the final event of the season for the seniors.

“I think the PGA Tour has done an incredible job getting the players to play and compete in a safe environment,” said Mickelson, who is in the star-studded field at this week’s Zozo Championship, where Adam Scott has withdrawn after testing positive for coronavirus a week after world No 1 Dustin Johnson was also diagnosed with COVID-19.

“We’ve had a few people test positive, but it has not spread from those people. They’ve kept everybody at a good social distance so if somebody does have it, it hasn’t affected and carried through the Tour.

“I think they’ve done a phenomenal job of having us feel safe, and I think that they will do a very good, safe job in having 2,000 people at the Houston Open. However, for me personally, I don’t like the risk that having that happen the week before the Masters.

“I just feel like the week before the Masters, like that’s a big tournament we have and I just don’t want to have any risk heading in there. So it has made me question whether or not I’ll play there.

“But then I have to give the Tour a lot of credit and confidence in the way that they’ve handled the entire year and I’m sure they’re going to do a great job at keeping the players safe in that environment.

“But because I haven’t seen it before, because it’s the first one out on the Tour with some people, I’m unsure and I don’t want to take any unnecessary risks. I don’t go out to dinner, I don’t go out and socialise because I want to make sure that I have an opportunity to compete in the Masters.

“I think the PGA Tour players, caddies and everybody involved has done a great job of being accountable to themselves and each other and being safe and making sure that the game of golf is able to continue to go on and compete. And the Tour’s done a great job, too.

“There were a few false positives earlier on and those are the things that worry me because that’s the scare. Because I know that I’ve been able to stay safe, that my circle of Andrew Getson and Tim and Amy and everybody has been safe, so we’ve all made those precautions, but the false positive is the thing that scares me.