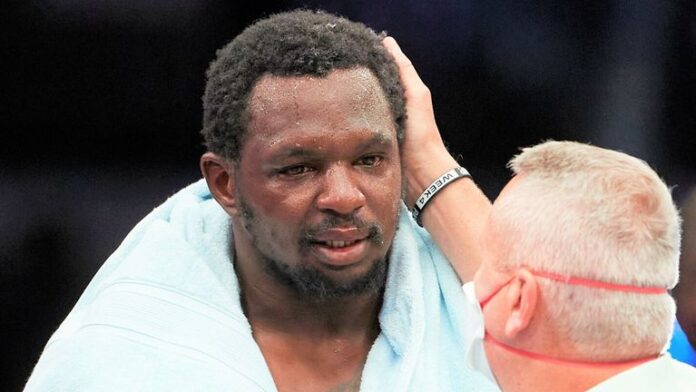 Dillian Whyte was not caught by a ‘lucky punch’ from Alexander Povetkin, who had hit Derek Chisora with the same brutal uppercut in sparring, says David Haye.

The British heavyweight rivals are preparing for career-changing fights as Chisora collides with Oleksandr Usyk on October 31, while Whyte battles Povetkin in a rematch on November 21, both live on Sky Sports Box Office.

Chisora has sparred with Povetkin in the past and was not surprised that he delivered a fight-ending uppercut on Whyte, says manager Haye, who insists the Brixton man did not just pay the price for a momentary lapse.

Asked about Povetkin-Whyte 2, Haye told Sky Sports: “It’s a very dangerous fight and it’s a fight that I think Dillian doesn’t want to accept it was nothing other than a lucky punch.

“He thought, ‘I was winning the fight’, which he was, ‘I had him knocked down twice in the fourth round and I was winning the fifth round until I got hit by one shot and that was it’. Anything can happen in boxing, it happens in the heavyweight division.

“I don’t think that’s the mindset you need. You can’t say, ‘You won because it was an anomaly’. That left uppercut that he threw knocked out Carlos Takam, in a very even fight, in a very good toe-to-toe fight.

💥1 month to go until @DillianWhyte gets his shot at revenge 🥊

“It’s a shot that he throws regularly. Derek was telling me when he sparred with him, he was getting hit with that shot, so it’s one of his shots, and to get hit with someone’s best shot isn’t very lucky is it.

“The guy has got a big shot. It’s like getting caught with Dillian Whyte’s left hook. You know it’s there if you can practise to go under it, if you throw your right hook to the body or not, or you can stand up and get knocked out.”

But Haye has backed Whyte to defeat Povetkin in the rematch, if he makes the necessary tactical changes, just as Anthony Joshua did in his return bout with Andy Ruiz Jr last December.

“I think he’ll win the rematch. I think he’s too fresh,” said Haye.

“He needs to make sure the issue that he had in that Povetkin fight doesn’t happen again and he can prove that, the same way that AJ did against Andy Ruiz Jr.

“You can learn. He didn’t have a deep wealth of amateur pedigree. He comes from a kickboxing background, a few amateur fights, and then he jumped straight into the pros and had to do it the hard way.

“He’s a seasoned guy, but he doesn’t have the technical pedigree that Anthony Joshua has – an Olympic gold medal. Povetkin is another Olympic gold medallist, so he needs to use his attributes which is rough, tough, physical.

“He was trying to get too close and have a technical back and forth and I’m like, ‘Why do you need to do that for?’ Why don’t you do what you do best and that’s hit people with jabs and throw big, massive left hooks that knock people out?”

The heavyweight division serving up some 🔥from now until Christmas 🥊

Whyte has previously confirmed that he intends to make technical adjustments to nullify Povetkin’s uppercut but remains confident he will avenge his loss.

“Credit due to Povetkin, fair play to him, he threw a good punch and it landed and what more can I say,” Whyte told Sky Sports earlier this month.

“Now we go into camp, we put it right, we come back again. I believe I beat Povetkin nine times out of 10.”