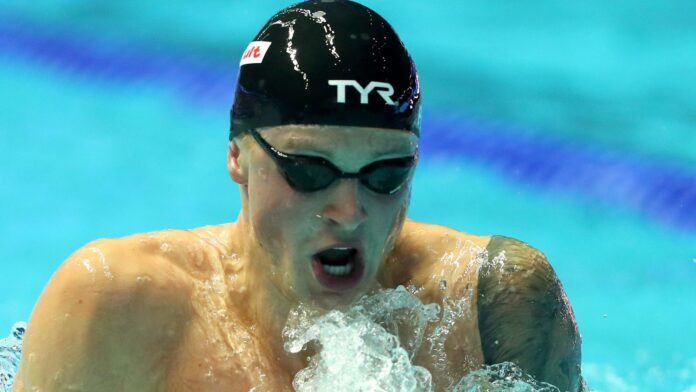 Adam Peaty says the unique circumstances of 2020 with lockdown training and competition in the bubble of Budapest at the International Swimming League could actually be the trigger for yet another world record as he looks to defend his 100m breaststroke gold at the Tokyo Olympics next summer.

Peaty, 25, is in Hungary for six weeks until November 22 racing for London Roar, in what is his first action since March.

“I’m very grateful we can race but it doesn’t come without its difficulties when you’re in a bubble,” he said. “You’re in your hotel room quite a lot but it’s what it takes and I’ve got five matches left to get going.

“The first match was good, I was really impressed by it and it’s exactly what the sport needs. All you do is swim, train, swim, sleep, swim. Everything’s about swimming.”

It also means Peaty is now basing his Olympic plans on the assumption that Tokyo 2021 will be a lockdown Games too, with another bio-bubble for athletes.

He said: “100 per cent, no question about it. I can’t see it going ahead without extreme procedures being in place like this. There’s too many lives at risk, especially in Tokyo where the population density is so high and with an ageing population as well – it’s too much of a big risk.

“I’m already preparing to be in full lockdown in a bubble and then get to my performance that way. If we prepare for the worst then if anything else better comes along, we’re already winning.”

He’s bullish about the prospect of smashing his own 100m world record of 56.88 set at the World Championships in Gwangju last year.

“I do believe that wasn’t my final or my best form in South Korea,” he said. “There’s always something you can improve on to go faster. I know there’s a few tenths in there at least because South Korea was quite challenging in terms of the food, environment and my headspace back then. I know I can get faster. It’s just when and where and hopefully that when and where is at the Olympics.”

Peaty is, however, again ruling out any notion that he might also attempt the 200m in Tokyo.

“Some of the Russian and Australian boys who are world leaders are up to 20kg lighter,” he said. “That’s 60 strokes where I’m carrying an extra 15kg. That will help in the 100m and allows me to have more strength and power. Simply if you want to push the boundaries of where the human body can go in the 100m, you stay at this weight.”

Peaty feels attempting the 200m would be a risk and says simply “that’s not good enough”.

All this after a 2020 of lockdown training, shifting goals and a postponed Olympics after a training pool was craned into his back garden.

Yet Peaty thinks that the pandemic may actually have helped him.

“It does mess with your mind a little bit but I saw it as an opportunity to improve. I did a lot of cycling and weights in my gym and put a lot of weight on which is helping now because I’ve lost that but kept the strength.”

Another thing may have helped. Fatherhood. Peaty became a dad last month to baby George with his partner Eiri. He says it’s calmed him down and given him a little bit more perspective.

“It was the greatest moment of my life when I saw him come out,” he said. “I did shed a tear. I shed a tear too when I had to leave. But I am making sure that I do call every single day for a least an hour and read him a book before he goes to bed.”

Peaty says his baby son means he sees the world in a different way but the Olympic champion still remains totally focused on succeeding next year.

“An addiction to that goal of becoming faster and better which is unhealthy sometimes, but a lot of the time it does get the job done.”

He’s predicting a good Games in the pool too for Team GB because he thinks they go to Japan with depth for the first time, and with other medal hopefuls now looking to Peaty as a world-beating role model.

“The culture has completely changed because we’ve had a shift of age. So I am now one of the veterans, one of the most experienced on the team. They look up to what you do and your attitude. There’s no easy way round being the best athlete in the world and a lot of athletes are catching onto that and in turn their performances are getting better.”

Peaty has reiterated his desire for leisure centres to remain open for swimming pool access in the UK – despite tier three coronavirus restrictions across northern England.

Peaty says pool infections are extremely low and insists people rely on the leisure centres for their mental and physical health.

The 2016 Rio gold medal winner wants public access to swimming to remain, despite the toughest government restrictions, so that people get their daily dose of fitness.

“I know as a swimmer what they put in the pools because it literally tears my skin away. When there’s chlorine and special safeguards you can put in place you have to ask the question, is closing the leisure centres which are already struggling, actually going to do anything?”