Home Top News Bangladesh | FAO and Rohingya refugees restore forests in and around once... 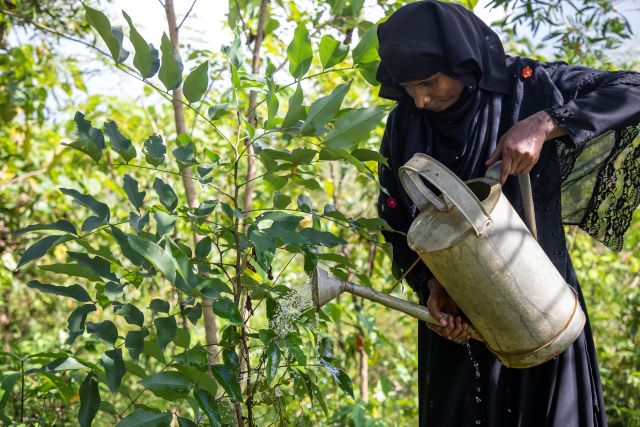 The degradation of land within and near the refugee camps in Cox’s Bazar, Bangladesh, was a crisis within a crisis, but FAO has been at the forefront of planting millions of trees with help from the refugees themselves.

Based on satellite imagery, FAO estimates that 7 220 ha of forestland had been degraded, threatening wildlife habitats, biodiversity, and ecosystems.

The environmental crisis was recognized early in the response in 2017 by FAO and the International Organization for Migration (IOM), who assessed food fuel supply and demand. In late 2018, FAO piloted liquefied petroleum gas (LPG), distributing the cooking fuel to refugees and the host community.

This developed into the Safe Access to Fuel and Energy (SAFE plus) project – an FAO, IOM, and World Food Programme (WFP) joint initiative to address sustainable energy needs, environmental restoration, and resilient livelihoods.

FAO is leading reforestation activities and, together with the Forest Department, developed a land stabilization method, promoting plantation of various fast-growing indigenous species. FAO has restored nearly 258 ha of land inside the camps, and together with the Forest Department, a further 2 000 ha of forestland that surrounds the camps. This has involved the planting of millions of trees, plus measures to protect elephants.

The refugees, through a cash-for-work initiative, have played a crucial role in supporting the land rehabilitation through the planting and care of trees, shrubs, and grasses

Rohingya refugees in their own words

Mohammad Selim, 35, recalls the day when he walked into Bangladesh with his family in August 2017. “I walked for 21 days from Buthidaung, Myanmar, into the camp in Ukhiya, Cox’s Bazar, with my wife and elderly parents and carrying my two young boys,” he said.

Since then, nearly one million Rohingyas like Selim have escaped violence across the border in Myanmar, taking shelter in the hillsides of Cox’s Bazar. Much of the area’s protected forest, which was already being damaged, was cut down for shelter and fuel, dramatically increasing the risk of flash floods and landslides due to soil erosion. Lack of trees meant that there was little shade in the severe summer heat and frequent landslides during the monsoon.

“We got food and other items, but we needed fuel to cook. We had to collect wood from nearby forests and bushes,” Selim recalled.

The father-of-two now enjoys his job helping to care for the trees and plants. “There are fewer landslides now, as the hills and roads are stable with more trees. We feel comfortable and protected,” he said.

Raham Khatun described the camp as looking like a desert when she first saw it. “It was a like a desert, a barren land. There were no trees to be seen whichever direction you looked.

The entire area felt lifeless. There was no shade and we had to suffer under scorching sun”, she said.

In order to have fuel to cook, Raham dug up the remaining tree roots and also walked long distances to the nearest forest to collect firewood – a sometimes dangerous journey for women who were vulnerable to sexual assault. Now she cooks with LPG.

The 35-year-old refugee also wanted to do something to restore the greenery to the camps, and has been working with FAO since 2018, planting trees and shrubs, watering plants, carrying out maintenance work, and guarding the trees. “There was only mud when I first started planting. I watered the plants every morning,” she said.

The replanting of trees has had a number of benefits. There are fewer landslides because the trees bind the soil. The trees offer shade and create a more pleasant environment. They have also improved the quality of the soil, meaning that many refugee families can grow their own vegetables for the first time in the camps.

“We feel protected now and the shade gives us comfort”, said Selim. She added: “There is a huge need of more plantation in other parts of the camps so that they also feel the same. If we plant more, people will feel better.”