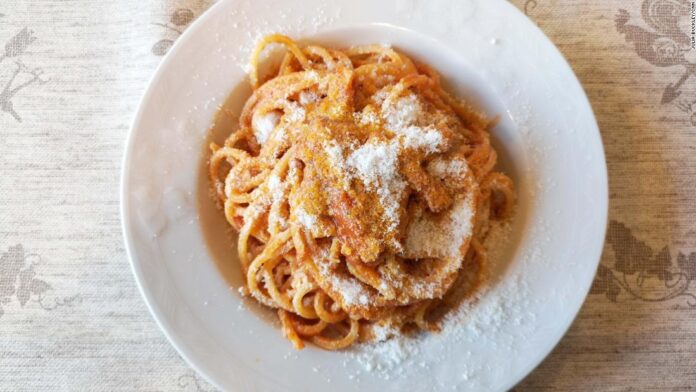 (CNN) — What’s Italy’s best pasta sauce? That’s the kind of question that can start a fight in the home of spaghetti and tortellini.

Will it be Bologna’s meaty, slow-cooked ragu — so famous that half the globe has bastardized it and called it “bolognese?”

Liguria’s nutty, basil-flushed pesto? Or how about carbonara — a full-on carb load of pasta slathered in eggy, cheesy sauce with hunks of pecorino cheese?

Maybe it’s the red stuff. For many, a great pasta dish needs tomato in it, and for those kind of people, amatriciana is the sauce to end all sauces.

Thick, sweet tomato sauce pepped up by guanciale (an extra-flavorful kind of bacon from the pig’s cheek), warmed by plenty of pepper or chilli, and with pecorino cheese giving it texture, it’s one of the classics.

But although its fans around the globe think of amatriciana as their carby comfort blanket, the dish’s recent history has been tragic.

It is thought to have been invented in the town of Amatrice, in Lazio, Italy’s central region that’s also home to Rome. While Rome is on the western side, however, Amatrice lies 90 miles northeast, closer to Italy’s eastern coastline, in a basin in the Apennine mountains.

It borders the Gran Sasso e Monti della Laga National Park, which sprawls across 150,000 hectares and three regions of central-southern Italy. The park is one of the largest protected areas in Europe, known for its golden eagles, brown bears and Europe’s southernmost glacier.

But the area around the park has been at the center of Italy’s earthquakes in recent years.

In 2009, an earthquake near the city of L’Aquila, an hour due south of Amatrice, killed 308 people and rendered around 65,000 homeless. The city is still in the process of rebuilding.

And in October 2016, Norcia, an hour northwest of Amatrice, was hit by a 6.6 magnitude quake, whose tremors were felt across the country, from Rome to Venice, 260 miles away. It, too, has yet to be fully rebuilt.

The aftermath of the earthquake.

Amatrice’s turn came on August 24, 2016, at 3:36 a.m. An earthquake measuring 6 on the Richter scale destroyed almost the entire town in 142 seconds, as well as the nearby settlements of Arquata del Tronto, Pescara del Tronto and the epicenter, Accumoli.

It killed 299, with another four victims dying later. Most of the dead were in Amatrice. “Amatrice no longer exists,” the mayor at the time, Sergio Pirozzi, told reporters in the morning.

Nearly 400 people were injured, and 41,000 lost their homes. Four years on, most are still living in temporary accommodation.

What used to be the main street in Amatrice, October 2020.

Today, little has changed. The center of town — or what remains of it — is an army-controlled zone, with pedestrians banned. Driving up what was once the pretty main street, Corso Umberto I, only a few buildings remain, held up by scaffolding: a couple of bell towers, the vaulted hull of a church.

Beyond the old town are more buildings, held up by scaffolding; others which appear to have survived or been rebuilt; and temporary huts where the town’s remaining inhabitants live and shop. A statue of 16th-century artist and architect Cola dell’Amatrice has been restored, and sits at the edge of the disaster zone, next to a sign banning selfies.

And at what used to be the end of town is a collection of stylish modern buildings, hastily constructed around a pseudo piazza. The Area del Gusto, della Tradizione e della Solidarietà (Taste, Tradition and Solidarity Area) was designed in 2017 by architect Stefano Boeri — responsible for the world-famous “vertical forest” in Milan.

The town is surrounded by mountains.

Surrounded by the green mountains, it’s a space that has drawn together the remaining restaurants from the town. And amatriciana takes pride of place.

The museums and churches may be destroyed, but thousands of tourists still come to Amatrice to eat its most famous pasta dish. And even in a glorified shed, it’s still one of the most memorable meals you can have in Italy.

Your favorite spaghetti dish, in situ

At Ristorante La Conca, Elisabetta Perilli doesn’t have a printed menu. Instead, she tells you what’s available — and it’s all what Italians called “chilometro zero,” sourced from the local area.

To start with, a platter of local cured meats and salami is the way to go — Norcia, an hour away, is world famous for its cured ham.

But afterward there’s only one thing the tourists want to eat: spaghetti all’amatriciana.

So how is it different from the amatriciana we eat all around the world?

At La Conca, the Perilli family uses square-cut spaghetti instead of round, as it gives more surface area for the sauce to permeate. The pasta is also rough-textured, rather than smooth, so that it’s easier for the sauce to stick to it.

Amatrice has an annual pasta festival, although it was canceled in 2016 and 2020.

And if you’re used to amatriciana with a kick of chilli, you’ll be surprised — because here, although they do add chilli, most of the spice is coming from regular pepper. That makes it less spicy than what you might be used to, but smoother, and warmer, almost with a hint of nutmeg. It’s a warmth that spreads across your mouth as you eat. It’s more subtle than the amatriciana you might be used to — and it’s masterful.

As for the guanciale, Perilli says the most crucial thing is that it needs to be clean. The family used to produce their own, but, like everyone else here, they lost their animals and their curing room in the earthquake. Today, they buy guanciale from a producer not far away.

The aftermath of the earthquake

Residents reinstalled a statue of Cola dell’Amatrice, a renaissance-era artist and architect.

Like everyone else in Amatrice, the Perilli family were hit hard by the earthquake. Their house in the town center was completely destroyed, as was their restaurant, which her father, Gabriele, had opened in the 1950s, and had been popular with Italian celebrities including singer Adriano Celentano.

“You should have seen our restaurant,” she says, pointing at a photo of Celentano with Gabriele — who made a cameo in his film, “Serafino” — on the wall. “We had photos everywhere. It was more beautiful.”

Yet she calls her family “lucky” because they had land — so they built two wooden chalets to live in, rather than having to move into the estate of prefab huts that other residents from the town center have moved into.

And the slow bureaucracy of the recovery process means that residents don’t know if, or when, their houses will ever be rebuilt.

Visitors are not allowed to walk through the former center of town.

“Those of us with houses in the center still don’t know if they will rebuild them in the center, or move them outside,” she says. “We went from a peaceful city to a disaster.

“The town is a building site now. We can’t walk there. Our houses have been flattened, and we can’t visit where they were. There’s nothing.”

After the earthquake, residents were allowed to return to what remained of their houses to see if they could save any possessions. Then the town was walled off, and was deemed a military zone. Residents can drive through, but cannot stop, cannot get out, and cannot visit the site of their old homes.

The secret of a great amatriciana, according to the Perillis: making sure the guanciale is clean, and cooking it with the rest of the sauce, using the meat’s fat to fry the mix, instead of cooking the vegetables in olive oil first.

There’s just one problem. According to Elisabetta, ordering amatriciana in Amatrice is what marks you out as a tourist. The real dish of Amatrice, she says, is spaghetti alla gricia — a ‘white’ (tomato-free) amatriciana, whose ingredients are nothing but guanciale, pepper, and pecorino cheese. This is thought to be the original dish of Amatrice, with residents adding tomato only in the 19th century.

The dishes’ fame — though they originated here, both gricia and amatriciana are closely associated with Rome — meant that Italians rallied to support Amatrice after the earthquake.

“We were lucky,” says Perilli. “People donated, and gave us the chance to start again.” The Area del Gusto was built with donations raised by the Corriere della Sera newspaper and L7 TV channel, and allows those residents who have stayed — because many of those who could, left — to earn again.

“We had fewer people here this summer, but many Italians on holiday come here. There are no hotels left, but they come for lunch,” says Perilli.