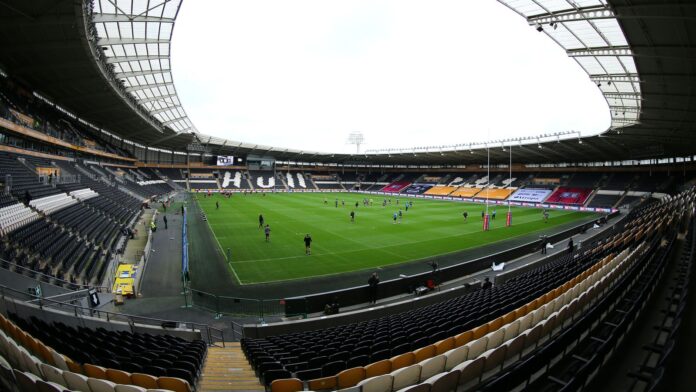 In a further break from tradition, the climactic game of the season will be played on a Friday night, kicking off at 8pm on November 27 live on Sky Sports.

Super League executive chairman Robert Elstone made no secret of his disappointment the Grand Final will not be played at the ground which has hosted it since it was first held in 1998, but added there was little alternative.

🗣️Super League executive chairman Robert Elstone on the decision to play the 2020 Grand Final at the KCOM Stadium 🏟️#SuperLeague pic.twitter.com/WOI1kOECRI

“It’s disappointing we’re not at Old Trafford and most disappointingly of all there won’t be 70,000 fans enjoying our climax of the season,” Elstone told Sky Sports.

“Covid has obviously had some really challenging effects on Super League and Manchester United’s fixture list, we had a need to finish our Super League season by the end of the month so we had that as a deadline and we waited nervously for United to get their Premier League and Champions League fixture lists.

“The combination of all that meant Old Trafford wasn’t available to us. It’s really disappointing, Manchester United have been a great partner to work with, but we just couldn’t find a solution to make it stick at Old Trafford.”

Venue availability was one of the key criteria Super League looked at when deciding on an alternative to Old Trafford, with the amount of Champions League matches on the horizon ruling out most other football venues in the north-west.

It’s really disappointing, Manchester United have been a great partner to work with, but we just couldn’t find a solution to make it stick at Old Trafford.

Budgetary factors came into consideration as well, as did prestige and consideration of how the venue will look on television due to this year’s Grand Final set to be played behind closed doors due to continuing coronavirus restrictions.

“We looked at many, many alternatives,” Elstone said. “There were a number of criteria, availability was the most important one and Champions League football meant a lot of north-west venues were unavailable to us.

“The KCOM ticked a lot of those boxes. We reviewed a number of options and across those four criteria, the KCOM was in our view the absolute right choice for us.”

In a statement issued by Super League, Elstone added: “We are excited about the new kick-off time. Friday nights have always featured strongly in the rugby league calendar.

“We set the bar high last year with a record television audience and we are confident that the 2020 Super League Grand Final at the KCOM will build on that success, writing another exciting chapter in the Grand Final’s proud and compelling history.”