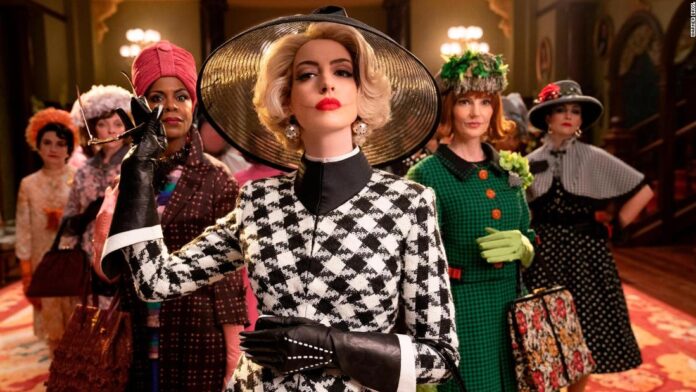 Dahl has a storied if uneven screen history (see “Willie Wonka and the Chocolate Factory” and less successfully “The BFG”), but this story truly falls into a no-man’s land, a bit too frightening for younger kids and too cartoonish for older ones.
That leaves their parents, who might get a kick out of Anne Hathaway’s thickly accented, scenery-devouring performance as the Grand High Witch — much like Anjelica Huston’s portrayal three decades ago — without feeling compelled to visit a theater to consume it.
As for the aforementioned auspices,, the movie was directed by Robert Zemeckis, whose lengthy resume includes such pertinent titles as “Who Framed Roger Rabbit” and “The Polar Express.” The script, meanwhile, is credited to Zemeckis, “Black-ish” producer Kenya Barris and director Guillermo del Toro, who at one point contemplated a stop-motion-animated version. That mix of sensibilities yields a concoction seemingly plucked from the lower rungs of Tim Burton’s filmography, with eccentricity as the main attraction.
The most significant change involves relocating the story from England to Alabama in the 1960s, which offers a fresh spin in some respects (including the racial overtones), but not in a defining way.
The protagonist remains an orphaned young boy (“Atlanta’s” Jahzir Kadeem Bruno, with Chris Rock narrating the movie as his adult incarnation), forced to live with his grandma (Octavia Spencer) after the death of his parents. Grandma is wise to the ways of witches, warning him that they “hate children,” approximate human form and “prey on the poor, the overlooked.”
Facing such a threat, the pair head to a posh hotel to hide out for a while, but as luck would have it, the place is actually hosting a witches’ convention. When the boy inadvertently stumbles upon the gathering, he’s transformed into a mouse, before trying to thwart the coven’s nefarious scheme with the help of some rodent-sized friends.
After a somewhat leisurely start, “The Witches” becomes a fairly madcap caper with not-very-distinctive computer-animated characters. The result is basically a cable Halloween movie with a better-than-average cast, which includes a mini-“The Devil Wears Prada” reunion of Hathaway and Stanley Tucci as the hotel’s officious manager.
HBO Max (like Warner Bros. and CNN, a unit of WarnerMedia) might reap benefits from presenting families this youth-oriented title as a streaming treat, but this likely would have represented a tough sell theatrically under the best of circumstances.
In that respect, “The Witches” joins a generally disappointing list of children’s movies redirected to streaming since the coronavirus outbreak began, reflecting a fairly clear-eyed assessment by studios of their potential. (The film will still receive a theatrical release in selected markets around the world.)
For cinephiles, “The Witches'” auspices possess some intrigue, including Oscar-winning director Alfonso Cuaron among the producers. Beyond that sense of curiosity, this long-gestating potion doesn’t justify all the toil and trouble.
“The Witches” premieres Oct. 22 on HBO Max.