Home Culture Noah Cyrus was the talk of the 2020 CMT Music Awards because... 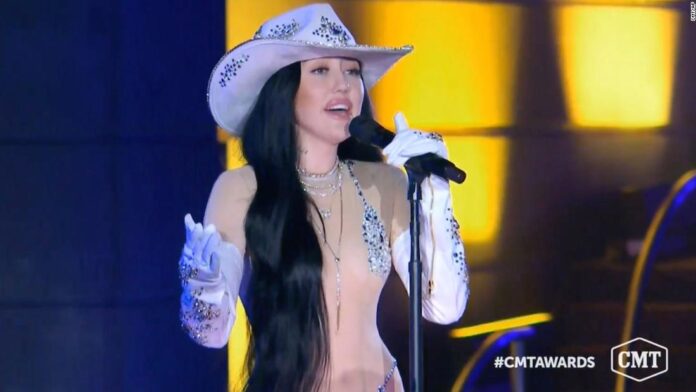 The singer performed the single, “This Is Us,” with Jimmie Allen.
It wasn’t the song but her outfit that caused buzz.
Cyrus rocked out in a sheer bodysuit with strategically placed rhinestones, thigh-high white boots, long white gloves and a white cowboy hat.
The “Is she naked or not” look won Miley’s younger sister both praise and condemnation on social media.
She donned a slightly more sedate look for her red carpet: a denim outfit that included a midriff-baring halter top and cowboy hat.
For the record, here’s who won at the awards:

VIDEO OF THE YEAR

FEMALE VIDEO OF THE YEAR

MALE VIDEO OF THE YEAR

GROUP VIDEO OF THE YEAR

DUO VIDEO OF THE YEAR

BREAKTHROUGH VIDEO OF THE YEAR

COLLABORATIVE VIDEO OF THE YEAR

Blake Shelton with Gwen Stefani – “Nobody But You”

CMT PERFORMANCE OF THE YEAR

From CMT Artists of the Year: Chris Young – “Drowning”

QUARANTINE VIDEO OF THE YEAR (SOCIAL ONLY AWARD)