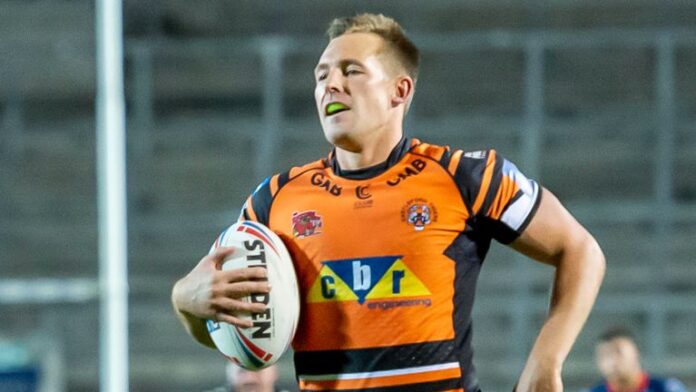 Despite having arrived late in St Helens due to being stuck in traffic on the M62 and kick-off being put back an hour as a result, Castleford made a flying start and ran in four tries in the opening 24 minutes before Rovers pulled it back to 26-18 at the break.

The Robins, overseen by assistant coach David Hodgson with Tony Smith in self-isolation, kept plugging away in the second half, but former player Eden crossed another two times to go with his first-half score and sealed a much-needed win for Daryl Powell’s side.

However, a strong run by forward Junior Moors created the position for hooker Jacques O’Neill to score the first try from dummy half while second rower Alex Foster dribbled the ball to the line from Mike McMeeken’s offload to grab the second.

The Tigers then took full advantage of a knock-on near his own line by winger Ben Crooks to add a third try through loose forward Adam Milner and Eden scored his first try after intercepting Weller Hauraki’s pass 40 metres out from the line.

Danny Richardson kicked all four conversions to make it 24-0 but Rovers, playing with the freedom afforded to them without the fear of relegation, struck back with three tries in 10 minutes to haul themselves back into contention.

Loose forward Elliot Minchella sparked the fightback, getting prop Robbie Mulhern through a gap in the Castleford defence for the first try, before winning the race to Jordan Abdull’s grubber kick for the second.

Will Dagger kicked both conversions to halve the deficit and he was also on target after a delayed pass by half-back Rowan Milnes got centre Shaun Kenny-Dowall over for the Robins’ third try.

Richardson stopped the rot with a penalty on the stroke of half-time and Castleford looked to have regained control three minutes into the second half when Eden took Paul McShane’s cut-out pass to score his second try.

Richardson’s sixth goal from as many attempts opened up a 14-point gap but still Rovers were not finished as they exposed further chinks in their opponents’ fragile defence.

Back rower Matty Gee had a try disallowed by video referee Tom Grant, but there was no denying hooker Matt Parcell as he stepped out of tackles to score his side’s fourth try on 64 minutes.

But Castleford always looked to have the edge and they made sure of the points when another clever cut-out pass by McShane enabled Eden to complete his hat-trick seven minutes from the end.

Richardson lost his 100 per cent record by missing the conversion but wrapped up the scoring with a last-minute penalty.