Home Sport ‘Mayweather did have KO power – I saw it!’ 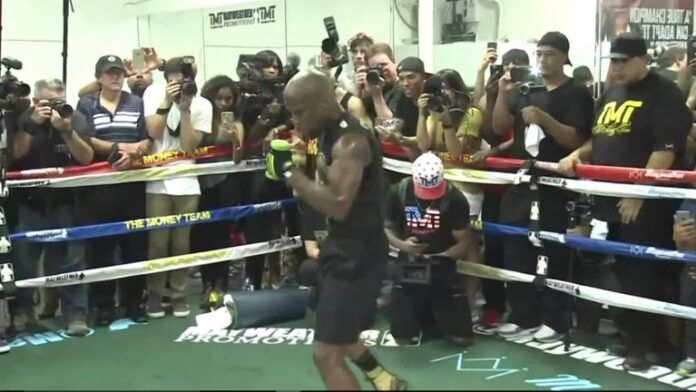 Floyd Mayweather knocked out sparring partners and demonstrated his ruthless side in the gym before fighting with a safety-first approach, says Ashley Theophane.

After stopping Ricky Hatton in his 39th fight, Mayweather had just one stoppage victory in his next 10 fights, which was the unusual finish of Victor Ortiz.

“He has KO’d a lot of guys,” Theophane, then a member of Mayweather Promotions, told Sky Sports.

“Many times when Floyd fought I thought he would win by KO because he was so ferocious in the gym.

“In the Robert Guerrero fight, I predicted Floyd to win by KO because he was a beast in the gym.

“The first time we sparred, I didn’t want to go in the ring with him. I had already seen him KO these guys.

Theophane’s journey from a gang lifestyle in London to joining Mayweather’s Las Vegas-based promotional team is chronicled in his book, Raised By The Hood, released earlier this year, a compilation of diary entry-like passages written throughout his career.

“I would write everything down,” he explained. “Each camp, I wrote what was going on.”

Many of those camps were spent in the pressure-cooker environment of Mayweather’s gym where the top dog was worshipped and his sparring partners were systematically intimidated by onlookers who would shout, heckle and bang on the ring canvas.

“I’ve been in the ring with Floyd and the guys do the same thing to me,” Theophane explained.

“They make ooohs and aaaahs when someone is getting beaten up but, if someone goes down, there is real concern.”

It is designed to break people’s spirit so only the strongest survive.

“Some guys go into their shell and it goes badly for them, but I embraced it,” Theophane says.

“I did well in the ring with Floyd so he bought me a new car.”

“My first spar with him was before he fought Saul ‘Canelo’ Alvarez. He had eight or nine sparring partners getting paid just to be there.

“For the first two weeks I hadn’t sparred but was getting my money – it was great!

“Then one of Floyd’s trainers comes to me and says: ‘It’s you today!’

“I was nervous and in awe of the man. But I did alright. He is so fast and sharp.

“You have to think so much in the ring with Floyd. He sets traps for you. You get tired just through thinking. You can’t make a mistake because you know he will make you pay.”

When Theophane got out of jail and survived a kidnapping attempt he vowed to turn his life around but found boxing opportunities in the UK hard to come by.

“Promoters can’t sign everyone,” he says. “I wasn’t a standout amateur so wouldn’t expect them to sign me. I did the small hall stuff but it’s hard to get an opportunity.”

A brave trip to a New York gym, famous for being used by Muhammad Ali among others, set Theophane on his unusual path.

“I went to Gleason’s Gym and they immediately embraced me, telling me I could become a world champion, so I just kept going there.

“I was scared, I didn’t know what to expect, I had never been to the US. But if I wanted to achieve anything I had to go, because I wasn’t going to get a break in the UK.

“It was an eye-opener. They were loud, brash, tough.”

That’s when, aged 32 and seeking respite in the US again, he chanced his arm by knocking on the door of the Mayweather Boxing Club.

“I didn’t know if I was allowed to go into Floyd’s gym,” he says.

“I said: ‘I’m Ashley, the British champion, can I train here?’

“Someone pointed me to Floyd’s uncle and said: ‘Ask Roger. If Roger says you can stay, then you can stay’.

“I spoke to Roger, told him what I’ve done in the sport. He looked me up and down and said: ‘You are alright’.

“Normally people aren’t allowed in the gym when Floyd spars, but I was there.

“Floyd looked me up and down and said to me: ‘We have to spar’.”

Mayweather never forgot the impression that Theophane made. Even when Theophane lost his British title, aged 33 with 37 fights behind him, he had a high-profile friend in Vegas who signed him up to Mayweather Promotions.

“It is impressive that this is a man getting paid hundreds of millions of dollars but he worked like he was still trying to get a break.”

Theophane’s book Raised By The Hood has been finished since 2016 and was planned to be released if he became a world champion.

His fight for the vacant WBA super-lightweight title against Adrien Broner, by then a sworn enemy of Mayweather’s, ended in defeat and remains the only stoppage loss of Theophane’s 59-fight career.

Instead, seeking the perfect conclusion and with Mayweather no longer as his promoter, Theophane took the quirky step of going on a world tour.

He has experienced a handful of fights in Germany, one each in St. Lucia, Luxembourg, Poland, Dubai, Ghana, Romania and two in Hungary. He called it quits with a 10-round decision win a year ago in Denmark.

The goal was to reach 50 professional wins which, he insists, has been achieved despite confusion over one result.

Theophane says he knocked out a local rival in Tijuana, Mexico, last year only for an irregularity in paperwork to cast the result into question.

It is a bizarre boxing tale from a unique career that would not have happened unless Theophane turned his back on a gang lifestyle in London.

Ashley Theophane’s book Raised By The Hood is out now.