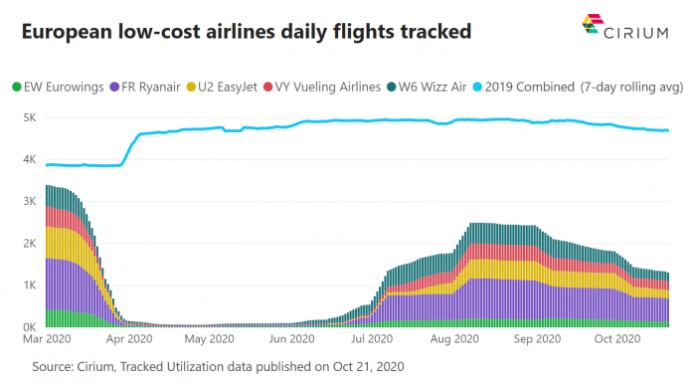 Carriers are reacting to a second wave of Covid-19 across the continent and the associated travel restrictions and quarantine requirements.

The principal operating divisions of Eurowings, Ryanair, easyJet, Vueling Airlines and Wizz Air had collectively clawed their way back to fly more than half the level of scheduled flights seen in 2019 on peak days during August.

However, as of October 20th, this figure had sunk back to less than 28 per cent.

Total daily flights by all European operators have declined by more 3,000 since the end of August on a seven-day average basis, to below 9,500 on October 20th.

North America has recovered to August’s level of just over 14,000 daily flights following a slight dip in September, although the outlook is challenging with Covid-19 cases on the rise in most US states.

Worldwide, international flights remain down more than 75 per cent globally versus 2019 while domestic markets have fared significantly better with a 36 per cent decline.

Cirium classifies 31 per cent of the global passenger jet fleet as having in-storage status, equivalent to more than 8,100 aircraft.