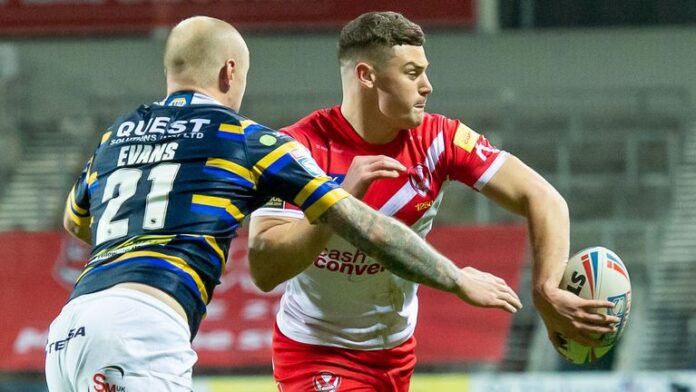 Teenager Josh Simm scored a first-half hat-trick as Super League champions St Helens effectively secured their place in the play-off semi-finals with a 40-8 rout of an understrength Leeds at the Totally Wicked Stadium.

The Rhinos fielded just four members of their Challenge Cup final-winning team as coach Richard Agar prepared for the rigours of four games in 10 days, and his youthful team were predictably no match for a Saints side close to full strength.

The consolation for Leeds is that they edged closer to the 15-game target they need to reach in order to qualify for the play-offs under the new system introduced to determine final league placings.

They will hit that threshold against Castleford on Monday and now need to finish above Catalans Dragons, who may struggle to fit in four more games before the end of the regular season.

Saints have no such worries. They played their 15th game on Friday night and victory keeps them in pole position going into the run-in.

Even against a virtual reserve team, it was easy to see why Kristian Woolf’s side are firm favourites to retain their title.

Led superbly by evergreen hooker James Roby, they had the edge in every facet of the game.

The 19-year-old Simm, who was making only his sixth Super League appearance in the absence of injured England international Mark Percival, opened his account after only two minutes, wrongfooting the Leeds cover with an arcing run to the line.

Saints managed to increase their lead while down to 12 men, with England prop Alex Walmsley in the sin bin for a dangerous tackle on Alex Sutcliffe, as Roby raced into space to get second rower Zeb Taia over for a try.

Walmsley was just returning to the field when man of the match Simm powered his way over for his second try and the youngster completed his hat-trick four minutes before half-time, when Saints led 22-0.

The game may have been beyond them by then but Leeds continued to show plenty of spirit and they pounded away at the Saints line early in the second half.

The champions were forced to defend three sets on their own line and the pressure eventually told when loose forward Cameron Smith took Brad Dwyer’s pass to force his way over for a deserved try.

But that was as good as it got for the young Rhinos, whose defence cracked twice in three minutes.

Leeds fashioned a well-worked first try for the club by promising winger Liam Tindall but Saints added a seventh just before the end through substitute hooker Aaron Smith and Lachlan Coote took his goal tally to six from seven attempts.