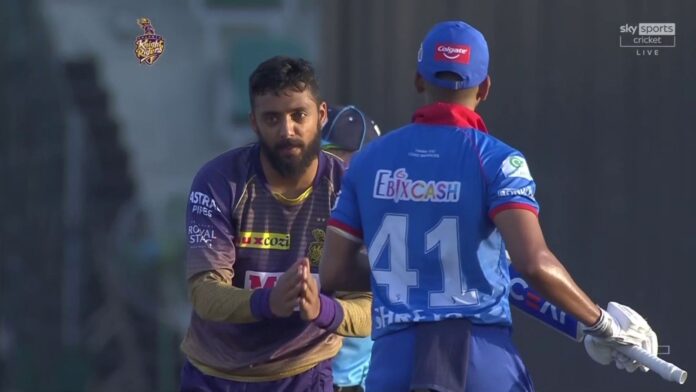 Varun Chakravarthy took the first five-for of the IPL season as Kolkata Knight Riders strengthened their grip on an playoff berth with a thumping 59-run victory over Delhi Capitals in Abu Dhabi.

Pat Cummins got rid of both Delhi openers early and Delhi never really recovered with KKR able to keep the runs down and claim wickets. As soon as the Capitals tried to push, even with relatively little spin on offer, Chakravarthy deceived a slew of Delhi batsmen with his subtle variations and changes of pace.

The leg-spinner ended with figures of 5-20, the best in this year’s tournament, as Delhi missed the chance to reclaim top spot and slumped to 135-9.

While Kolkata have opened up a four-point gap in fourth to the teams below them, Delhi’s hopes of a top two finish have taken a hit and they remain level on points with Mumbai Indians and Royal Challengers Bangalore, both of whom have played a game less.

A KKR win seemed a long way off early in their innings as Anrich Nortje, back in the Delhi side after injury, had Shubman Gill caught at point in his first over and then bowled Rahul Tripathi with a stunning yorker a couple of overs later.

Brilliant from Nortje! He nails the yorker to Tripathi and splatters the stumps! Good start for #DelhiCapitals, #KKR 35-2 after six. #IPL2020

The second of Delhi’s two South Africa speedsters, Kagiso Rabada, then had Dinesh Karthik caught behind and after their collapse against RCB earlier in the week, the Knight Riders were in danger of a repeat.

However, Morgan held himself back and sent in the returning Narine, a decision that proved to be inspired as the West Indian proceeded to hit Kolkata out of trouble.

Rana was the more measured of the pair but he was not particularly holding back either, reaching his half-century from 35 balls, shortly before Narine’s fifty came up from 24 deliveries.

Having smashed four sixes, Narine fell to Rabada trying to hit a fifth, bringing Morgan to the crease with a little over three overs to make an impact. The England skipper was up to the challenge, powering Rabada back down the ground for six as he and Rana kept up the pressure on the Delhi bowlers before falling to consecutive deliveries to end the innings.

Delhi had made a change at the top of the order, replacing youngster Prithvi Shaw with the more experience Ajinkya Rahane. The switch did not pay off as Pat Cummins charged in and trapped Rahane lbw with the first ball of the innings.

It got worse for Delhi when Shikhar Dhawan, coming off the back of consecutive unbeaten centuries, had his off stump knocked out of the ground by Cummins two overs later.

Shreyas Iyer and Rishabh Pant sought to rebuild for the Capitals and put on 63 for the third wicket, however it took them a shade under 10 overs to do so and the required rate was climbing.

Pant’s efforts to address that led to his downfall, Chakravarthy striking with his second ball as the left-hander top-edged a googly out to deep backward square.

Shimron Hetmyer signalled his intentions by launching Narine for a huge six, only to hole out off Chakravarthy in the next over and when Iyer (47 from 38) picked out long on from the following delivery, the leg-spinner had three and the damage to Delhi was fatal.

Marcus Stoinis was next to go, the latest Delhi batsman to sky the ball trying to hit against the spin of Chakravarthy and be caught in the deep. Four balls later the spinner completed his five-wicket haul, a lovely googly that turned just enough to beat the bat of left-hander Axar Patel and clip the top of off.

That really was the end of the match as a contest but there was still time for the fast bowlers, Cummins and Lockie Ferguson, to return snare an extra wicket apiece before the end of the innings.

Watch every match of the 2020 IPL live on Sky Sports Cricket. Royal Challengers Bangalore vs Chennai Super Kings and Rajasthan Royals vs Mumbai Indians are Sunday’s matches with coverage beginning at 9.50am.