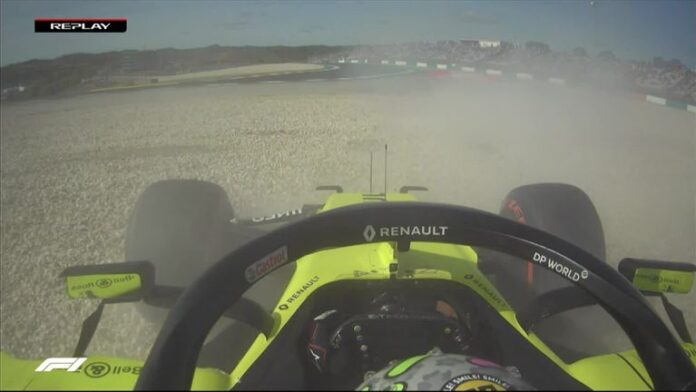 Watch Sunday’s Portuguese GP live only on Sky Sports F1 from 1.10pm on Sunday when Hamilton will bid to set a new record for the most wins in F1

Lewis Hamilton seized pole position from Valtteri Bottas with a brilliant final lap in a Portuguese GP qualifying session that went to the wire on F1’s debut at Portimao.

The championship leader had dropped to third behind Bottas and Red Bull’s Max Verstappen mid-way through his final lap but was going quicker than both of them and crossed the line one tenth clear of his Mercedes team-mate with a lap of 1:16.652.

“Every lap he’s been supreme, but when it matters most Lewis Hamilton has knitted it all together beautifully.”

Hamilton admitted: “I can’t tell you how hard that was today.”

Verstappen briefly held a front-row position but was shuffled back to a more familiar third, where he will again share the second row with Ferrari’s in-form Charles Leclerc.

Sergio Perez was a strong fifth for Racing Point ahead of Alex Albon, who has effectively been given two races by Red Bull to prove he deserves to keep his seat for 2021.

The start of qualifying was delayed by 30 minutes while officials worked to repair and check drain covers around the circuit after the one at Turn 14 had worked its way loose in the earlier final practice session.

Sebastian Vettel’s Ferrari had run over the cover and dislodged it.

Vettel went on to endure another fairly torrid qualifying with the four-time champion the slowest driver in Q2 after several small mistakes and starting 15th.