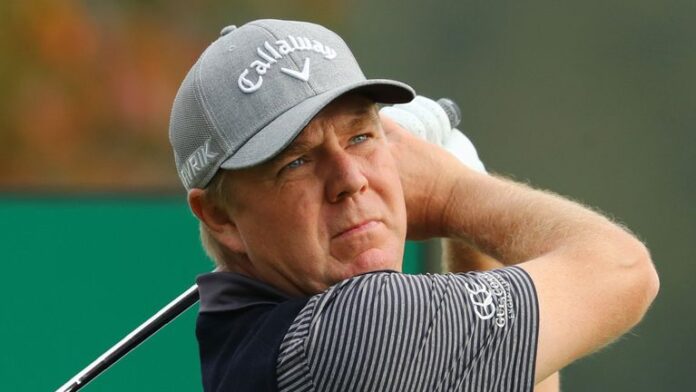 Watch the final round on Sky Sports Golf. Live coverage begins Sunday at 11am.

Ross McGowan and Laurie Canter both enjoyed a flurry of late birdies to pull clear of the field after the third round of the Italian Open.

McGowan birdied three of the last four holes to post a 67 and 19 under in the clubhouse, and overnight leader Laurie Canter regained a share of the lead after he finished with three consecutive birdies to cap a 69.

Eleven years after his previous 54-hole lead in a European Tour event, McGowan is now hoping to emulate his lone Tour victory – a three-shot triumph over Mikko Ilonen at the Madrid Masters.

The 38-year-old made a confident start in the damp and cool conditions at Chervo Golf Club near Lake Garda, making birdies at two of the first four holes and, although he also eagled the sixth, he sandwiched that between a pair of bogeys and dropped another shot at nine.

But he got back on the birdie trail at the 11th, and McGowan picked up further shots at 15, 16 and 18 to get to five under for the day, and Canter was the only player to match his clubhouse target.

“I’m pretty comfortable right now,” said McGowan, who has only one top-10 finish in the last four years on Tour. “I’m not exactly sure where the driver is going but around the greens and on the greens I’ve been very comfortable. Definitely my putting has been my best strength this week.

“A win would probably change the outlook for the rest of the year, next year and hopefully for the next few years after that. I’m not getting any younger so it would be quite handy to win one nice and early.”

Canter, who opened with a stunning 60 on Thursday, had to overcome an early piece of misfortune when his arrow-straight drive at the long fourth his overhead power cables, and his second effort veered left and into the water.

The mishap led to a bogey-six, but he repaired the damage at six and 11 only to err again at the 12th to drop back to 16 under, although he clawed his way back to the summit with his fantastic finish.

“I’m pretty happy with that score, because the first few holes I felt pretty out of sorts to be honest,” said Canter, who is looking for his maiden European Tour title. “I couldn’t get myself going and I was trying not to fight that too much and stay patient. Then obviously to finish like that is great and to finish in the 60s is a great effort after that day.”

On his misfortune on the fourth hole, Canter added: “It was a good first swing in the fourth hole and I was quite happy with it, I reckon I would have been on the fairway. I hit the second shot, the power line didn’t hit it for me, I just made a really bad swing and hooked it in the lake.

“So it’s difficult and I guess it’s just a feature of this course, you’ve got to contend with the odd power line. I was unfortunate there but you’re probably going to get your fair share of good and bad luck.”

Dean Burmester leads the chasing pack on 16 under after the South African finished birdie-birdie for a 68, while former European Ryder Cup star Nicolas Colsaerts and Germany’s Sebastian Heisele both fired 66s to end the day four shots off the lead.

Defending champion Bernd Wiesberger looked set to make a significant charge when he made four birdies in five holes early on, but the Austrian played the remainder of his round in level par to stay at 13 under, with Martin Kaymer also six strokes behind the leading pair going into the final day.