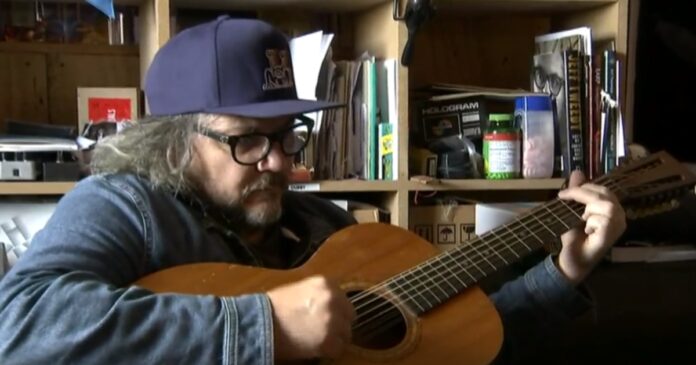 Like many of us, Jeff Tweedy, the celebrated frontman of the band “Wilco,” has spent much of the year hanging around the house. But quarantine hasn’t slowed down Tweedy’s prolific talent.

“You’ve been doing sessions at home during the pandemic almost every day,” “CBS This Morning’s” Anthony Mason said to Tweedy.

“Was that something you needed to do?” Mason asked.

“The initial impulse was to cheer my wife up,” Tweedy said. “I think she was disappointed that I was home from tour.”

Wilco’s summer tour was canceled and Tweedy has no idea when he’ll perform in front of a live audience again.

“We just started playing songs occasionally. We did it every night. We’ve done, like, 107 shows,” Tweedy said. “I just felt a need to have some routine. Some daily connection to my family and to share some sense of reliability and normalcy.”

“And then you went and recorded an album as well?” Mason asked.

“I was just given all this time, that I wouldn’t have otherwise had,” Tweedy said.

The new album, “Love is the King,” was released Friday. But that wasn’t the only writing Tweedy did. In June, soon after the death of George Floyd, Tweedy put out a statement on Twitter pledging 5% of his songwriting royalties to groups working for racial justice and challenged the industry to follow him. “The modern music industry,” he wrote, “is built almost entirely on Black art.”

“It’s still an uneven playing field,” Tweedy said. “And I don’t think a lotta people wanna believe that, maybe. But it is.”

In the seven months since the pandemic began, Tweedy has also written and published a new book.

“If you wanna write two songs, you have to buy two books,” Tweedy said.

It’s not just a guidebook for songwriters, it’s a meditation on Tweedy’s own creative process.

“What does creativity do for you?” Mason asked.

“It’s a good way to kill time without hurting anybody,” Tweedy said. “It teaches me about myself. It functions the same way I think mediation might function for a lot of people.”

“You’ve been incredibly productive,” Mason said. “Mentally, how do you feel you weathered the pandemic?”

“I have struggled with depression and anxiety disorder for almost my entire life,” Tweedy said. “So, I feel like — I feel pre-pandemic’d. I actually feel well-suited. There’s something about having to cope with those particular types of mental health issues that has prepared us for quarantine.”