Home Sport Niners and Patriots with points to prove 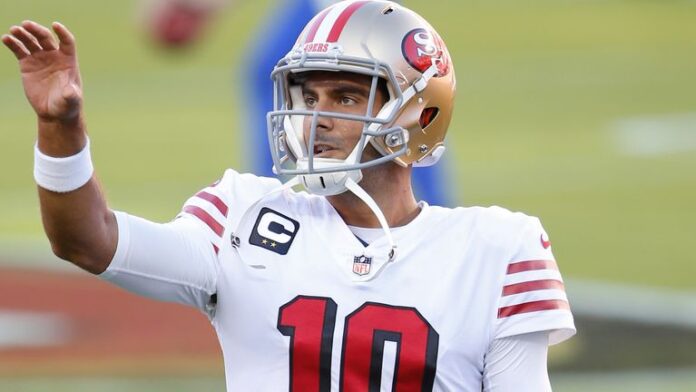 The San Francisco 49ers head to New England on Sunday in a matchup that would have been marked on many people’s calendars preseason.

Two of the greatest franchises in NFL history – one with a record-equalling six Super Bowl titles to their name, the other with five and having reached a seventh back in February.

But, both teams have somewhat stumbled out of the gates this season, with the Patriots losing two straight to slip back to 2-3 and San Francisco, at 3-3, seemingly still nursing a hangover from that 31-20 defeat to the Chiefs down in Miami earlier this year.

The 49ers are suffering from far more than a sore head, however. Their early-season slump can mostly be explained away by a raft of injuries to their roster, with 2019 defensive rookie of the year Nick Bosa (out for the season) the most notable absentee.

The likes of Solomon Thomas, Richard Sherman, Dee Ford, Raheem Mostert and Jimmy Garoppolo have all too missed time or, in some cases, continue to do so. Garoppolo is at least now back and, after a decidedly ropey return in a Week Five, 43-17 blowout loss to the Dolphins, he and the team were much-improved in beating the Rams 24-16 last Sunday night.

As for the Patriots, they too have had a rotten run of luck, though theirs is coronavirus-related, having to cope with multiple schedule changes and countless team practices lost over the last three weeks since quarterback Cam Newton tested positive.

Cam and the offence had just appeared to be clicking; there were wins over the Dolphins and the Raiders either side of a 35-30 defeat to the undefeated Seahawks, in which their new quarterback undoubtedly had his best game – 397 yards passing and a TD, plus two rushing scores – and very nearly won it at the death, only to be stopped just short at the goal line.

The disruption since has seen the Patriots drop games to the Chiefs and, more surprisingly, the Broncos to fall below .500 at this stage of the season for the first time since 2001.

And Cam is not in the mood for making excuses. “For us as an offence, we know that our excuse basket is running really low,” he told reporters this week.

“I just haven’t been good. I haven’t matched enough good plays together for my liking. I know what I’m capable of. My personal standard is extremely high and I haven’t been meeting it.”

The good news though for Pats fans: in 2001, following that 2-3 start, New England went on to lift the first of their six Vince Lombardy trophies.

Putting the past behind them

It’s easier said than done, but the Patriots can’t dwell on that 2001 turnaround, nor their subsequent two decades of success.

Since returning a 5-11 record in his first season as head coach in 2000, Belichick has never returned a losing record, while the Pats have only failed to make the playoffs twice in his tenure. The most recent of those absences came in 2008 when he didn’t have Tom Brady at quarterback.

With Brady injured early in the season, Belichick, remarkably, managed to get an 11-5 tune out of his backup QB Matt Cassell. Just as incredible, is the fact that record didn’t win them the division nor earn them a wild card place.

The only other instance of New England missing the playoffs under Belichick’s watch was when they were suffering from a hangover themselves back in 2002.

It’s a very real problem for the 49ers. Since the year 2000, nine losing Super Bowl finalists have failed to make the playoffs the following season, with seven returning losing records.

If the Niners want to avoid being another addition to that list, they must put it out of their mind and focus and what is immediately in front of them, the challenge of the Patriots this weekend.

And the matchup is a particularly notable one for one man especially, with it being Jimmy Garoppolo’s first game back at Foxborough since the former Brady back-up was traded to San Francisco in October of 2017.

So the story goes that, if Belichick had his way, Garoppolo would be walking out of the home team dressing room this Sunday.

The Patriots coach, it’s said, was keen to move on from Brady earlier than his eventual departure for Tampa Bay in this offseason. Belichick was reportedly ready to hand the reins over to Jimmy G, knowing he risked losing him otherwise, and begin his rebuild.

But team owner Robert Kraft ultimately pulled rank, kept Brady on side and they would return to the Super Bowl under the veteran signal-caller in consecutive years, winning a sixth ring.

Garoppolo, meanwhile, was shipped out to San Francisco and, though such silverware still eludes him, it has also proven to be a fruitful couple of years.

Jimmy G first won the fans over with a 5-0 finish to that 2017 to wipe out the memories of the ugly 1-10 record that preceded it and earn him a big-money deal. A torn ACL wrecked his and the team’s 2018, but everything clicked in 2019.

In his first full season as a starter, Garoppolo took the team all the way to the Super Bowl, throwing for 3978 and 27 TDs, though they ultimately came up short against Kansas City, with Garoppolo in particular coming in for some criticism for his fourth-quarter play as a they blew a 20-10 lead late.

Some question marks still remain over the 49ers QB after an iffy start to this season, but he’ll go some way to silencing the doubters if he beats the very man on the opposite sideline who was the first to believe in him.

“It will be cool to get back to the old stomping ground and see some familiar faces,” said Garoppolo ahead of his homecoming.

Speaking of Belichick, this game is also a real meeting of the minds in the coaching department, as the wise, old defensive guru going up against arguably the league’s leading offensive mind in Kyle Shanahan.

Pro Football Talk‘s Chris Simms is exciting to see the two head coaches go to-to-toe for the first time, saying: “We know the Shanahan run scheme, it’s as creative as it gets in football, and Belichick has his great secondary but not a lot of run-stoppers.”

The Patriots have allowed 22 points per game so far this season which, if they continue at the same pace, would represent the most in the Belichick era.

“What is he going to do to slow down this 49ers offence?,” Simms added. “The Patriots are reeling a little bit, while it seems like the 49ers are getting healthy and righting the ship a little bit.

“I can’t wait to see the chess match between those two guys. It’s one with a lot of meaning.”

This game does indeed have a lot of meaning place upon it, even this early in the season.

For whichever team loses, it will be their fourth setback of the season, allowing for very little margin for error the rest of the it. A 10-6 record will likely be good enough for the playoffs, especially with a No 7 seed added to each conference from this season onwards, but 9-7 perhaps not.

The 49ers’ schedule, in particular, is heading into a particularly brutal stretch, with the following five weeks reading @ Seahawks, vs Packers, @ Saints, @ Rams, vs Bills – all of whom are very much in the playoff mix.

Their task is made all the tougher by the strength of the NFC West this season, the only division in the NFL in which no team is below .500.

As for the Patriots, Belichick knows better than to panic at this stage of the season, and New England have foolishly been written off before, but the AFC East is also stronger this year and a third-straight defeat would hardly be the ideal preparation for a Week Eight showdown with current leaders Buffalo, who could well have a three-game lead going into the meeting on their home turf.

Also possibly muddying the waters this season are the upstart Dolphins, now led by rookie quarterback Tua Tagovailoa, though it remains to be seen if he can galvanise the 3-3 team into playoff contention.

“The silver lining for Patriots fans is they still can figure this out and get it together,” Pro Football Talk‘s Mike Florio said this week.

“Hang around .500 till Thanksgiving and then let Belichick do his thing in December – get guys off of the COVID-19 list by then – I’m still not ready to give up yet on the Patriots.

The 49ers and Patriots’ seasons certainly won’t be decided on Sunday night, but the result will go a long way to determining whether they’re contenders or pretenders in 2020.