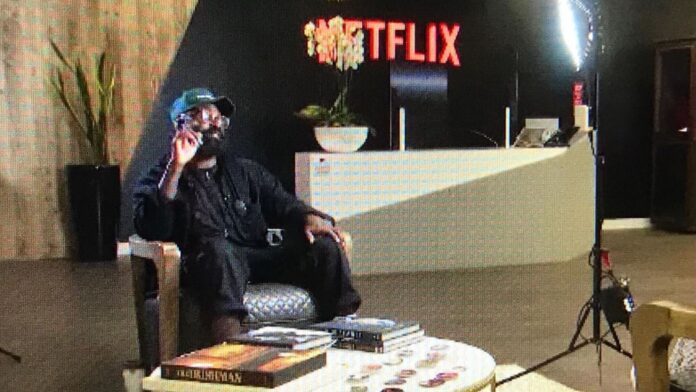 Netflix is celebrating Black History Month by putting together a collection of TV programmes and films to acknowledge the Black British experience.

Filmmaker Adeyemi Michael, who curated the special selection of shows, says he wants to “speak to the Black British narrative” and recognise “the plethora of narratives which exist”.

He told Sky News: “We’re barely being allowed to tell our own stories verses people who are telling their own stories as well as others.”

Michael says part of the challenge is to find new voices – both on and off-screen – in order to “balance out” the film industry.

He told Sky News it’s vital to showcase a range of stories on screen and for that to happen there needs to be a range of storytellers and commissioners. He said currently that isn’t happening.

His short film, Entitled, is part of the collection which also includes the classic 1980s TV sitcom Desmond’s set in a barber shop in Peckham, south London, and the new thriller His House, which follows a family’s escape from war-torn South Sudan into even worse horrors in the UK.

Michael says for him, the most important thing is for people is “to feel seen” when they are watching TV and film.

In curating the collection – which is titled Black British Stories – Michael says he wanted to “focus on stories that depicted joy and not just trauma” because “those are the stories often being shown”.

Rocks is one of the chosen films, a celebration of sisterhood, but Michael says it is also a depiction of what it means to be a black British girl.

The critically acclaimed movie directed by Sarah Gavron tells the story of a teenage girl abandoned by her mother who finds solace and support through her group of girlfriends.

It is the first film that writer Theresa Ikoko has been involved in and she says she hadn’t realised how one dimensional the film industry was until she joined it.

Ikoko told Sky News: “I hadn’t realised why I hadn’t seen more stories by people from more variations of backgrounds, from different communities and reflecting different sides of what it means to be British.”

She said it was only when she became part of the “story-making machine” that she started to question why those stories weren’t there and challenged that fact.

“People constantly have problems questioning the viability of these stories, when I know as an audience member the thirst and the hunger we have for them.”

However, Ikoko says she “didn’t make work to represent people” she made work “to love people”.

In a moving admission she said she started crying while watching Black Panther.

As a lifelong Marvel fan, Ikoko said she only realised while watching the superhero movie, with a largely black cast, that was the first time she “felt loved” by the franchise.

“I realised it had been a very unhealthy relationship and very one-sided, so I hope that for Rocks – I hope that people feel loved.”

Black British Stories is streaming on Netflix across October.

Sky is also celebrating Black History Month with an expansive range of programming to celebrate black talent, culture and history, as well as educate and engage in the ongoing fight for racial equality.