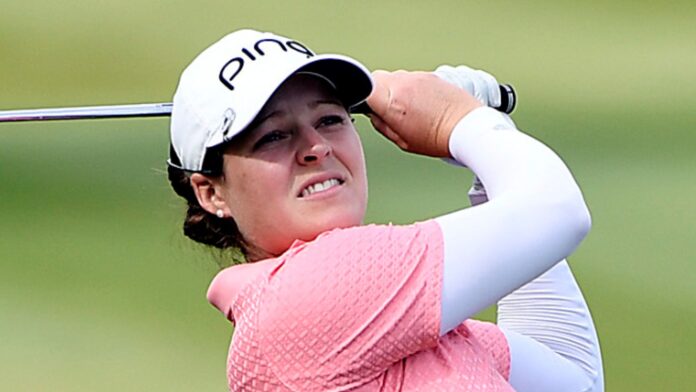 Ally McDonald stayed on course to celebrate her birthday with a victory as she retained the lead at the LPGA Drive On Championship.

McDonald, who turns 28 on Sunday, recovered from an opening bogey to open up a four-shot lead with four birdies in five holes around the turn, an advantage she maintained with just two holes of her third round to play.

However, the Solheim Cup star bogeyed the 17th and playing partner Bianca Pagdanganan finished birdie, birdie to reduce the deficit to just a single stroke heading into the final round at Reynold Lake Oconee.

“I played some really solid golf after I kind of settled in,” said McDonald after signing for a 69 which consolidated her challenge for a maiden victory on the LPGA Tour, earning her the 54-hole lead on 13 under par.

“I made a few bad swings towards the end of the round, but I’m not going to discredit how I really did settle in and played solid golf for most of my holes.

“So I’m excited with the position I’m in. Mentally I think I handled myself really well. Ready to take on tomorrow.”

LPGA Tour rookie Pagdanganan, playing in only her sixth event of the year, was also one over for the day early on before getting under the card with birdies at the seventh and ninth, and her impressive finish matched McDonald’s three-under 69.

“I was giving myself really, really good opportunities, so eventually the putts are going to have to drop,” said Pagdanganan, who is bidding to become only the second player from the Philippines to win on the LPGA Tour after Jennifer Rosales.

Danielle Kang, a two-time winner on Tour this season, pulled to within two of the lead when she birdied the 13th and 15th, but she carved her drive at 16 into a local resident’s back garden, beyond the out-of-bounds markers, and ran up a double-bogey six.

The world No 5 did get one back at the last to post a 70 and close on 11 under, while Spain’s Carlota Ciganda returned a five-birdie 68 to move into fourth, just three shots off the pace.

But Mel Reid will be seven strokes behind overnight after covering the first 12 holes in five over. although the spirited English star did stage a late rally with birdies at 13 and 14 and an eagle at the last.