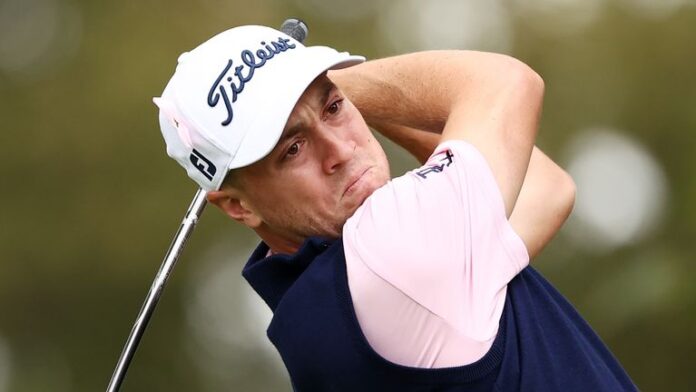 Justin Thomas retained his lead at the Zozo Championship as Jon Rahm surged into contention on day three at Sherwood Country Club.

Rahm built on a hot start and fired a nine-under 63 to march 20 places up the leaderboard, claiming the clubhouse lead on 18 under before Thomas birdied 16 and 17 to edge back in front after 54 holes.

Only four shots separate the top 12 players heading into the final round, with Matt Fitzpatrick among a large group of players on 15 under and within striking distance of the lead, but star draws Rory McIlroy and Tiger Woods will be playing for pride and Masters momentum in Sunday.

Thomas slept on a one-shot lead at the halfway stage and he enjoyed the ideal start to his third round as he birdied the opening two holes before picking up another shot at the seventh, although he blocked his tee shot way right at the par-three eighth and could not avoid a bogey.

Rahm, meanwhile, made the most significant early move through the field following a birdie, eagle start, and the Spaniard added further birdies at the fourth, fifth and seventh to race to the turn in only 30 blows.

Further gains at 10 and 13 kept him in the hunt, and he rolled in a 15-footer for his seventh birdie of the day at the short 17th before scrambling a par at the last to cap his best round on the PGA Tour since shooting 61 on day three of the WGC-Mexico Championship in February.

Rahm, who could dethrone Dustin Johnson as world No 1 with a win or solo second in California, was looking good for at least a share of the lead as Thomas and Lanto Griffin remained one behind with three to play late in the evening.

But Thomas holed a good putt for birdie at 16 and rattled in a 30-footer for a two at 17 to regain the outright lead, and he narrowly missed out on finishing with three birdies in a row as he settled for a 67, while Griffin bogeyed two of the last four holes to slip to 17 under.

Fitzpatrick maintained his push for a maiden PGA Tour victory with a seven-birdie 67, although he did suffer a late setback with his second bogey of the round at the last dropping him to 15 under alongside the likes of two-time Masters champion Bubba Watson (68) and former US Open winner Webb Simpson (67).

Tony Finau put himself in the mix to end his long wait for a second Tour win as he raced to seven under for the day, and 18 under for the tournament, with five holes to play.

But the big-hitting American came to grief at the 14th and needed six shots just to get his ball onto the putting surface, the resulting triple-bogey seven followed by an ugly six at 16 as he plummeted back out of the top 10 and ended the day five behind Thomas.

Justin Rose needed last birdies at 16 and 17 to salvage a level-par round of 72 which left him nine off the pace, with McIlroy one further adrift after a 67 which ended on a sour note at the ninth – a double-bogey six including a duffed chip before missing a four-foot putt for bogey.

Woods was unable to repeat his form of his second-round 66, missing a number of shots to the left in a disappointing 71 which saw him close on three under alongside Phil Mickelson, who was on “59 watch” after seven birdies in his first eight holes before he laboured home in 67.