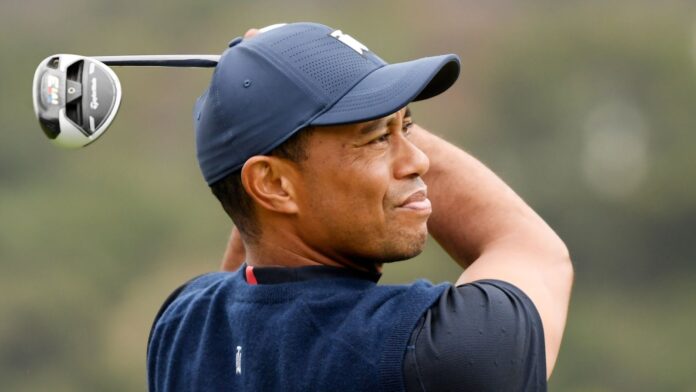 Tiger Woods was frustrated at missing out on a “gettable” Sherwood golf course after his hopes of retaining the Zozo Championship title ended with a third-round 71.

Woods needed a score similar to his 66 on Friday to have any hope of becoming the first player in history to win 83 PGA Tour titles, but he struggled with directional issues on day three and a 71 left him 16 shots off the 54-hole lead.

Mixing three birdies with two bogeys was not Woods had in mind at the start of the third day, and he will use the final round to build some positives ahead of his defence of the Masters next month.

Well, it wasn’t very good,” was Woods’ blunt assessment of his round. “I hit a lot of balls left today and made the round a lot harder than it should have been.

“The golf course is playing a little bit harder, but jeez, it’s still gettable. Obviously there’s a lot of low rounds and I wasn’t one of them.

“I felt like I had a good warm-up session and just didn’t quite hit it as good as I did in my warm-up. I put the ball in some bad spots. But the golf course was gettable and I just didn’t do it.

“As I said, I missed a few balls left and I need to get that fixed for tomorrow and clean that up. I was hitting it solid, that’s the thing. I flushed all the shots, they were just starting left.

“Hopefully, tomorrow it will be better and I can shoot a low round and take some positives out of this week. Obviously I’m not even close to even getting in the top 10, but if I can just play well shot for shot and build on what I had yesterday?

“If I can do something similar to what I did on Friday, I’ll have a lot of positives. As I said, I flushed it today, the ball was just starting left.”

Rory McIlroy also looks to be too far back to challenge for silverware on Sunday despite firing back-to-back 67s, representing a spirited comeback following an opening 73.

McIlroy started at the 10th and made excellent early progress with five birdies in six holes from the 12th, including a 42-foot putt for a birdie-two at the 15th having missed from four feet on the previous green.

The world No 5 birdied both par-fives on the front nine to get to 11 under for the tournament, but he made a mess of his final hole as he duffed a chip and missed another short putt for bogey to close with a double-bogey six.