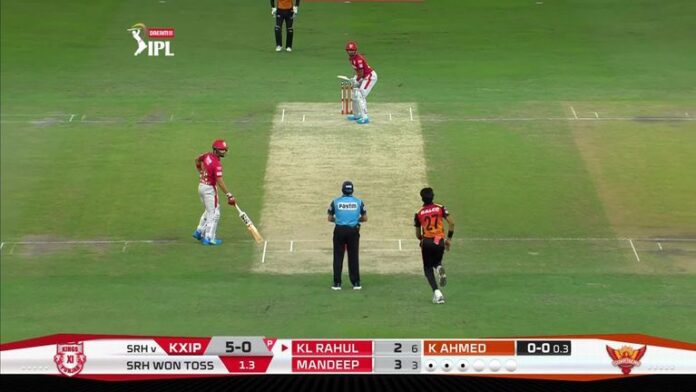 Chris Jordan made a dramatic return to Kings XI Punjab colours, inspiring a remarkable fightback as they clinched a crucial 12-run victory over Sunrisers Hyderabad to boost their IPL play-off hopes.

Jordan – who had been left out of Kings XI’s previous fixture – finished with 3-17 and took two catches as Sunrisers, chasing a modest target of 127 to win, collapsed from 56-0 to 114 all out.

The turnaround meant Kings XI – who lost six of their first seven IPL games – have now won four in a row, leapfrogging Sunrisers to go fifth in the table and maintain their chances of a play-off place.

Put in to bat in Dubai, Kings XI made a sedate start, with Sandeep Sharma (2-29) sending down two accurate overs and collecting his 100th IPL wicket when Mandeep Singh (17) skied a leg-cutter to the tumbling Rashid Khan in the deep.

Placement rather than brute force appeared to be Chris Gayle’s approach as he picked off Jason Holder with two sweetly-timed boundaries and then drove Rashid for six to reach 20 at a run a ball.

But Holder (2-27) had the final word in the tussle with his West Indies team-mate, tempting Gayle with a widish full-length delivery that he punched directly into the hands of Warner on the boundary.

That became a double blow for Kings XI next ball as KL Rahul (27) was bowled, failing to pick Rashid’s googly – and the innings never really recovered as they stumbled to 126-7.

Rashid finished with 2-14 from his four overs, with Jonny Bairstow’s neat glovework securing the leg-spinner his second victim as Deepak Hooda was left stranded without a run to his name.

A full 70 deliveries passed without Kings XI registering a boundary and, even though Nicholas Pooran remained at the crease, top-scoring with 32 from 28 balls, the total of 126-7 looked unlikely to be enough.

Sunrisers skipper David Warner signalled his intent immediately at the beginning of the chase, carving Mohammed Shami over cover for six in the first over and then repeating the maximum with a ruthless pull off Arshdeep Singh.

Warner (35) slammed another two boundaries off Shami before reverse-sweeping Ravi Bishnoi’s first delivery for four – but he attempted to give the next one the same treatment and gloved it behind, with Kings XI reviewing the not-out decision.

Although Bishnoi (1-13) was unsuccessful with a second review for lbw against Bairstow later in the over, the Englishman departed soon afterwards, bowled around his legs for 19 by Murugan Ashwin (1-27).

Sunrisers’ scoring rate dried up immediately – and doubts started to creep in once Jordan leapt at mid-off to pouch Abdul Samad’s leading edge and reduce them to 67-3.

Manish Pandey (15) and Ravi Shankar (26) appeared to have put their side back on track, only for Jordan to have Pandey caught at long-off before removing Holder (5) and Rashid (0) in successive deliveries.

The England seamer conceded just three off the penultimate over to leave Sunrisers still needing 14 – and that proved too many as Arshdeep (3-23) wrapped up his side’s astonishing recovery.