Home World The newspaper that gave Black Britain a megaphone 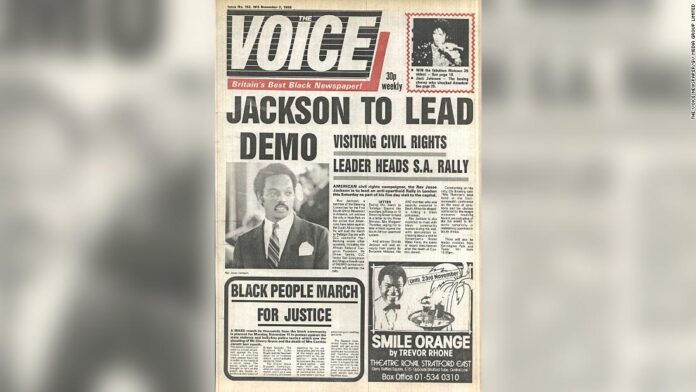 The Brixton riots, as they became known, were primarily depicted as a challenge to the rule of law. The press emphasized criminal elements, characterizing young, Black male protesters as “troublemakers” during those disturbances, according to studies cited in a subsequent analysis of how the UK media covered riots in 2011.
News reports at the time failed to account for the issues that were at the heart of the riots in 1981, including unemployment, racism and oppressive policing, in particular the extensive use of stop and search. That media bias was spotted by Val McCalla, who had arrived in England aged 15 some two decades earlier.
Jamaican-born McCalla was working at local London paper East End News when the Brixton clashes happened. He saw the need for a newspaper that would address the issues that mattered to British-born African-Caribbean people who were trying to stake their claim to the only country they had ever known.
With the help of a £62,000 ($81,000) loan from Barclays, McCalla launched The Voice in August 1982 at the Notting Hill Carnival, Europe’s biggest street party and a proud celebration of African-Caribbean culture. From an office in Hackney, east London, McCalla and then editor Flip Fraser led a team of young journalists covering hard news, investigations and human interest stories interspersed with sports, fashion and entertainment. The offices would later move to Brixton.
“It was very exciting,” said Yvonne Thompson, who co-founded Black music radio station, Choice FM (now Capital Xtra) in 1990. The Voice was “the place to look if you wanted to find out what was actually going on in the Black community,” Thompson, who ran her own public relations firm for nearly three decades, told CNN Business.
Existing Black newspapers, such as The Caribbean Times, the West Indian Gazette and The Jamaica Gleaner, catered to mostly older immigrants who wanted to follow news from the Caribbean. The Voice, a weekly, tapped into a generation figuring out what it meant to be Black and British.
While it may not hold the same sway it once did among Britain’s increasingly diverse Black community, its contribution to UK media is incontrovertible and its mission just as important today as it was 40 years ago.
A report by the Reuters Institute for the Study of Journalism in 2016 found that just 6% of journalists in UK newsrooms are non-White, compared with about 13% of the general population. Earlier this year, the Institute published research showing that none of Britain’s top 10 print, digital or broadcast outlets have a Black editor in chief.
And a recent study by Women in Journalism, a campaigning organization, found that during one week in July not a single story by a Black reporter appeared on the front pages of the 11 most widely read UK newspapers.
The lack of diversity in UK newsrooms underscores how vital The Voice’s pioneering work has been, even if too little has changed elsewhere in the media since its inception.

“Without doubt it blazed a trail,” said Joseph Harker, deputy opinion editor at The Guardian. The Voice “spoke to that much younger, more energetic, angrier section of the population. It was the first Black newspaper aimed at Black British people,” he added.
Harker joined the paper in 1987 straight out of university and spent four years there, first as a reporter and later as news and assistant editor. He was used to reading negative stories about Black people relating to crime, poverty and unemployment. Working at The Voice, where Black excellence was celebrated and where he was surrounded by Black ambition and success, had a profound impact on him.
“It completely transformed my sense of what being Black means,” Harker told CNN Business. The mainstream media had no interest in Black people “apart from crime stories and riots,” he added. “If it was anything positive about Black people it just wouldn’t be covered.”
From its founding, The Voice’s vision was that “Britain’s fast-growing black community should have a voice amid all the social unrest erupting during the 1970s and early 1980s,” the paper’s acting managing director George Ruddock wrote in an October 2019 editorial, announcing its move from weekly to monthly publication.
Its first issue (pictured above) led with a story about a Pakistani family in east London that was being targeted by a racist gang, marking what Ruddock considered to be “the beginning of the publication’s long-standing reputation for campaigning on the many issues which affect the welfare of black Britain.”
Nearly four decades later, The Voice continues to “campaign, celebrate and educate,” according to Paulette Simpson, executive director of The Voice Media Group. The newspaper changed hands in 2004, two years after McCalla died, and is now part of GV Media Group Limited.
The Windrush scandal, which erupted in 2017, remains one of its “big campaigning issues,” added Simpson. Windrush refers to the name of the ship that brought a generation of Caribbean immigrants to Britain in the late 1940s to help rebuild the country following World War II.
Subsequent changes to immigration laws wrongfully deprived many of them and their descendants of their rights to British citizenship. In some cases, they were deported. The UK government announced a compensation program for victims in 2018.

The Voice continues to report on developments relating to Windrush and issues such as discriminatory policing, upholding a proud legacy of confronting injustice. The paper was writing about racism in the police years before an inquiry into the failed investigation of the murder of Stephen Lawrence concluded that “pernicious and persistent institutional racism” played a role.
Lawrence, a Black teen, was killed by a White gang while waiting for a bus on April 22, 1993. More than two decades after the inquiry into his killing, The Voice continues to cover the topic, leading its July issue with a story on systemic racism in policing, which is the subject of a probe by the Independent Office for Police Conduct.
“They report on the stories that no one else wants to tell… when it isn’t trendy or in the spotlight,” said Tobi Oredein, the founder of Black Ballad, a digital lifestyle publication.
Oredein launched the publication while freelancing in 2014, after being repeatedly overlooked for roles at magazines that she said all went to White women.
Like McCalla three decades before her, Oredein was frustrated with the lack of media coverage of Black Britain. Beyond The Voice and hair magazines, there were no publications for Black women interested in their careers, finances and health, she told CNN Business.
At its peak of popularity, The Voice sold more than 50,000 copies a week, including in cities outside London such as Manchester, Birmingham and Bristol, where it still has loyal subscribers.
After 37 years as a weekly title, it decided to go monthly in September last year and revamped its website, which it said attracts more than 350,000 unique visitors and over 500,000 page impressions a month. A digital version of the newspaper reaches readers across the United Kingdom, as well as in Africa and the United States.
The Voice also produces standalone publications, including an annual African & Caribbean Food and Restaurant Guide and a UK Black Business Guide.
“I think sadly it’s not as relevant now as it was in its heyday, in the early and mid 90s,” said Harker of The Guardian. This is partly to do with the changing makeup of Britain’s Black population, with more immigrants from east and west Africa, and more racial integration than before, he added.
Still, many of the stories The Voice covers won’t be found elsewhere, which makes it a treasure trove of Black British history and brings a unique flavor to its content today.
For example, the September issue features a piece on the growing popularity of homeschooling among Black families and in August it explored the contribution that Black businesses make to the UK economy. As part of its celebration of Black History Month, the newspaper has profiled Gillian Joseph and Charlene White, anchors at Sky News and ITV News respectively.
The Voice has itself launched the careers of several prominent journalists, including Martin Bashir, well known for his interviews with Princess Diana and Michael Jackson and now BBC religion editor; The Times Weekend editor Lesley Thomas; Guardian columnist Afua Hirsch; and writer and broadcaster Trevor Phillips.
The newspaper has also paved the way for other Black titles, such as Pride Magazine and, more recently, Black Ballad and gal-dem, which are garnering a growing following among young Black women who don’t see themselves represented in the pages of mainstream lifestyle publications.
The Voice “put Black journalism on the map,” said Harker. Its influence in UK media “will long outlast the publication itself.”