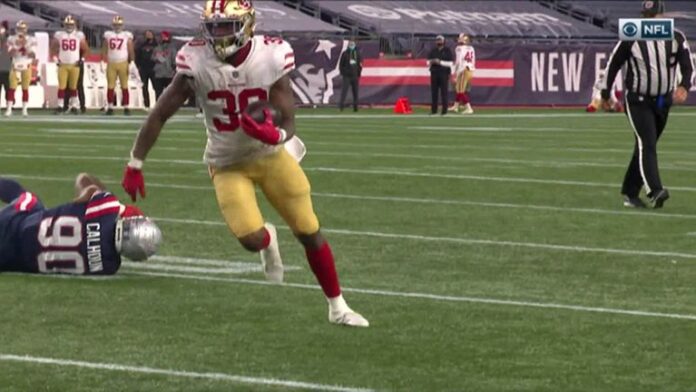 Jeff Wilson rushed for three touchdowns before suffering an ankle injury in the second half as the San Francisco 49ers steamrolled the New England Patriots 33-6 in a one-sided clash in Foxborough.

​​​​​​The 49ers (4-3) defence was just as dominant as their run game, with Patriots quarterback Cam Newton throwing three interceptions before being benched for Jarrett Stidham, who was also picked off once.

As for San Francisco QB Jimmy Garoppolo, in his first game back in New England since his 2017 trade to the 49ers, he threw for 277 yards, managing an offence that put up 467 yards against a traditionally strong Pats defence.

Starting in place of injured Raheem Mostert, Wilson set the tone early with a three-yard touchdown run in the first quarter.

He would follow that up with a 16-yarder in the final minute of the first half and a seven-yarder in the third period, the latter giving San Francisco a 30-6 lead, but also ending his day as he was injured on the play.

Kyle Juszczyk also scored on a four-yard run as the Patriots simply had no answer to the 49ers’ run game. Wilson finished with a game-high 112 yards on 17 carries as San Fran outrushed New England 197-94.

Jamar Taylor came down with two interceptions for the 49ers defence, while Emmanuel Moseley and Fred Warner had one apiece; Newton was limited to 9 of 15 passing, for 98 yards.

Jarrett Stidham replaced Newton to start the fourth quarter and went 6-for-10 for 64 yards. Nick Folk did all the New England scoring, with two field goals on a day to forget for the hosts.

The loss was the third straight for the Patriots, who haven’t scored more than 12 points in any of those three defeats.