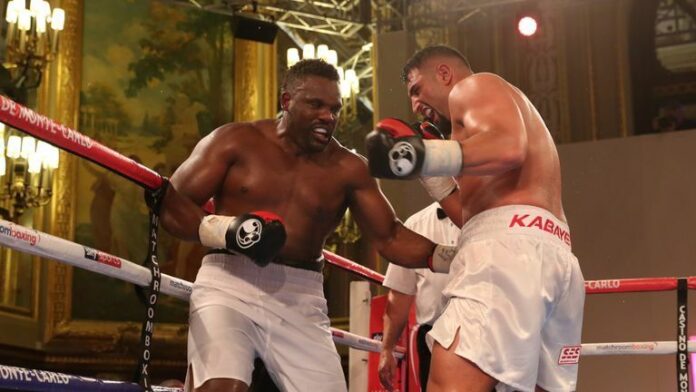 Derek Chisora must have realised that fate was against him when, hours out from his most disastrous fight, he almost drowned the last-minute replacement for his trainer who was stuck in another country.

The night that almost ruined Chisora was vintage ‘Del Boy’ – a chaotic build-up, a slippery mover with the secret to his demise and an alarmingly overweight Tyson Fury at ringside who looked so poorly-prepared that promoter Eddie Hearn thought “you ain’t ever going to come back”.

The depths of despair three years ago in Monaco illustrates just how far heavyweight cult hero Chisora has come – where there was anarchy there is now peace and, reinvigorated and newly-dangerous, he fights Oleksandr Usyk on Saturday night, live on Sky Sports Box Office, with his final chance to challenge for a world title at stake.

A European title fight against an unbeaten but untested German called Agit Kabayel. Win that belt and Chisora, then ranked in the WBC’s top 10, would edge closer to Deontay Wilder’s championship.

As it turned out, everything.

Fury had not fought in 23 months since ending Wladimir Klitschko’s IBF, WBA and WBO title reign and, beset with mental health problems, had ballooned up to 28 stone.

“I’m fat as a pig, hairy as an animal, but still hungry as a lion,” Fury declared upon arrival on the French Riviera. “Two years out of the ring gives me the va va voom to bust a few heads.”

Fury mocked Anthony Joshua: “I can’t bench press 100 kilos but I do have the sweet science in my brain.”

Fury had no promoter, no championships and no hope – Hearn sat down to talk business with him but questioned whether he could ever return, and now regards this as his biggest professional regret.

“He surprised everybody and how wrong I was,” Hearn later admitted.

The furore over Fury’s appearance had detracted from a major issue which would become the catalyst for Chisora’s worst night.

His long-term trainer, Don Charles, who led him through two fights with Fury, a world heavyweight title challenge against Vitali Klitschko and a brawl with David Haye, was stuck in the UK due to visa issues.

He would not be in the corner for Chisora’s fight.

“I find out that Don Charles isn’t coming. I said to Chisora: ‘Are you for real, pal?'”

CJ Hussein had been in Chisora’s corner before, assisting Charles with Vaseline, ice and water. On this occasion he travelled tasked with wrapping Chisora’s hands. At the 11th hour, he inherited an unwanted responsibility.

“But Derek said the night before the fight: ‘I want you in my corner’.

“I could see Derek’s mood wasn’t right because he had been let down by Don.

“I kept Derek away from everyone. I know him. He wasn’t himself.”

Charles told Sky Sports: “Fighters are temperamental people, and Derek is like that. If everything is not in order, it throws them off.”

The discipline to Chisora’s week was out of the window. Without Charles to monitor him, and with Fury’s arrival geeing him up, Chisora was free to enjoy the entertainment on offer in Monte Carlo.

“Derek was doing what Derek wanted to do,” Hussein sighed, tellingly.

They went to a gym frequented by Carlos Takam, who a rejuvenated Chisora would knock out a year later, but on this occasion he flatly failed to complete a hand-eye co-ordination test and Hussein immediately knew “something was wrong”.

After the weigh-in Chisora insisted his entire team jump into the Mediterranean – it nearly had dire consequences.

“We jumped into the water off a pier,” Hussein explains. “It was to revitalise Derek with the cold water.

“But the current was quite strong – Derek was okay because he is a big, strong man. But I nearly floated away! That is true.”

Good job you didn’t float away, Sky Sports mention to Hussein, otherwise who would have cornered Chisora then?

“It was a brilliant camp,” Charles insists about Chisora’s preparation.

“But I wasn’t there so the familiar voice wasn’t there. Complacency is a disease. Derek took the fight for granted because Kabayel wasn’t in his league.”

Hussein was panicked by Chisora’s outlook before a punch was thrown: “My instructions in the corner were: ‘Start this fight how you finished the last fight with Dillian Whyte. This kid is petrified of you. Forget about your jab, just walk through him and this fight will be over in two rounds. Stick it on him, please Derek’.”

But what followed was the oddest performance of Chisora’s career, a lacklustre and uninterested display with no cutting edge.

“In the corner Derek wasn’t hurt but he wasn’t responsive to me,” Hussein said.

“Derek just plodded through it. His body language wasn’t right. Derek knows he could have won it. But he didn’t want it enough.”

Charles, watching on TV at home, remembers: “I was fuming. Derek is a man who had been in the ring with the great Vitali Klitschko. Kabayel is not in that league.

“If he ran, then cut off the ring and put punches on him. But Derek just followed him. That is an elementary mistake. I expected him to take charge.”

Kabayel won a majority decision and Hussein still isn’t happy about it, saying: “Derek gifted that kid the European title.”

It was a third loss in five fights for Chisora (he was also beaten by Whyte and Kubrat Pulev). Aged 33, the future looked bleak after a career-worst performance.

“I’m not going to complain, I lost the fight,” Chisora, told Sky Sports immediately after. “I always bounce back so I’m not worried.”

Nobody believed him at the time but how prophetic those words were.

There is genuine contrition from Charles, who is no longer in Chisora’s corner.

“I am terribly disappointed,” he said. “As his coach, I should have been there. It was my responsibility.

“I was fuming at myself for not being there. I blame myself. Derek should have taken charge and he didn’t and, before he knew it, the fight slipped away. It was a horrible fight where Kabayel ran, ran, ran, ran.

“But I blame myself for not being there. It was a terrible, devastating experience for all concerned.

“Kabayel was celebrating like he had won a world title. There was no way he should have beaten Chisora.”

Kabayel told Sky Sports: “We had a plan with my trainer, Sükrü Aksu, and it worked 100 percent.

“For me it was a very important fight. It was my first defence of the European title. Chisora was a ‘big name’, the most famous boxer in my career up until then.

“In addition, the whole thing in Monaco with a select audience. Everyone saw me as an outsider despite the European championship.”

Kabayel’s explanation for how to defeat Chisora is ominous considering the Brit’s upcoming foe is the much more decorated and experienced Usyk.

But the Chisora that will step into the ring with Usyk is incomparable to the Chisora who was nearly ruined in Monaco three years ago.

It is worth noting that his upward momentum began with Charles retained as his trainer, when Chisora withstood an early shellacking to emphatically KO Takam.

Their relationship ended there. David Haye, a former opponent of Chisora’s who broke Charles’ jaw during the infamous Munich punch-up, became his old rival’s manager.

“I can’t believe that, after everything Haye has achieved, he does the job for Chisora which is a cross between promoter, manager, motivational speaker, fitness guru and bag carrier! He’s like Chisora’s PA!

“Derek is someone you need to tell every morning: ‘Come on, let’s go!’

“If you don’t, is his desire still there?”

Kabayel is not surprised to see his former rival’s change in fortune.

“Why not? He was the tough and strong opponent that we expected,” Kabayel said. “And, later he showed what he was made of!

“Usually Usyk is the favourite, but Derek is difficult to beat due to his experience and irrepressible will to fight. In addition: Usyk has to arrive as a cruiserweight first in the heavyweight division. Not many succeed!”

The results have changed – Chisora enters his fight with Usyk with two brutal stoppages of Artur Szpilka and David Price behind him.

Chisora is a changed man outside of the ring, becoming a born-again Christian.

“I needed a bit of faith in my life, bro,” he told Sky Sports. “It has given me guidance, life-wise. It has helped my boxing and helped my life.”

Hussein gratefully knows he won’t get an unexpected call at any time this week. He sighs: “A lot of good came out of that fight, in the end. Maybe that’s why Derek is where he’s at today. There was a silver lining.

“I know Derek has stopped drinking because, at a couple of the clubs he goes to, I’m told that he just has an orange juice, says hello, then goes home.”

‘Del Boy’ is now ‘War’, fun has turned to focus and old enemies became crucial allies. Those decadent days in Monte Carlo could have been the end of Chisora. Instead, they represent a new beginning.