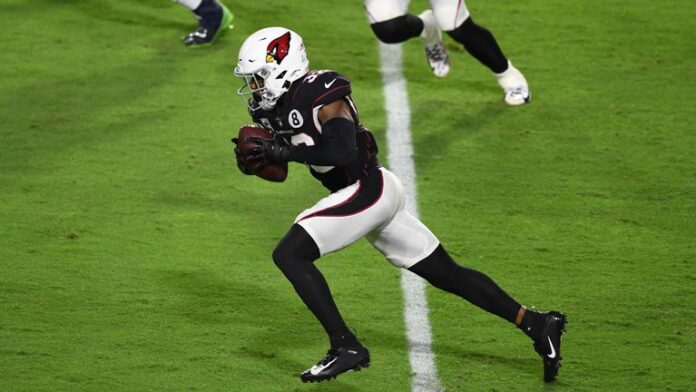 “Everybody that was watching that play, whether you like football or not, you can see that was something extraordinary,” said Seahawks head coach Pete Carroll

After seeing quarterback Russell Wilson intercepted by Budda Baker at the Cardinals’ two-yard line in the second quarter, the second-year wideout proceeded to chase down the safety before making a tackle at Seattle’s own eight-yard line to prevent the pick six.

The Seahawks defense were then on hand to reward his persistence and incredible speed by forcing a turnover on downs on the ensuing drive.

“It was one of the most remarkable plays I’ve ever seen,” said Wilson. “He just kept going, man. It was just unbelievable play by him, just the effort. I really respect him for that. That’s what it takes, just a winning effort.

It proved a quiet day as a weapon in the open field for Metcalf, who made just two catches for 23 yards in the 37-34 defeat.

The 22-year-old thought he had won it in overtime when he hauled in a 48-yard pass, only for the touchdown to be scratched off due to a holding penalty on David Moore.

Wilson was intercepted by hybrid linebacker Isaiah Simmons on the next play before Zane Gonzalez kicked a 48-yard field goal for the win.

On Metcalf’s tackle, Seahawks head coach Peter Carroll added: “You saw him realise what was happening, the opportunity, and he just used all that marvellous skill that he had and will to go run the guy down. And it was such an incredible play because of what happened afterwards.

“The defense followed and rallied, got out of there on four downs and took the ball off them, the offense goes (97) yards with the drive and scores. I just think that it was an inspiring play, nobody could miss it.

“Everybody that was watching that play, whether you like football or not, you can see that was something extraordinary.

“I’ve just never seen one quite like that, and the follow up, because of the inspirational moment was extraordinarily well done, so really a great play for all time.”

“Until that huge stallion of a human came galloping out of nowhere,” Kingsbury continued. “Phenomenal anticipation by [Baker]. DK Metcalf is an absolutely freak athlete, and what an effort play by him. High school coaches will be showing that one for years. Just don’t give up on a play.”