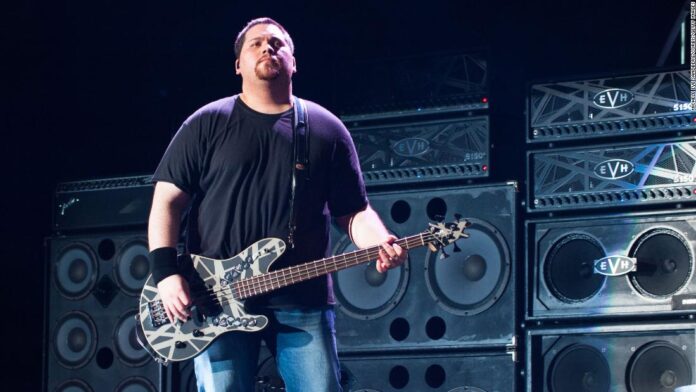 Wolfgang Van Halen took to Twitter to shut down speculation about him taking over for his dad in the elder Van Halen’s famous band.
Eddie Van Halen, 65, died after battling cancer for years and he left behind an impressive legacy as one of the world’s greatest guitarists.
His son is also a professional guitarist, but wants it to be known that there’s no truth to the rumor he’ll be a part of a new Van Halen with bassist Michael Anthony and former lead singer Sammy Hagar and drummer Alex Van Halen.
The younger Van Halen tweeted – using some colorful language – that it’s a “lie attempting to capitalize on these awful times” and asked people to “Please stop with this.”
He also said anyone furthering the rumor “is not only hurting the fans, but hurting me and my family.”
The 29-year-old has been working on his debut solo album for awhile and in July responded to a social media question about whether being the son of such a famous musician was a blessing or a curse.
“That’s a great question. It’s really equally both,” he responded. “Being who I am, I think people at the least will be interested in what my work will sound like, which is very nice. But on the other hand, if it’s not exactly what they want to hear or if I don’t try to sound ‘Van Halen-y’ enough for them they’ll hate me and won’t give me the time of day.”
“I’m fully prepared for a wave of hate when my music releases because it won’t be what people think it’ll be,” he added. “I’m not trying to be my father, I’m trying to be me.”