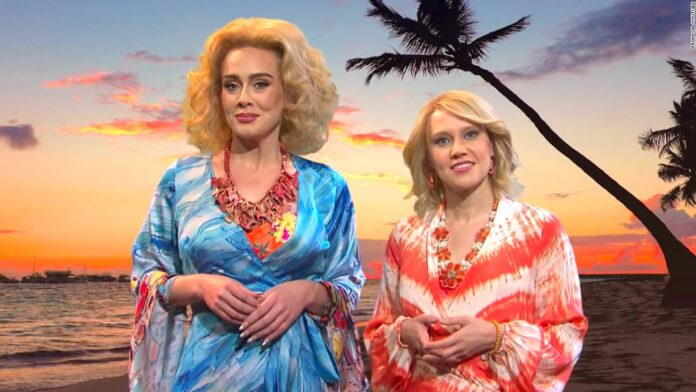 The skit, intended to mock sex tourism, sees the trio encouraging visitors to come to Africa, boasting repeatedly about its “tribesmen” and “massive bamboos,” as Black male extras carry women across a beach in the background.
Commentators on social media accused the sketch of propagating stereotypes about the fetishization of Black men, and some said it was ill-timed, given its airing during the EndSARS protests taking place in Nigeria.
“That Africa skit was tone def, insensitive and inappropriate,” Shenequa Golding, a journalist at R&B news website Vibe, wrote on Twitter. “Men and women in Nigeria, Namibia, South Africa and The Democratic Republic of the Congo are fighting for their lives and to reduce the continent as sexual destination for white women is shameful.”
MTV host Dometi Pongo added: “If you’re gonna try to touch that, it’s gotta be just a little smarter & more nuanced or don’t touch it at all. Not (right now).”
Adele, who hosted the fourth episode of the show’s current season on Saturday, broke character and burst into laughter several times during the scene.
The mock tourism commercial bills Africa as “the number one destination for divorcees of a certain age,” and features McKinnon’s character repeatedly boasting of the “tall, tall tribesmen” on the continent.
The three describe how they were taken in by tribes after their divorces, using suggestive wordplay to encourage other women to move to Africa.
During her musical performance in the same episode, singer H.E.R.’s band wore t-shirts bearing the slogan #ENDSARS, in solidarity with protesters demonstrating in Nigeria against police brutality and the country’s notorious Special Anti-Robbery Squad police unit.
CNN has contacted NBC Universal for comment. A representative for Adele declined to comment.
Adele, who is believed to be working on her fourth studio album, faced controversy in August after posting a picture of herself on Instagram wearing Bantu knots, a Jamaican flag bikini top and other carnival-wear popular in Afro-Caribbean cultures.
The singer was celebrating what would have been the Notting Hill Carnival, the world’s second-largest carnival, which usually takes place in the streets of west London every summer but was canceled this year due to the coronavirus pandemic.