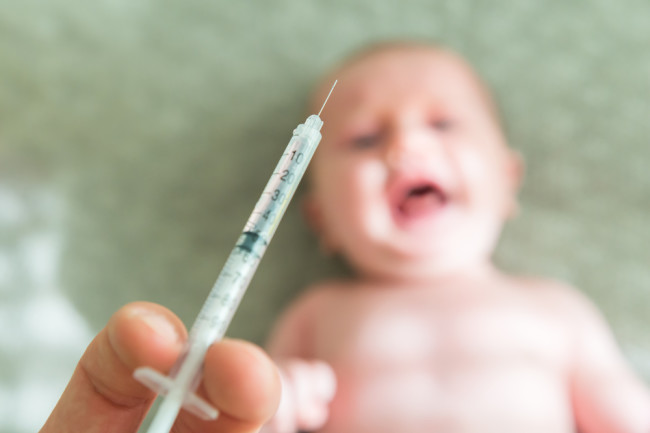 DPT: Vaccine Roulette. In April 1982, these words were emblazoned on television screens across America. They were accompanied by the sound of a beating heart, against the backdrop of images of children with severe disabilities, ranging from withered arms and legs, seizures and varying degrees of developmental delays. The children were purportedly damaged by a vaccine.

The documentary, DPT: Vaccine Roulette, blamed the pertussis portion of the combination diphtheria, pertussis and tetanus vaccine — a routine part of childhood vaccination schedules — for causing permanent brain damage. The documentary was a sensation, and triggered a nationwide wave of investigative news stories, congressional hearings and the rise of anti-vaccine consumer advocacy organizations across the country.

DPT: Vaccine Roulette was a turning point, according to Paul Offit, a pediatrician and director of the Vaccine Education Center at Children’s Hospital of Philadelphia. Offit has authored numerous books about vaccines including Deadly Choices, which detailed the roots of the now-pervasive anti-vaccination movement. “That documentary gave birth to the idea that DPT caused permanent brain damage and that a vaccine could cause harm,” Offit says. “Companies got hit with enormous lawsuits and a lot of them stopped making vaccines — and we almost lost vaccine manufacturing here in the U.S.”

Because of the litigation that almost destroyed the vaccine industry, public health officials were fearful the U.S. might return to a pre-vaccine era, when preventable but potentially lethal illnesses like measles and polio could once again spread unchecked. In response, Congress passed the National Childhood Vaccine Injury Act in 1986, which allowed children to be compensated for damages caused by vaccines but protected vaccine makers from legal action.

Decades later, we’re pinning our hopes on an effective vaccine to help us return to some semblance of normalcy. Months in lockdown have worn us down, the economy remains crippled, and millions are worried about catching the deadly COVID-19 virus. Achieving the holy grail of herd immunity to prevent further spread will rely on getting enough people inoculated. Yet, what could jeopardize an effective vaccination campaign is the widespread — and growing — reluctance to get a shot once it’s available.

Mistrust Rears Its Head Once Again

Only around half of Americans are willing to get a COVID-19 vaccine, according to a new Gallup poll conducted in September. President Donald Trump’s relentless push to have a vaccine available before Election Day raised concerns about the vaccine’s safety and effectiveness, according to the Gallup pollsters. The global race to produce a vaccine in record time only adds to public mistrust.

Black Americans — who have been hit hardest by the pandemic — are a population that’s particularly cautious of a vaccine, for good reason. Their distrust of the medical establishment is rooted in a long history of inferior treatment and ghastly federally-sanctioned medical experiments. A June poll by University of Miami researchers found that 42 percent of Black respondents agreed with the statement: “The coronavirus is being used to force a dangerous and unnecessary vaccine on Americans.” Just 22 percent of White and Latino respondents agreed.

“African-Americans feel they are second-class citizens and that they are not well served by the medical community,” says Offit. The other element fueling resistance “is the American public doesn’t trust Donald Trump or the administration regarding science, and they don’t trust the Food and Drug Administration because they’ve watched the FDA get arm-twisted by the Trump White House.”

Earlier this month, California Governor Gavin Newsom took the unprecedented step of announcing that he would have his own scientific team vet any COVID-19 vaccines before they are distributed in the state. And in a similar move in September, the National Medical Association, which is comprised of Black doctors, formed a task force to independently investigate the safety of any coronavirus vaccines.

This is an unfortunate turn of events considering that Americans have long relied on life-saving vaccines that stopped the spread of deadly diseases like smallpox, measles and diphtheria. Even though there were always pockets of resistance, the deep vein of skepticism we see today didn’t take root until DPT: Vaccine Roulette, according to Offit. Ironically, there had been serious complications with vaccines before — related to the 1976 swine flu outbreak and a bad batch of polio vaccines in 1955 — yet these incidents didn’t shake the public’s confidence in science.

The swine flu fiasco is a cautionary tale about what happens when political campaigns become enmeshed in disease outbreaks. In 1976, President Gerald Ford was fending off a primary challenge from Ronald Reagan when a group of army recruits in Fort Dix, New Jersey, were sickened by a virulent form of influenza. Tests revealed it had a similar genetic structure as the virus that triggered the 1918 Spanish flu epidemic that killed millions.

Vowing to protect Americans from this threat — and presumably to help his political standing — Ford pushed for a mass inoculation campaign which resulted in 45 million Americans receiving a swine flu shot. But the anticipated epidemic never materialized, and vaccinations were stopped in December of 1976. Unfortunately, 450 Americans who had gotten the shot developed a rare autoimmune condition called Guillain-Barré syndrome. This is a small number compared to the number of people who received the shot, however, there is still some controversy as to whether the shot actually caused this adverse reaction. But overall, the abortive vaccination campaign “was ill conceived,” says Offit.

But 1955’s so-called Cutter incident, which occurred in the wake of the successful introduction of the polio vaccine, had far more serious consequences. When health officials announced that the polio vaccine worked at a news conference in April of 1955, it grabbed headlines and Jonas Salk, the inventor, became a national hero celebrated with parades. Just three years before, in 1952, the nation experienced the worst polio outbreak in its history: 57,000 people were infected, 21,000 were paralyzed and 3,145 died.

But within a few weeks, the jubilation turned to panic when a bad batch of polio vaccines produced by Cutter Laboratories contained polioviruses that hadn’t been completely killed. More than 200,000 children had received these shots, which ultimately caused ten deaths and paralyzed 164 others. In the ensuing lawsuits, Cutter was cleared of negligence — their lack of expertise and experience was cited as the main reason for the disaster, and that the inactivation procedure they used had unanticipated flaws. However, the upside of this catastrophe was that it led to a better system of regulating vaccines, and polio vaccinations resumed later that year. “This was one of the worst biological disasters in American history — a man-made polio epidemic,” says Offit. “But people saw the tragedy as part of a learning curve, and it didn’t stop them from getting vaccinated — it was a different time then and people were less cynical and generally trusted pharmaceutical companies.”

Still, Offit is hopeful we can overcome the doubts around a COVID-19 vaccine. “Once the vaccine gets out there and starts to be given to people, attitudes will change,” he believes. “When we have a vaccine that’s safe and effective, I think people will take it.”