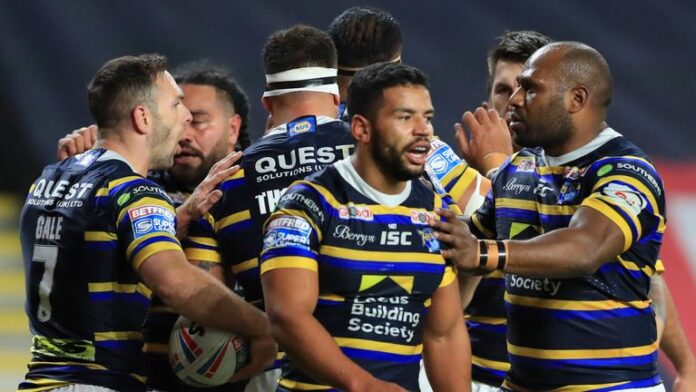 Late tries from Tom Briscoe and Rhyse Martin helped Leeds Rhinos defeat a spirited Castleford Tigers side forced to play much of the match with 12 men 28-24 in Monday’s second Super League match.

The Rhinos led 12-6 going into half-time on the back of tries from Ava Seumanufagai and Luke Gale, and with the Tigers a man down following Oliver Holmes’ red card. But Greg Eden’s superb solo score as the hooter sounded helped send the visitors into the break all square.

Eden grabbed a second after the break, but Leeds eventually hit back through Liam Sutcliffe, Briscoe and Martin to secure a win which was kept in doubt right up until the closing seconds thanks to a penalty try in Castleford’s favour.

Only Adam Cuthbertson and Alex Sutcliffe were missing from Leeds’ victorious Challenge Cup final-winning team, while Castleford coach Daryl Powell was able to field his strongest team for several weeks, with Jake Trueman reunited with Danny Richardson at half-back and Liam Watts bolstering the pack.

And it was Watts who opened the scoring after just two minutes, touching down Richardson’s perfectly-judged grubber kick to the line.

Richardson added the goal to make it 6-0 but it was level on 13 minutes when prop Seumanufagai forced his way over from close range after blockbusting centre Konrad Hurrell had been held short.

The flashpoint came on 29 minutes when Holmes aimed a kick at Myler while was on the ground and, although more petulant than violent, referee Tom Grant’s decision was a red card.

The numerical disadvantage began to show six minutes later when Gale went through a gap in the Tigers’ defence to score his side’s second try and Martin’s second conversion made it 12-6.

Any thoughts that the Rhinos would run away with the game, though, were quickly banished as Castleford stuck to their task and went back in front courtesy of two tries from winger Eden either side of half-time.

He grabbed his first after pouncing on an aimless kick from Cameron Smith after the half-time hooter had sounded and, after picking up the loose ball, sprinted 60 metres unopposed to the line.

Richardson’s goal levelled the scores and he was also on target after Eden finished off a neat cross-field move to score his second try four minutes into the second half.

From then on it was a rear-guard effort from the Tigers as they managed to hold up both Hurrell and prop Matt Prior over the line in quick succession.

As Leeds piled on the pressure, Myler and Prior both got to the line without being able to get the ball down but their perseverance paid off after 63 minutes when centre Liam Sutcliffe took Myler’s short pass to cut through wide out for their third try.

Martin could not tag on the goal but the Rhinos hit the front 12 minutes from the end when Castleford winger Derrell Olpherts fumbled the ball in front of his own posts and the ball was shifted smartly out wide for Hurrell to get winger Briscoe in at the corner.

Martin added the conversion and made sure of the win when he crossed for Leeds’ fifth try, although the Tigers had the final say when centre Cheyse Blair was awarded a penalty try in the last minute after he was obstructed in the pursuit of Paul McShane’s kick to the line.