Home World Uyghurs are desperate for action in Xinjiang. Some say only Trump can... 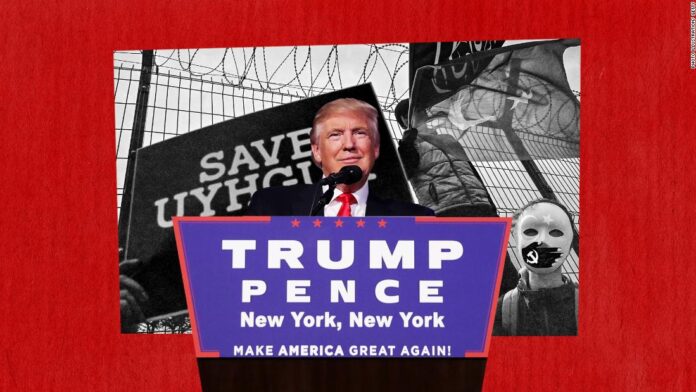 He and his family had voted for Democratic candidate Hillary Clinton, whose style of leadership they preferred over the brash businessman.
Now, four years later, Sidick is backing Trump over his Democratic rival Joe Biden.
He says the Republican leader is the only candidate strong enough to pressure China to end its repression of Uyghurs in Xinjiang.
Sidick hasn’t been back to Xinjiang, his homeland in western China, since 2009. He says in recent years his family and friends, as well as hundreds of students he recommended for overseas study, have vanished in mass detention centers.
Sidick said that, despite his initial misgivings over the US President, and suggestions that his commitment to the Uyghur cause is largely transactional, Trump’s administration had taken strong action against China over alleged human rights abuses in Xinjiang, including imposing sanctions and banning goods potentially made with forced labor.
“To deal with China requires a very strong leader. Donald Trump is such a leader,” he said. “Joe Biden is better diplomatically (at) making friends around the world but his softness will not work for China.”
The Trump administration, early in its term, took little action about reports of China’s alleged abuses, but began to attack Beijing on the Uyghur issue as relations soured between the two countries. In December 2018, the US State Department said as many as two million Uyghurs and other Muslim minorities had been taken to huge detention centers in Xinjiang.
Former detainees have described being subjected to indoctrination, physical abuse and sterilization. Beijing insists they are vocational training camps built to address the threat of religious extremism and denies allegations of widespread human rights abuses inside the region.
With Beijing showing no sign of changing course, some Uyghurs living abroad say a global pressure campaign led by the US government might be their best chance to push Chinese President Xi Jinping and his government into backing down.
“If the (rest of the) free world had done what US government has done, the Chinese communist government may have reconsidered its genocidal policy in the Uyghur region,” said Elfidar Hanim, the secretary of the Washington-based Uyghur American Association
Yet, there are signs that Biden, if elected, would keep US pressure on the issue. Biden’s campaign issued a statement saying it considers China’s actions in the region “genocide,” a label which the Trump administration was still debating earlier this year.
And some Xinjiang experts and Uyghur exiles point to Biden as more willing and able to work with nations to build a coalition against the Chinese government over its Xinjiang policies. Others are afraid he wouldn’t be tough enough on Beijing and favor the Trump administration’s uncompromising stance.
What they do agree on is that more needs to be done to hold the Chinese government to account. “China should not get away with this crime against humanity,” said Elfidar.

The Trump administration has taken action to punish China over its human rights abuses in Xinjiang. In June, President Trump signed the Uyghur Human Rights Act, which condemned the Chinese government for “gross human rights violations of ethnic Turkic Muslims in Xinjiang.”
One month later, the US government announced sanctions on top officials from the ruling Communist Party in Xinjiang. In September, some goods allegedly produced using the forced labor of Uyghurs and other Muslim minorities were banned from the US.
That approach has earned Trump some fans among the Uyghur community. When the US President left his hospital bed to greet supporters outside Walter Reed Medical Center on October 4, four blue flags could be seen among the crowd, representing East Turkestan, the name Uyghur exiles use for an independent Xinjiang.
But almost all of the legislation targeting Beijing over the detention centers was proposed by the US Congress, where there is growing bipartisan support for a tougher stance toward the Chinese government.
Trump appears to have had little involvement in the driving the legislation apart from signing it into law.
“My sense is that he doesn’t have a very strong grasp of human rights policy … I think he saw the Uyghur situation as something that was out there that can be used as a bargaining chip,” said Darren Byler, a Xinjiang expert and post doctoral research fellow at the University of Colorado.
In fact, Trump said in an interview with Axios in June 2020 that he had temporarily held off imposing sanctions on Xinjiang to help strike a trade deal with the Chinese government earlier this year.
Trump even appeared to be supportive of the detention centers when he discussed them with President Xi during a dinner between the two leaders at the G20 meeting in June 2019, according to former Trump Administration National Security Adviser John Bolton.
“With only interpreters present, Xi had explained to Trump why he was basically building concentration camps in Xinjiang. According to our interpreter, Trump said that Xi should go ahead with building the camps, which Trump thought was exactly the right thing to do,” Bolton wrote in his memoir. Trump denies the claim.
But regardless of Trump’s motivations or why the action was taken, Uyghur exile Rahima Mahmut said that under his leadership, the United States had taken more action toward China over the Xinjiang centers than any other country in the world.
“(In) all other Western, free countries including Europe, there hasn’t been any practical announcement, sanctions or list of officials or any kind of acts. That has happened in the US so comparatively the US is being the leading voice,” she said.

If the war of words at the United Nations is anything to go by, the world is still divided over China’s actions in Xinjiang.
In a statement to the UN on October 6, Germany spoke on behalf of 39 countries, mostly from Europe and North America, condemning China’s actions in Xinjiang, which the statement said amounted to “gross human rights violations.”
The same day Cuba submitted a rival statement on behalf of 45 countries, including Russia and Syria, supporting China’s “anti-terror” activities in Xinjiang. In mid-October, China was re-elected to the UN Human Rights Council, despite criticism from advocacy groups.
Byler said that as US President, Biden might be better situated than Trump to build a global coalition against China’s actions in Xinjiang, due to the former Vice President’s support for international institutions and traditional US alliances.
Under Trump, Washington has pushed a more aggressive and isolationist foreign policy, pressuring diplomatic partners such as Japan and South Korea to pay more for their defense while enacting sweeping “America First” policies like bans on immigration from certain countries.
In June 2018, the US withdrew from the UN Human Rights Council, a move criticized by US allies and human rights organizations. In December 2019, Biden said the US would rejoin the council if he became President.
“The Trump administration has done a lot of damage to American credibility when it comes to fact-finding, when it comes to human rights,” Byler said. ‘My hope is that a new administration, a Biden administration, would begin to divorce the human rights issues that are going on in China from trade disputes, that they’d pull back a lot of the harsh rhetoric.”
But Uyghur linguist and writer Abduweli Ayup said that he isn’t as interested in coalition-building or denunciations. He wants to see the Chinese government punished for its actions in Xinjiang.
Ayup, who currently lives in Norway, was arrested and detained for 15 months from 2013 over “illegal fundraising.” He said his sister and brother are still in detention centers in Xinjiang.
Like Sidick, Ayup was a supporter of Clinton — but now he wants Trump to be re-elected. “If you criticize (China), if you criticize their policy, it’s nothing. Right now we need to take real action, let them pay, let them lose, let them think twice when they take further step,” he said.
“It’s not a time to criticize or put pressure, no, take action. This is the time.”

Pro-Trump Uyghur exiles who CNN spoke to said they didn’t believe the current US President was particularly interested in the Xinjiang crisis, or sympathetic to their people.
But they said his administration, particularly Vice President Mike Pence and Secretary of State Mike Pompeo, had taken the toughest action yet, and would likely exert even more pressure, if granted a second term.
“Donald Trump doesn’t care for Muslims and Uyghurs very much … but on the whole, the US government did something that nobody else could do in the world,” said Sidick. “So we are very grateful for that.”
He feels that Biden working collaboratively with other nations to pressure China would likely lead to a watered down criticism compared to the staunch one offered by Trump.
No matter who is in the White House come next January, experts say convincing China to reverse its policy on Xinjiang won’t be easy.
The ruling Communist Party has a history of refusing to bow to domestic and international pressure, such as during the long-running pro-democracy protests in Hong Kong in 2019.
“It’s really hard to see what would make China change its mind on its Xinjiang policies. Xi has sort of taken it on as a key initiative and something that he’s staking his reputation on,” said expert Byler.
Many Uyghurs in exile were pessimistic about the future of their people in China.
Mahmut, who doesn’t prefer either candidate in the US election, said the actions taken so far by the US and other countries were just a fraction of what was required to address the injustices against her people.
“When you compare the scale of the abuse, I think the world let the Uyghur people down, completely,” she said.