Home Sport Could Chisora really fight for a world title? 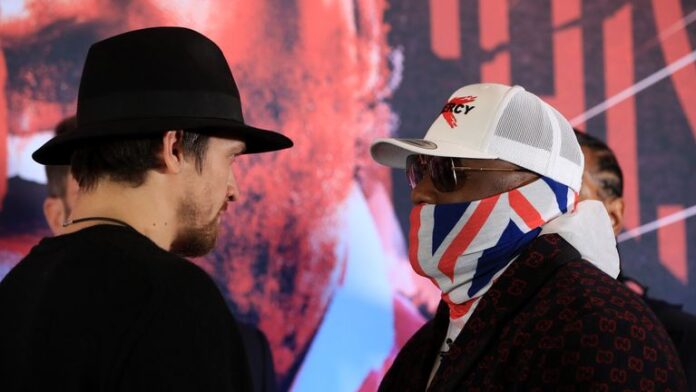 Derek Chisora potentially challenging his ally Anthony Joshua is “madness in itself” but would become a reality if Oleksandr Usyk is swept aside this weekend, says promoter Eddie Hearn.

Chisora must first cause an upset against the unbeaten Usyk on Saturday, live on Sky Sports Box Office, to inherit a position as the mandatory challenger to Joshua’s WBO title.

Chisora and Joshua retain a close relationship after emerging through the same amateur gym and have never seriously entertained fighting each other, but Hearn insists they would share a ring if a world championship was at stake.

“There is no official ruling from the WBO but, basically, if Chisora beats Usyk he becomes the mandatory challenger for Joshua which is madness in itself,” Hearn told Sky Sports.

“Liken it to Alexander Povetkin vs Dillian Whyte. Chisora is basically where Povetkin is – a top 10 fighter at the back-end of his career, he has fought for a world title and come up short, had some great wins to revive himself.

“[Chisora’s manager] David Haye is lobbying [WBO president] Paco Valcarcel to say: ‘Usyk is the mandatory for Joshua – if we win, we take that spot’.

“It’s a remarkable turnaround in his career.

“Chisora has put every drop of his soul into this camp and will leave everything in the ring trying to pull off one of the greatest upsets ever by a British fighter.”

Could AJ and Chisora put their allegiance to one side?

“Coming up, Chisora was a hero to AJ,” Hearn said.

“He looked up to Chisora who was fighting David Haye and Vitali Klitschko. So it’s a strange one.

“I’ve spoken about it before and the general feeling is that they would fight, particularly if Chisora was mandatory. It’s not one they would go looking for.”

Asked if Chisora was ever considered as an opponent for Joshua, Hearn replied: “Del is always a very credible option and a dangerous one. If they weren’t so close they would have fought already.

“But in a mandatory position? I can’t see anything stopping them from fighting.

“Chisora’s ambition is to have fun and prove people wrong and knock people out.

“He definitely wants to fight for a world heavyweight title and win it.”

Joshua vs Fury is the priority

Joshua must first defend his IBF, WBA and WBO titles against Kubrat Pulev on December 12, live on Sky Sports Box Office, a week after Fury plans a defence of his WBC belt.

Financial terms have already been agreed for Joshua and Fury to then decide the undisputed champion in 2021, which remains their preferred option.

“If Joshua beats Pulev he wants to fight Fury and I don’t see any fight getting in the way of that,” Hearn said.

“If Usyk wins, and Joshua beats Pulev, the ruling states that Joshua should fight Usyk next.

“But if Joshua wins he will apply to the WBO and say: ‘I would like to fight Fury for the undisputed title’.

“I really want AJ vs Fury to be for the undisputed title. The belts are important to Joshua. He hasn’t accumulated these belts and paid the sanctioning fees just to throw them away. He wants to be undisputed.

“But we also respect Usyk as mandatory challenger.

“AJ would like to fight Usyk as well. He thinks it’s an amazing challenge. He thinks Usyk is a great fighter.”

A Fury vs Chisora trilogy?

Fury and Chisora have twice shared a ring already but a third fight still has an outside-chance of materialising.

“I think it would be a great fight to have with ‘The Gypsy King’, because he’s always promised me a third fight,” Chisora told Sky Sports.

“He owes me anyway, because we speak every day, and he owes me that fight.

“He’s always saying he wants to give me another fight, so he’s a man of his word, so that would be the fight I would like to have.”