Home Sport The Final Word: Bucs are for real, Cowboys a hot mess 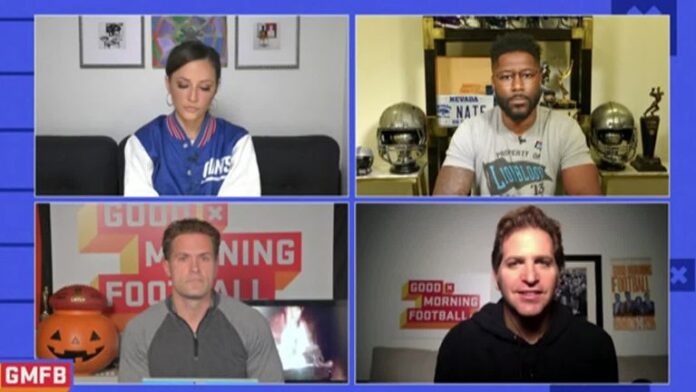 Sky Sports’ Neil Reynolds has the final word on another wild weekend in the NFL, picking out his five major takeaways, his player of the week and what is on his radar from Week Seven…

Week Seven in the NFL was crazy, especially in the final 30 minutes of the early games when touchdowns were flying in left, right and centre.

Due to a storm in Nashville, we also lost the sound of our main game for a few minutes which sent myself, Shaun Gayle and Rob Ryan into commentary mode for the Pittsburgh Steelers’ win over the Tennessee Titans.

1) The Bucs are for real

While his former team, the New England Patriots, were struggling to pick up a first down on Sunday, Tom Brady was tearing it up for the suddenly-red-hot Tampa Bay Buccaneers. The 43-year-old quarterback certainly isn’t acting his age on a talented and weapon-loaded offence. Brady threw for 369 yards and four touchdowns in a 45-20 win on the road against the Las Vegas Raiders.

The Bucs will be hoping the old ‘what goes on in Vegas stays in Vegas’ adage is not true! They will want to carry that form forward for the rest of the season. Brady spread the ball around on offence beautifully and his fourth touchdown pass, to Tyler Johnson, was the 559th of his glittering career, passing Drew Brees on 558 for first place all-time.

It took a couple of weeks for Brady to find his feet but in his last five games, he has thrown 15 touchdown passes and just one interception for a passer rating of 111.1. The Bucs – who are also playing aggressively on defence – are off to their best start in team history at 5-2. The last time they started this well was in 2002 when they went on to win the Super Bowl.

The Steelers won the battle of the last two unbeaten teams in the AFC, edging past the Titans 27-24. With Seattle losing on Sunday night, Pittsburgh are now the only undefeated team left in the league.

I went through the first two-and-a-half quarters of this game thinking the Steelers were putting the rest of the league on notice as they pounded their way to a 27-7 lead in Nashville.

But I came away thinking that both of these teams are high-end NFL outfits who could meet again in the playoffs in January. The Titans did not go quietly into the night. They stormed back and should have tied the game at the very end but for Stephen Gostkowski’s field goal miss from 45 yards. These are two quality teams and both are going to the playoffs.

3) Cowboys are a hot mess… quite literally!

Monday saw Dallas Cowboys defensive coordinator Mike Nolan meet the media via a Zoom call. All textbook and totally normal. But the Cowboys don’t even seem capable of doing anything normal right now.

In the middle of answering a question from the media, Nolan rubbed some leftover hot sauce from lunch into his eye and spent quite a few awkward seconds trying to ease his discomfort while only making it worse. It was a moment that immediately went viral and summed up the Cowboys’ season.

Dallas are a mess. Leading into Week Seven, anonymous players went as far as to say the coaches are “just not very good at their jobs”. Head coach Mike McCarthy appears to have lost this team and they were handily beaten 25-3 by Washington on Sunday.

During that game, quarterback Andy Dalton was knocked out with a vicious and illegal hit from Jon Bostic. And McCarthy called out his team for not appearing to be angered by the tackle. There is a very good chance McCarthy will be one and done as head coach of the Cowboys if things continue to unravel at this rate.

The Atlanta Falcons continue to find new, head-scratching ways to lose games as they continue to break the hearts of their fans week after week.

Atlanta trailed Detroit 16-14 with just over a minute remaining and they had the ball at the Lions’ 10-yard line. Detroit were out of time-outs and powerless to stop the clock as Todd Gurley ran through the line. That’s why two Lions players pulled themselves off the tackle and tried to let Gurley score.

If he had not scored, Atlanta could have run the clock all the way down to zero and kicked the easiest of field goals to win. But, Gurley forgot that very simple premise until he was nine-and-a-half yards downfield, then he couldn’t stop his momentum and scored a touchdown that stopped the clock with 1:04 left, handing Detroit a lifeline that should never have existed.

Trailing by six, Matthew Stafford went to work and took the Lions 75 yards in eight plays, capping the drive with an 11-yard touchdown pass to T.J. Hockenson as the clock hit zero. Game tied. Extra point to win. But the Lions were penalized for over-exuberant celebrations which meant a 48-yard conversion was required.

Of course, Matt Prater made the kick and the Falcons had written another chapter in their miserable recent history.

The San Francisco 49ers pounded the New England Patriots during a dominant 33-6 win on the road on Sunday night. I’ll get to the Patriots and their problems in just a moment, but I came away very impressed with the 49ers as they displayed the depth required to succeed in this season’s NFL.

The key players missing in San Francisco would be too many to list, but it is worth noting that they were down key running backs Raheem Mostert and Tevin Coleman. They also lost Jeff Wilson to injury but not before he had topped 100 rushing yards and scored three times. The next off the production line was JaMycal Hasty as the 49ers rushed for 197 yards and four touchdowns.

As for the Patriots, Cam Newton looked terrible at quarterback as he was intercepted three times. He is really suffering from a lack of receiving weapons downfield and looks racked by indecision.

It’s hard to completely write off a Bill Belichick-coached team but this does not look like a playoff outfit to me and New England may be tempted to see what Jarrett Stidham can do at QB. Cam has been that bad.

Player of the Week: Baker Mayfield

Nursing sore ribs and coming off a poor performance against Pittsburgh, Baker Mayfield had much to prove as his Cleveland Browns took on the Cincinnati Bengals on Sunday. Mayfield’s cause was not helped by him missing his first five passes and getting intercepted.

But he rebounded beautifully and ended the day with 22 completions from 28 attempts for 297 yards and five touchdowns, throwing the winning score to Donovan Peoples-Jones from 24 yards out with 11 seconds remaining. Cleveland secured a big 37-34 victory to move to 5-2 on the year and Mayfield was leading the way.

Play of the Week

Brady’s 33-yard touchdown pass to Scotty Miller in Tampa Bay’s beatdown of the Raiders was an absolute thing of beauty. Brady arced the ball into the back corner of the endzone where only his guy could make the catch. He couldn’t have been more accurate if he walked 40 yards downfield and placed the ball into Miller’s hands.

Coach of the Week: Ron Rivera

On Sunday, Ron Rivera mustered up more super-human strength to coach his Washington Football Team while battling cancer. And he dialled up enough big plays to secure a comfortable 25-3 victory. On Monday, Rivera walked out of the Inova Schar Cancer Institute in Virginia and rang that bell to signify the end of treatment for skin cancer. What a moment!

I’ve seen a loved one ring that bell when my wife completed her breast cancer treatment and it is as emotional as it gets, believe me. I’m so glad for Rivera, who put forth a Herculean effort to keep coaching while undergoing treatment.

The situation in Jacksonville should have me on high alert, not just on my radar. I really like Doug Marrone and we always have very nice conversations whenever we meet, but he is in trouble as head coach of a team that has now lost six in a row and conceded more than 30 points in every game, tying an unwanted NFL record.

The Jaguars have lost 12 of their past 15 games and 10 of those losses have been by double digits. To be honest, I think any bye week firing would have come on Monday so the Jags may be moving forward with Marrone… for now. But he needs a very strong second half of the season to save his job and I’m not sure his team is capable of putting together that type of run.

Week Eight in the NFL gets underway with Atlanta Falcons @ Carolina Panthers on Thursday Night Football, live on Sky Sports NFL from 12.20am, Friday.