Home World Meet the woman who could lead the US Treasury in a Biden... 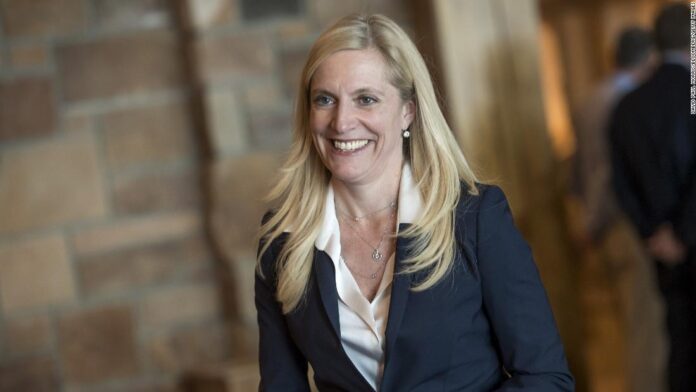 Analysts from Washington to Wall Street say a leading contender would be Lael Brainard, a current Federal Reserve governor with years of practical experience for the job.
Brainard, who could replace Steve Mnuchin, would be the first woman to serve in the role. Despite some concerns from experts that she might look to impose tougher regulations on big banks, she’s not nearly as progressive as Senator Elizabeth Warren, another rumored contender.
“There could be a tug of war between progressives and more moderate Democrats, but many people would prefer someone with both a deep background in economics and monetary policy,” said Quincy Krosby, chief market strategist at Prudential Financial.
Brainard checks both of those boxes, a variety of experts agree.
Brainard couldn’t immediately be reached for comment. A spokesperson for the Biden Transition team told CNN Business that they are “not making any personnel decisions pre-election.” The Fed declined to comment.

Brainard has practical experience even beyond the Fed that investors may like, including stints at McKinsey at the start of her career and time at The Brookings Institution. She also served in various economic roles in the Clinton and Obama administrations.
“Brainard is highly qualified,” said Mike O’Rourke, chief market strategist with JonesTrading in a report last month, noting that her experience in past administrations and the private sector may make her a better fit for the job than Warren, who has a reputation for seeking aggressive oversight of big banks and other large corporations.
A Warren selection would likely rattle investor confidence. In times of economic or financial crisis, the Treasury Secretary and the CEOs of the banking industry need a good working relationship. That would be hard to envision if Warren led Treasury,” O’Rourke said.
Other names mentioned as potential Treasury Secretary nominees in various reports include former Fed chair Janet Yellen and former Fed governor Sarah Bloom Raskin, as well as Mellody Hobson, co-CEO of money manager Ariel Investments.
But Brainard may stand out from the rest of the contenders, several experts said.
“In terms of sheer experience, Brainard has punched all the tickets. It would be hard to imagine a more mainstream background,” said Robert Kuttner, co-founder of The American Prospect, a liberal-leaning nonprofit publication, in a report last month.
“For the Wall Street allies of the Biden campaign, Brainard is ideal. As a career scholar and public official, she would presumably be less of a lightning rod for progressive critics than a Wall Street figure,” Kuttner added.

Brainard has also spoken about issues such as gender inequality in the workforce — a key economic concern that could become an even bigger problem as a result of the coronavirus outbreak.
“If not soon reversed, the decline in the participation rate for prime-age women could have longer-term implications for household incomes and potential growth,” Brainard said during a speech at the Society of Professional Economists Annual Online Conference this week.
Brainard, like Fed chair Jerome Powell, has also stressed that Congress needs to do more to help stimulate the economy, which some have argued is more like an uneven, K-shaped rebound as opposed to a V-shaped, rapid recovery.
“Further targeted fiscal support will be needed alongside accommodative monetary policy to turn this K-shaped recovery into a broad-based and inclusive recovery,” Brainard said in this week’s speech.
That might be easier to accomplish if a blue wave gives Democrats control of the Senate. But even if Republicans retain their majority position in the Senate, Brainard is viewed as someone who can get things done in a bipartisan fashion.
“If Biden wins, Brainard is an obvious choice. She has a reputation as being someone who isn’t afraid to push boundaries but also someone that conservatives could work with,” said John Norris, chief economist with Oakworth Capital.
Norris added that Brainard could also help restore fractured economic relationships with other countries, particularly China, and he thinks she’d be less likely to advocate for trade wars.
“She is such a layup that investors would probably be disappointed if Biden didn’t name her,” Norris said. “She really is the perfect person for this position.”