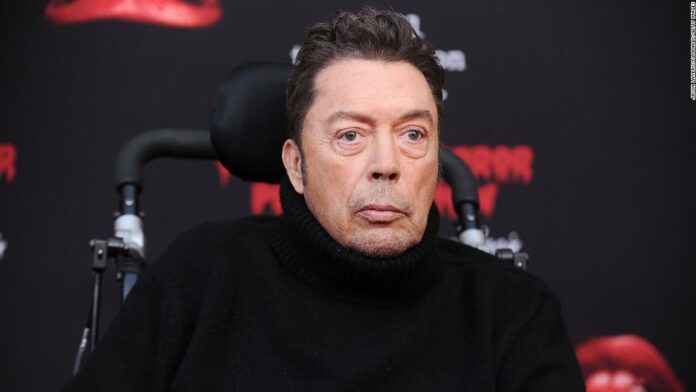 Tim Curry will join some of his fellow “The Rocky Horror Picture Show” cast members for a live stream to benefit the Democratic Party of Wisconsin, according to a press release.
It’s just one of the reunions the organization has hosted, including the “Happy Days” cast.
Original “Rocky Horror” stars Barry Bostwick and Nell Campbell, as well as several others, including Connie Britton, Wilmer Valderrama, Rosario Dawson, Lance Bass, Jason Alexander and David Arquette, will participate in the Rocky Horror Show Livestream on Halloween at 9 p.m. CT.
Curry left the industry for a bit after he suffered a major stroke in 2012 and has used a wheelchair since.
Playing Dr. Frank-N-Furter in the 1975 cult classic “The Rocky Horror Picture Show” made him famous and in 2016 he had a role in the TV movie “The Rocky Horror Picture Show: Let’s Do the Time Warp Again.”
The Wisconsin Dems are hosting a “Superbad” reunion and watch party on Tuesday which will include stars Jonah Hill, Seth Rogen and Michael Cera.