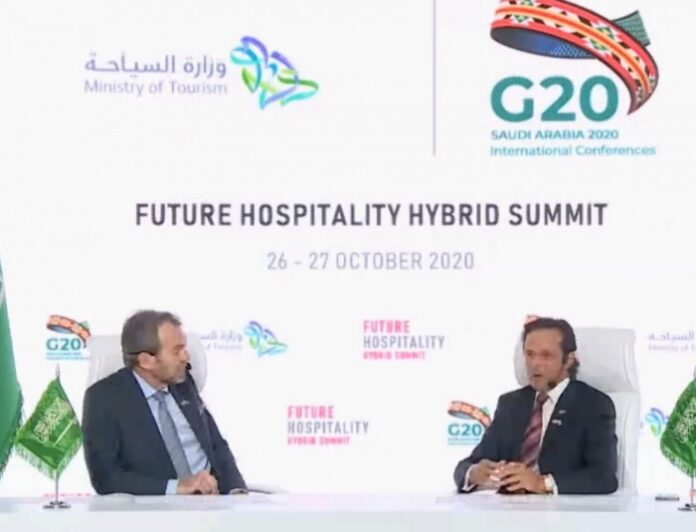 John Pagano, chief executive of the Red Sea Development Company, has argued tourism has a vital part to play in the future of Saudi Arabia.

With plans to welcome 100 million guests annually by 2030 on track, and the country opening to foreign investment in hospitality, he said the sector would be vital in diversifying away from oil.

Speaking at the Future Hospitality Summit in Riyadh this morning, Pagano said: “The Red Sea Development is one of the most ambitious tourism projects anywhere in the world today.

“Saudi is seeking to diversify its economy away from oil, and tourism will be a big part of that.

“Tourism in Saudi Arabia is under-represented currently – whereas it accounts for ten per cent of global GDP, it is only 3.4 per cent here in the kingdom.”

The company was established to drive the development of the Red Sea Project, a luxury tourism destination that will set new standards in sustainable development and position Saudi Arabia on the global tourism map.

The project will be developed over 28,000 square kilometres of pristine land on the west coast of the country and includes a vast archipelago of more than 90 islands.

The destination will include hotels, residential properties, leisure, commercial and entertainment amenities, as well as supporting infrastructure that emphasises renewable energy and water conservation and re-use.

Activity for the first phase of development, which focuses on enabling the infrastructure to support future work, is well underway.

A marine infrastructure contract awarded in 2019 includes the construction of a 3.3 kilometres crossing to Shurayrah (the main hub) and development has begun at the coastal village, which will be home to around 14,000 people who will work at the destination.

Pagano added: “Covid-19 has presented some challenges for us – but through the hard work our team and the support of our stakeh

If Kim Jong Un destroyed North Korea’s economy to keep Covid-19 out, will sanctions stop him from pursuing nuclear weapons?