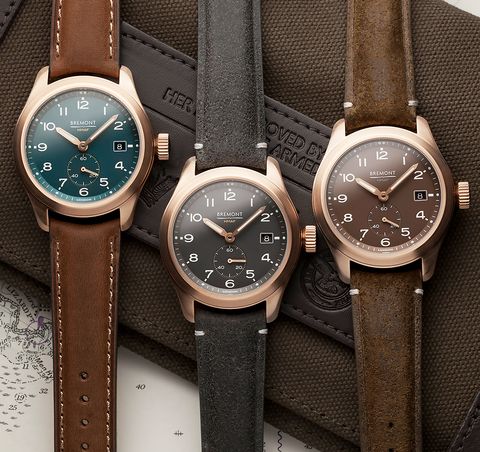 British watchmaker Bremont has long had an enthusiastic following amongst military pilots for its flight-inspired watches. Since 2002, brothers Nick and Giles English, keen pilots themselves, have worked hard to foster ever-stronger links with both private military customers and official bodies. Bremont’s airworthy watches sell to pilots serving in air forces across the globe, as well as to people who are just nuts about planes.

Limited editions feature aluminum derived from a real wartime Supermarine Spitfire, cloth from the wings of the original Wright Flyer, and the very rare MB1, which you can only buy if you have successfully ejected from a fighter plane in a Martin Baker ejector seat. Somewhat niche as a market. But it’s not all up in the air or limited edition.

The Broadsword Bronze in Sotek, Slate, and Tobacco.

In 2019, Bremont landed something of a first in a partnership with the British Government’s Ministry of Defence, when its Armed Forces Collection landed the right to carry the emblems of all three wings of the British military: the Army, the Royal Air Force, and the Royal Navy. These devices are carved into all the case backs of Broadsword, Argonaut, and Arrow watches. 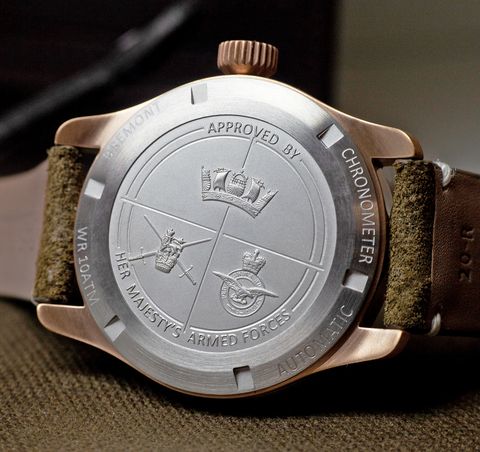 Thanks to a partnership with the Ministry of Defence, Bremont can use the signs, symbols, and Heraldic Badges of the Royal Navy, British Army, and Royal Air Force.

Bremont adds to that collection today with a striking new bronze edition of the Broadsword, with three different and interesting dial colors. There’s “Slate,” a dark military green/teal combo known as “Sotek,” and “Tobacco.” A thick layering of Luminova ensures the numbers pop off the dial at night. The particular bronze alloy from which the two-part case is made has 8 percent tin, a mix used by naval engineers for a lot of the metalwork—including the propellers—on ships for its high resistance to corrosion. But while bronze may make it suitable for the high seas, this watch is inspired by field watches worn strictly on terra firma. 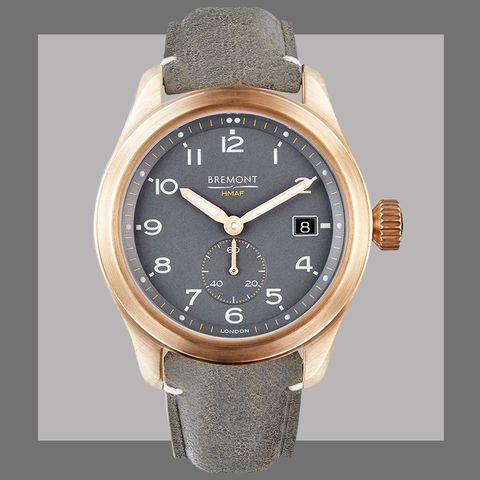 Broadsword is Bremont’s own take on the Dirty Dozen, a storied commission from Britain’s Ministry of Defence during World War II, to equip certain key ranks and units in the British Army. Twelve different watchmakers, including IWC, Longines, and Omega, were selected for the job, hence the “dozen” and what they made were unified by a simple and functional black dial and a white display, heavy on the lume and with a seconds subdial at 6 o’clock. The new Broadsword editions take this look a little further afield, but still pay homage to a piece of watchmaking history.