Home World North Korea is going to be a major headache for whoever wins... 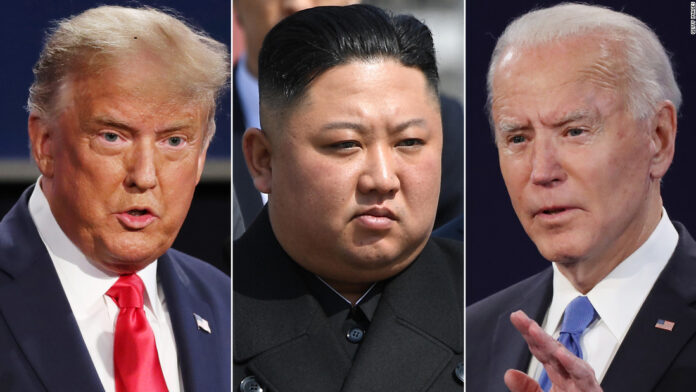 Pyongyang’s first missile test during Donald Trump’s presidency came even sooner. On his 23rd day in office, as he and Japanese Prime Minister Shinzo Abe sat down for dinner on the terrace of the US President’s opulent Florida club, Mar-a-Lago, North Korean leader Kim Jong Un oversaw the successful test launch of a solid-fueled ballistic missile.
So if former Vice President Joseph Biden were to unseat Trump in the November 3 presidential election, would North Korea again conduct some sort of provocation in a new administration’s early days?
When it comes to divining North Korea’s intentions, some words of wisdom variously attributed to both Mark Twain and New York Yankee’s legend Yogi Berra ring particularly true: Predictions are hard, especially about the future.
This is, after all, North Korea, one of the world’s most isolated societies and secretive governments.
But we do know that Pyongyang closely studies the machinations in Washington. And, as they proved during the early days of the Trump and Obama presidencies, Kim and his advisers know how to grab America’s attention — and they may choose to do so after taking the backseat to the US election, protests over racial injustice and a global pandemic.
A Biden administration, or Trump during a second term, could be forced to deal with Pyongyang sooner than they’d like.

Disarming North Korea remains one of the United States’ most intractable foreign policy issues. Since 2006, Pyongyang has successfully tested six nuclear devices and three intercontinental ballistic missiles (ICBMs), weapons Kim says are meant to deter foreign aggression and ensure the continuity of the regime that he leads with an iron fist.
The country’s dogged pursuit of these armaments, however, has come at a tremendous cost. Sanctions punishing Pyongyang for its nuclear program essentially bar North Korea — one of the world’s poorest countries — from trading with the outside world. That means there are few opportunities for North Korea to improve its economy and increase the livelihood of its people, a key promise Kim has made to his people.
The US hoped that sanctions would cripple North Korea and force Kim to negotiate. And President Trump had hoped that by becoming the first sitting president to sit face-to-face with a North Korean leader, he could engineer some sort of breakthrough. But despite these one-on-ones, negotiations have been at an impasse since the two leaders’ second summit in 2019 in Hanoi.
Trump wanted some sort of “big deal” that would see North Korea give up its nuclear program for immediate sanctions relief, but Kim was only prepared to shut down Yongbyon, the biggest and best-known facility in North Korea that produced fissile material for nuclear weapons, in exchange for sanctions relief, according to Trump’s former national security adviser, John Bolton.
That wasn’t enough for Trump, so he walked.
“There were opportunities potentially having a direct engagement between the leaders but, as things showed, it wasn’t a silver bullet to resolve the issues,” said Markus Garlauskas, a former national intelligence officer for North Korea on the US’ National Intelligence Council.
Hanoi, Garlauskas said, proved that it wasn’t a lack of communication or leader-to-leader contact that had prevented a breakthrough.
The “fundamental obstacle,” he said, is “Kim’s lack of interest in giving up those nuclear weapons, and his willingness to sustain very high cost to keep them.”

To date, the Trump administration has sold its North Korea policy as a win. That’s because since November 2017, Kim has not tested any nuclear weapons or long-range missiles — the weapons designed to deliver a nuclear warhead to the United States homeland.
During their first summit, Trump and Kim struck what appeared to be a tacit agreement that, as long as talks were going on, North Korea would not test ICBMs or nuclear bombs. Trump, in turn, scaled down the number of military drills the US conducts with South Korea. These exercises are meant to keep troops ready in case of conflict, but North Korea sees them as hostile and will often claim they are practice for an invasion.
The accord, however, did not apply to shorter-range missiles that could be used to target US troops or allies in the region, which North Korea has continued to test. And Pyongyang made no commitment to stop developing or enhancing its weaponry in ways short of testing them.
On October 10, North Korea rolled out what is believed to be one of the world’s biggest ICBMs at a military parade on a significant anniversary in Pyongyang. Weapons experts said it appeared the gigantic missile was designed to carry multiple warheads to penetrate missile defense systems — proving that North Korea’s commitment to stop testing ICBMs didn’t mean it wasn’t going to stop working on them.
If North Korea was to consider this new missile viable, it would need to conduct a test launch. Though Kim pledged not to test ICBMs during US negotiations, he said in a speech last year that he no longer felt duty-bound to comply with the promise. He has blamed the US for the diplomatic impasse and says it has been “deceived by the US,” wasting 18 months on talks.
Now, some experts worry that testing the new mammoth ICBM could be a possible next step to get attention after the election.
“I would not be surprised at all to see the North Koreans take some kind of a step in the ballistic missile testing arena or in the nuclear testing arena, particularly if Biden wins the election,” said Evans Revere, a former assistant secretary of state for East Asia and the Pacific. “I think the North Koreans are going to want to have him start out on the back foot to the extent possible. And one way to do that would be what they did with President Obama.”
Biden’s biggest challenge, experts say, could come during the presidential transition. His campaign website has just one vague sentence on North Korea policy, so it’s likely Biden and his aides would need to quickly identify a strategy to get North Korea to move toward denuclearization, and to find the right people to implement that strategy.
Joseph Yun, who served as a State Department special representative for North Korea under Obama and Trump, said it would be crucial for Biden to get in touch with the North Koreans and lay out his red lines as quickly as he can, so the North Koreans do not try to discover them on their own.
“It’s very important that in the beginning to get off on the right foot,” Yun said. “You might want to send a message to North Korea, saying things like, We want to talk, we are prepared to talk, but for now, give us time and please don’t do any tests.”
But each candidate has unique advantages and disadvantages. Trump’s relationship with Kim might help continue to keep the temperature down on the Korean Peninsula, but his commitment to total denuclearization up-front remains unrealistic.
Biden has been critical of Trump’s relationship with Kim, whom he called a “thug” at the final presidential debate Thursday. Still, the former vice president has a chance to reset things. He does not need to demand full denuclearization immediately — though he will surely know the failed history of previous incremental deals. Biden will also have to convince Japan and South Korea that Trump’s transactional approach to alliances was a one-off and assure them that Washington is committed to their defense, regardless of cost.
But the reality is that Biden and Trump face the same challenge when it comes to Kim: How do you get North Korea to stop developing nuclear weapons and ballistic missiles and, eventually, give up arms it sees as vital to deterring adversaries?
So far, neither appears to have the answer.