Home Lifestyle Anderson .Paak Is Shaping the Culture at Every Turn 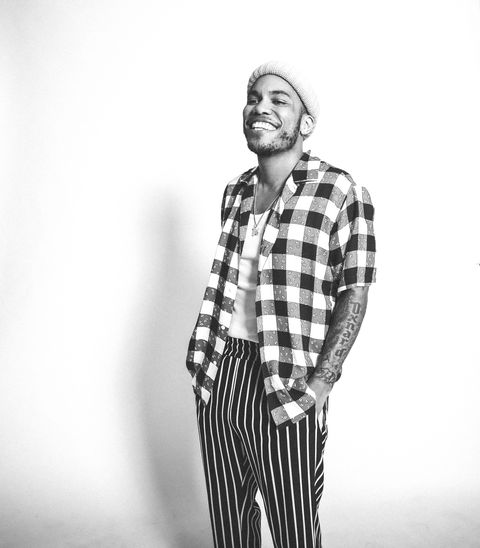 Anderson .Paak had a version of his latest single, “Jewelz,” nearly ready to go way back in February. He was playing around with it, working on the mix, but he didn’t release it. “I didn’t feel it was the right time,” he says. Instead, in June, the world got a very different kind of song from a musician known for his ability to jump effortlessly across genres and moods: “Lockdown.” Flipping back and forth between .Paak’s easygoing rapping and sweetly soulful singing, with a pocket so deep you want to nestle into it, the track and its accompanying video take a quiet groove and turn it into a vehicle to express the trauma at the heart of this summer’s protests across the U.S.

“There are so many songs where people, they got a good message, they’re saying things that needs to be said, but they abandoned the song,” .Paak explains. “Some people are willing to do that, but the balance is very important to me. So I wanted to go back and make sure the lyrics were right, make sure I was talking about everything. I had to talk about the system, and why people are mad. It has to cover everything. And, also, the beat has to slap.”

.Paak says he felt the need to “give an offering for the movement,” with his song “Lockdown.”

But “Jewelz” was still waiting in the wings, and—talk about a balancing act—as he was giving voice to the emotions spawned by a pivotal moment in American history, .Paak was also putting the final touches on a partnership with Vans. It was a happy moment, better tuned to the bright, poppy song. So he dropped it along with an animated video showcasing his upcoming Vans collection. A reflection of his SoCal roots—the two shoes he designed, along with stylist Jasmine Benjamin and the team at Vans, are named “Venice” and “Malibu”—it’s also the realization of a years-long relationship with the brand.

“Coming up as a musician in L.A. I was pretty broke. I couldn’t afford no Jordans, no keeping up with the Nike, no nothing,” he says. “Vans was my go-to and it just became something that stuck with me.” Now, he’ll be the brand’s first-ever global music ambassador, designing product but also popping up at events all over the world (when that’s, you know, possible to safely do). In turn, Vans will be working with .Paak’s Brandon Anderson Foundation, a non-profit focused the arts and supplemental education, and .PaakHouse, the first initiative from the foundation aiming to create a “safe-haven” through community outreach and events.

Over the course of our conversation (which has been condensed and edited), .Paak delved into the excitement of working with a brand that was part of the culture when he was growing up, the “pain and torture” behind so much “sparkly and fun” music, and why he felt compelled to “give an offering for the movement” with “Lockdown.” 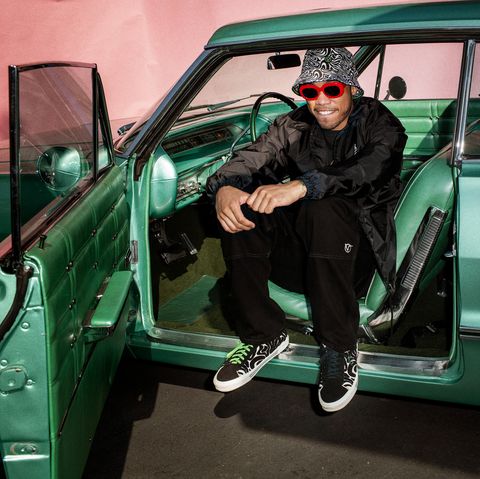 Let’s talk about how the Vans collaboration came together.

We had been just talking about it for years and eventually we got to really sit down and just plan things out. It’s been about two-year process. They told me it was more about doing something for the long term and really making some history, going in-depth as far as designing my own shoe and being part of their long legacy. I was super hyped. From coming up in Ventura County, Oxnard, Vans was just something that was always ingrained in culture. So I was all for it.

You announced this collaboration by dropping the video for your song “Jewelz,” which feels very bright and happy, but the chorus kicks off with, “I ain’t even put my jewels on / I ain’t even played my latest greatest song.” It feels like you’re saying we’re only seeing part of the picture.

As I continue on this journey and making music, for me it’s about the layers. And a lot of these songs come from deep conversations. When we were making “Jewelz,” I was sitting down with Timbaland and he was talking about how, to achieve these certain levels of success and greatness, it takes a lot of pain and torture, lonely nights, sleepless nights. Even though it might seem sparkly and fun, there’s a lot that goes on behind it that might be pretty dark for some people. But out of that can come a beautiful jewel. You know what I’m saying? Out of all that pressure, something could come out really shining for the people to see and for the people to feel good.

The “Jewelz” video features your son, albeit in animated form. He’s also in the “Lockdown” video, which deals with this summer’s protests and the pandemic—it’s a very different feeling. How do you balance the levity with the seriousness of addressing what’s going on in the world?

We had “Jewelz” since February or so. I was ready to go with it earlier, but I didn’t feel it was the right time. I felt like there was a lot more going on in the world and I feel like people weren’t ready to receive that yet. And I personally didn’t feel comfortable with putting that music out, when there were other topics that I wanted to cover first. You got to eat your dinner before you get to your dessert, and I felt like that’s what needed to happen with “Lockdown,” I wanted to address some things, and there was an urgency with that. So I went in and did the song in the midst of everything going on. Shout out to Dave Meyers, too, who was ready to go with the video. We all shot that in a day. I don’t know if I’ve ever been a part of something that moved along that fast and was executed that beautifully. I felt like I wanted to give an offering for the movement.

When Marvin Gaye did “What’s Going On,” that was his offering for the movement. I don’t know if he knew how big that song and how timeless that song was when he made it, but I’m pretty sure he just had to get that off his chest. A lot of things that he’s talking about, that stuff is still going on. So these songs have to exist. It’s the responsibility of the artists to speak on what’s going on and reflect the times. Somebody has to do it. A lot of people are working nine to five, a lot of people are doing god knows what, and they need a soundtrack. They need someone to put these things in words and give them something to feel good about even in the midst of all this chaos. I was doing the same thing with “Lockdown,” and I felt like that was necessary.

And it was important to me to keep the integrity of the song. There are so many songs where people, they got a good message, they’re saying things that needs to be said, but they abandoned the song. The song, it don’t slap, right? It don’t really make you feel good. It don’t have a groove to it. Some people are willing to do that, but the balance is very important to me. So I wanted to go back and make sure the lyrics were right, make sure I was talking about everything. I had to talk about the system, and why people are mad. It has to cover everything. And also the beat has to slap. I knew people were going to take it however they want to take it and not everybody was going to love it, but I want those few things to shine and I’m really proud of this song.

Are there any other artists that you think of—historically or currently working—when you think of the contribution to the moment, who you look to when you want to try to stay motivated?

I mean, I got it tatted on my chest. Stevie Wonder, Rob Davis, Aretha Franklin, James Brown. But then, I pretty much love the adventure. That’s why every artist I take a little bit from, I love their story. I always think back like, “What would they do?” Artists like Marvin Gaye: What would he do in this scenario?

I’m curious if there are any songs you heard growing up that changed how you looked at the world or thought about a specific issue?

Coming up for us, man, my first experience of racism or seeing that people could be cruel to people of color was watching Rodney King in the ‘90s. He was beat up by cops, and I remember shortly after that, getting into NWA and hearing songs like “Fuck The Police,” and then songs like “911 Is a Joke” and “Fight The Power” by Public Enemy. Even when I was younger and seeing artists come together when Quincy doing “We Are The World”—that’s how I got hip to, There is world hunger, there’s people that were starving. There are a lot of songs like that in the hip-hop genre. Those were people the who were pushing it, and that influenced me, too, even now. 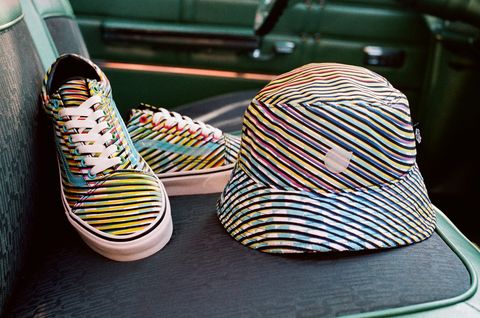 A bit of an abrupt segue, I admit, but I want to close out the conversation talking a little more about the collection itself. You’ve got two shoe styles, the Malibu and the Venice, which you created with the Vans team and your stylist Jasmine Benjamin. Do you have a favorite? Is that impossible to answer?

No, no. It’s dope that, since we’ve been working on them, you go through so many samples and see all the kinds of different canvases they have. And they have so many. I always thought it was just the Old Skool, the Slip-On…but they have so many canvases. And I think my favorite right now is probably the Malibu, because I’m in love with the Sid canvas, with the chenille on it and just the shape of it.

That shoe also goes well with everything, just a black and white shoe. We wanted to have one that was just like, “Ah!” so we did everything we wanted to do with the Venice. Okay, my first shoe? I’m going to just have fun. It’s like a funk psychedelic rave. You know what I’m saying? And I’ll do everything but the kitchen sink on that shoe. And for both shoes we wanted a lot of textures and a lot of fun, but more recently I’ve been rocking the Malibu man. I love how they look with the jeans, I love how they look with shorts, the texture. They’re low-key, but they’re high-key at the same time. 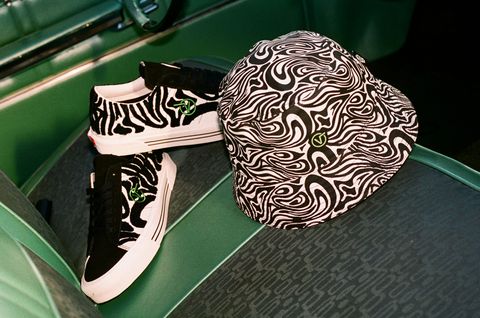 I had a bunch of crazy ideas and we just went back and forth, and I’m just really happy with what we have. In an era where there’s a lot of stuff that looks the same, and a lot of people, especially in hip-hop, are afraid to stand out and wear colors and have fun, I just feel like that’s something that me and my crew represent. We want people to be free. Honestly, if I could put it in one word, it’s that: freedom.