Home Lifestyle I Broke Up With My Boyfriend Because He Refused to Wear a... 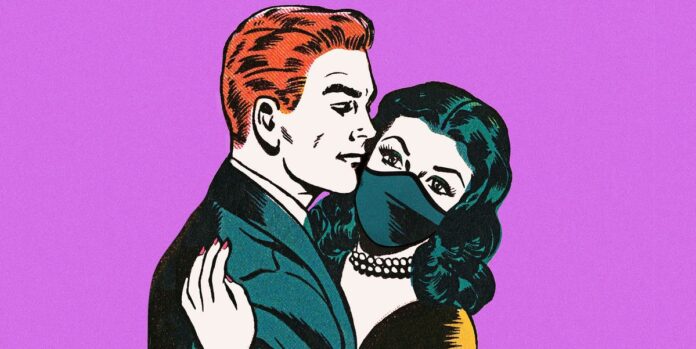 This year has been tough on a lot of relationships, but for one New Yorker, it was extra difficult as the pandemic revealed new sides of her boyfriend, a 34-year-old working in tech. Here, the 35-year-old publicist (who wishes to remain anonymous) tells her story.

In January 2020, my then-boyfriend moved into my studio apartment in Manhattan. We had been dating for nine months and things were going really well. I have lived with a guy before and I was ready for him to move in, but this was a big step for him because I was his first serious girlfriend.

On paper, we made sense. When we met, I remember thinking, this is who I’ve always pictured myself with. He checked all of the boxes: he’s tall, has a great smile, and wears stylish glasses, is successful and motivated in his career, has a really warm personality, and a quirky sense of humor. We connected most over our love of food and cooking; on our second date we went grocery shopping and made a big meal together. Things were going so well that just four months into our relationship, he introduced me to his parents. I was a little surprised that he introduced me so soon, but I was also very happy. I had never dated anyone who did that and have always craved being included in a family.

Then, after just two months of living together, COVID came to town, and like many couples, we transitioned to working from home. It didn’t last long. After a few difficult days with the two of us trying to make it work in such a small space, he told me he needed more space and was heading to his parents’ house in New Jersey. His parents told him not to visit me, but he came twice anyway, though he refused to stay overnight. The infection rates were very high here at the time, so I understood. What I couldn’t understand, though, is that he didn’t seem worried at all about me being alone in the city during the pandemic.

The more I dug in, the more I discovered he had some issues I couldn’t overlook. And it all started with masks.

Being isolated in my apartment gave me plenty of time to, well, obsess over our relationship. With so many other aspects of life missing, I had nothing to distract me from confronting the deeper questions I had about our potential future. The more I dug in, the more I discovered he had some issues I couldn’t overlook. And it all started with masks.

Early on in the pandemic, he didn’t see the importance of wearing a mask, so he didn’t buy one, using a bandana instead. I didn’t really understand why he didn’t prioritize getting a real one. I think he thought it wasn’t worth it since he was under the impression that COVID-19 would pass.

I felt like he wasn’t taking the virus seriously and I wasn’t sure where he was getting his information about COVID-19. He would say things like, “It’s not so bad. It’s only the naysayers that are saying it’s worse than a flu.” That really upset me. My friend’s stepfather died of COVID-19. Maybe he had never had a health scare in his family, but I was still shocked by his response.

He made running errands together impossible. We would be all set to walk into a grocery store and he would tell me he preferred to wait in the car rather than wear a mask. It was annoying, he said; it was hard to breathe, he said. I wouldn’t call him a vocal anti-masker, but it bothered me that I was the one taking on all of the risks by going into stores to get supplies we both needed just because he didn’t feel like going inside with his face covered.

There were other warning signs, but I was determined to make our relationship work. (The idea of being single during a pandemic was a powerful motivator.) So at the beginning of the summer, I found us a two-bedroom to share near where his parents lived. I went into the lease knowing the relationship might not work out—for one, before we moved in, he told me he was planning to eventually move far away from New York City and I never want to leave—so I made sure to hold onto my studio apartment just in case.

The mask was annoying, he said; it made it hard to breathe, he said.

It felt like every week I would discover something new and unfortunate about him. One day I checked the mail and it sparked something in my mind. I realized that we hadn’t talked about how we were going to vote absentee in the upcoming presidential election. When I mentioned how concerned I was about receiving my ballot, he blurted out that he didn’t believe in voting. Honestly, I was shocked. I thought it was because he is registered to vote in another state, but he elaborated, telling me, “No, I don’t believe in voting. I don’t think it matters.” Before that conversation, he had never really expressed his political views. He was always pretty neutral when politics came up; I had no idea that was because he was essentially a closeted non-voter.

He told me he hadn’t voted in the 2016 presidential election because he didn’t feel strongly about one candidate or the other. He was able to recognize that President Donald Trump isn’t doing a good job, but it wasn’t enough for him to say, “I’m going to take action and vote him out.”

As summer transitioned into fall, we tried to enjoy each other’s company, but he kept revealing things I found hard to accept. We often have deep conversations while taking walks and one day when we were out for a stroll, I asked him if he would get a COVID-19 vaccine once it became available. I was careful and specific about what I meant. I told him I knew we wouldn’t be first in line to get the shot—healthcare workers and older people need to get it first—and we’ll likely have some concerns about safety, especially if Trump is still in office, and want to see how others fare before getting it ourselves. But I said, you’re going to get it eventually, right? That’s when I learned he didn’t believe in any vaccine because he claimed he never got sick and that he had a great immune system. (He failed to recognize that he was vaccinated by his parents as a child.) I got really upset and reminded him that the vaccine isn’t just about him, that he could have COVID-19 and not know it.

Then, I asked if he was planning to get a flu shot. He told me he was not only not planning to get one, but that he hadn’t had a flu shot in his whole adult life. I was surprised and appalled, but I was also starting to see a trend: If something didn’t impact him directly, he wouldn’t take it seriously or care.

I know now that there are bigger areas you need to be aligned on: health, politics, the way you see the world and the other humans living in it.

Since I ended our relationship, I’ve been thinking a lot about what went wrong. Yes, the world was entirely different two years ago when we met, but I also realize now that while my ex checked off a lot of the superficial boxes, they weren’t the important ones. I know now that there are bigger areas you need to be aligned on: health, politics, the way you see the world and the other humans living in it.

Now that all of this is behind me, I’m easing back into online dating. Since the last time I was on the apps, I’ve noticed many have made a much-needed improvement; they now ask you to answer questions about how important things like politics and vaccines are to you. Maybe one day soon they will ask about your stance on wearing a mask, too.