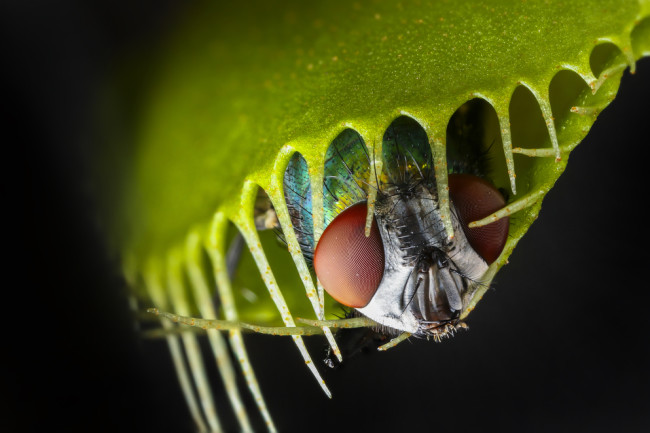 Since at least Darwin’s time, scientists have fawned over carnivorous plants. And who can blame them? It’s hard not to be marveled by the way a sundew uses its sticky arms to immobilize prey, or the speedy snap of Venus flytrap and its uncanny resemblance to animal jaws. These unique species display skill sets that researchers have dissected for centuries in hopes of understanding how these plants became meat-eaters.

Recent technologies, such as genome analysis, have brought new insights to light that surely would have stunned some of the earliest carnivorous plant researchers. “Darwin would have given his firstborn to have such information,” says Thomas Givnish, a botanist at the University of Wisconsin-Madison. But there are still some perplexing mysteries around how these plants came to be. 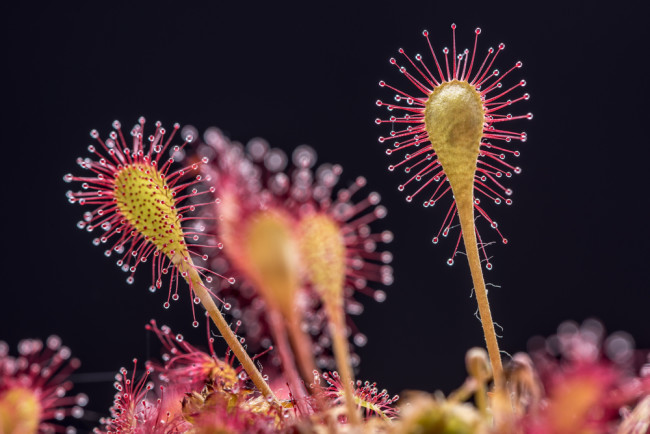 A closeup of a sundew. (Credit: krstrbrt/Shutterstock)

The Carnivorous Plant Circus of Skills

Compared to, say, ferns — which are nearly 400 million years old — carnivorous plants are younger and likely started appearing about eight to 72 million years ago. Since then, the number of tactics species around the world have deployed to make use of other animals for nutrition have exploded.

The maws of the Venus flytrap are probably the most famous — and best understood — style of plant carnivory. “The Venus flytrap is the queen of carnivorous plants, at least for me,” says Rainer Hedrich, a biophysicist at the University of Wuerzburg in Germany.

When the plant needs nutrients, the fleshy-looking insides of its clamp grow bright red and emit a fruity scent meant to lure in insects. A bug falling for the bait lands and moves tiny hairs lining the red tissue. Each manipulated hair triggers an action potential — or electrical signal — that surges through the plant. As Hedrich and his team found, it takes two hair movements to make the Venus flytrap’s mouth close. Once four hairs are moved, the plant starts to churn out digestive juices. This means it waits for its victim to struggle until it knows for sure it has a snack to devour. Only then does the mouth transform into a stomach and intestine, digesting the prey and sending the nutrients into the plant. 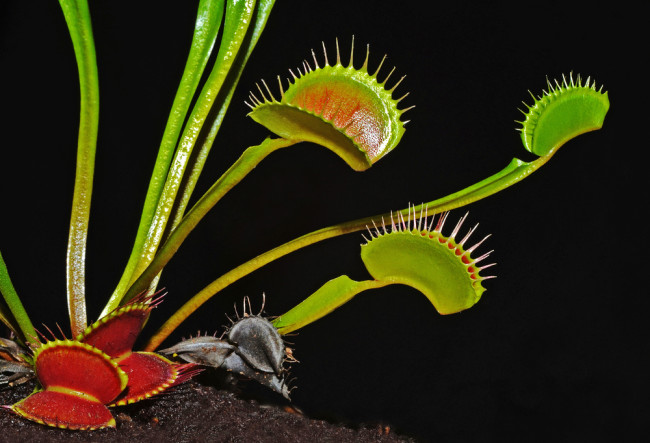 The Venus flytrap is native to subtropical wetlands in the Carolinas. (Credit: nico99/Shutterstock)

Other carnivorous species might not have as much flair as the one Hedrich loves, but they get the job done with their own techniques. North American pitcher plants, for example, grow leaves that wrap into an upside-down-oboe shape and simply wait for prey to fall into their cup. Others, like some butterwort species, line their flat leaves with sticky fluid that glues prey in place before surging in enzymes to break it down. Some plants swap digestive enzymes for microbes, which in turn take some of the nutrients for themselves.

There’s also a whole suite of carnivorous plants that relies on, well, what their companion animals excrete. Tree shrews in Borneo, for example, relieve themselves in the same pitcher plant they occasionally snack on. Feces from shrews and other species are rich in nitrogen, which is one of the elements these plants might be particularly desperate for.

Most of these species flourish in places where soil nutrients, and nitrogen in particular, are scarce — such as the sandstone plateaus in Venezuela. The need to find unconventional sources of nutrients likely drove carnivorous plant evolution in the first place, Givnish says. Insect-eating plants also tend to thrive in sunny and moist habitats. Givnish thinks that’s because carnivory ultimately boosts photosynthesis abilities, a skill plants deploy best in bright and wet conditions. He and his lab will soon run experiments to test the idea. 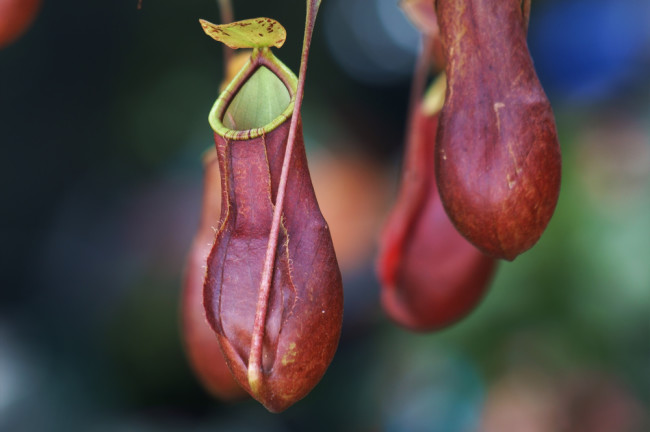 Where Did They Come From?

If a plant was feeling the evolutionary pressure to trade soil nutrients for animal byproducts, how did the species develop the right skills? DNA analysis shows that genes that help other species protect themselves from predation also function to detect and digest prey in carnivorous plants. “They turned the table,” Hedrich says. “Rather than defend, they used the mechanisms to attack.” In non-carnivorous plants, the chomp of a hungry insect ramps up production of a hormone regulating repair and defense. In Venus flytraps, Hedrich and his team found that after prey moves two separate hairs, the same hormone skyrockets — and likely tells the plant to start assembling digestive fluids.

Though researchers have an idea of when carnivorous plants started to appear and what kinds of qualities they adopted, which traits appeared first is still unclear. Carnivorous species tend to be genetically similar to one another — a single genus, or group of relatives, might be made entirely of carnivorous plants, Givnish says. The absence of close relative plants that didn’t make the jump to this unusual kind of nutrient gathering makes it harder to tell where along the family tree key carnivorous traits appeared.

One evolutionary step that has many biologists puzzled is where the pitcher plant leaf shape came from. “We don’t really have any clue right now,” Givnish says. And as a biophysicist, Hedrich hopes carnivorous plants can help show him and other researchers how action potentials evolved. These electrical signals are how muscle and nerve cells communicate in people and animals. If plants can do it too, then maybe their slower, possibly more rudimentary action potentials indicate where the translational method came from.

Whatever happened in these ancient animal-eating plants, the skills they developed are impressive. After all, the genetic source of their abilities is pretty simple, Hedrich says. “Carnivorous plants built on what a stupid cabbage already has.”