Home World These 10 charts show how the US economy performed under Trump vs... 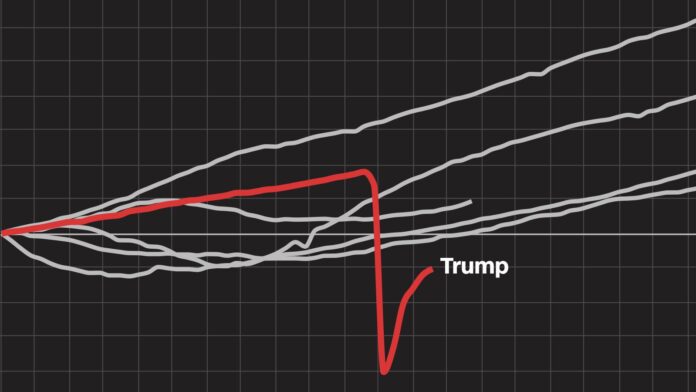 President Donald Trump inherited a strong economy, and it continued to grow at a healthy rate during his first three years in office. Then the Covid-19 pandemic changed everything.

At the start of Donald Trump’s presidency in January 2017, the economy was healthy.

Employers had added jobs for 76 months straight — the longest hiring streak on record at the time — and unemployment was just 4.7%, a 10-year low. Corporate profits were near all-time highs, and so were stocks. Overall, gross domestic product was growing around 2.5% a year — a modest rate for the world’s largest economy. Not everything was rosy: the federal debt was at its highest level since the 1950s. But by most metrics, it was hard to deny: the economy was on solid footing. And fortunately for Trump, the growth continued from there.

Then came the pandemic.

Below, we’ve tracked 10 indicators to show how the economy evolved under each president from Ronald Reagan to Trump. Keep in mind, each presidency started under different circumstances. George W. Bush’s first year in office was plagued by the dot-com bust and the September 11th attacks. Barack Obama’s started with the Great Recession, following a devastating housing crash and a global financial crisis. Despite these crises, however, most recent presidents have presided over a growing economy during their time in office. The Trump presidency will be characterized by the country’s response to the Covid-19 pandemic, which is still playing out both as a health crisis and an economic one.

Hover over the charts to see how the economy under Trump compares with how it evolved under his predecessors.

Up until 2020, President Trump’s first term was characterized by solid job growth, but then the pandemic wiped out about 15% of American jobs in just two months. Since May, the economy has recovered only about half those jobs, and Trump is heading into the election with the worst job losses on record under any president.

In contrast, at this point in Obama’s presidency, the job market was up 0.4%. He took office at a time when employers were cutting hundreds of thousands of jobs a month. Hiring kicked into higher gear later in his presidency.

By the time Trump entered office, he had inherited one of the strongest job markets in American history from Obama. But Covid-19 swiftly put an end to that. The unemployment rate shot to 14.7%, up 10 percentage points from when Trump took office. Although it has improved slightly since then, unemployment still remained elevated in September. No other president has encountered such a sudden spike in joblessness.

Trump loves to talk about how middle class incomes have increased during his presidency — and that was true in his first three years. In September, the Census Bureau released data showing that the median American household earned $68,703 in 2019 — up $5,800 or 9% from 2016, after adjusting for inflation. A strong job market helped lift incomes, as more people worked full-time, year-round. And more than 20 states also raised their minimum wage, boosting earnings for low-income workers.

We don’t have data for 2020 yet, but the pandemic will surely impact those numbers in a big way. For some families, $1,200 stimulus checks and a temporary $600 boost in weekly unemployment benefits actually lifted incomes during the pandemic. But many others, especially those who have lost businesses or are grappling with long-term joblessness, are struggling to make ends meet.

The longest bull market in history began shortly after Obama entered office and continued well into Trump’s presidency. Investors welcomed Trump’s corporate tax cuts in 2017, and although the trade war with China put them on edge, stocks enjoyed a record-breaking run all the way up to 2020. At the start of the pandemic in 2020, the S&P 500 plunged 34% in about a month, before recovering later in the summer. As of October 27, the index was up 49% in Trump’s presidency, overall. While that quick bounce-back is a bright spot for him, it also contrasts with 76% stock gains under Obama and 64% gains under Clinton at the same point in their presidencies.

The housing market is one of the few parts of the economy that hasn’t dramatically declined during the pandemic. That’s in part because record-low interest rates and the work-from-home trend have led city dwellers to buy homes in suburban and rural areas, boosting home prices in many regions. It’s also because extensive measures, including a moratorium on evictions and forbearance programs for mortgages, have helped struggling families weather the crisis so far. Those unpaid bills could eventually catch up to millions of families, causing distress in the housing market. But so far, home prices are up 21% since Trump’s inauguration.

If it feels like your grocery bill is higher lately, that’s because food prices did surge suddenly during the pandemic. Over the longer haul, however, they’ve been relatively stable. At this same point in the presidencies of Reagan, George H.W. Bush, Clinton and George W. Bush, food prices were already up 9% or more. They’re up only 6.1% under Trump, and were up 5.9% under Obama, reflecting an era of low inflation.

American consumers are the backbone of the US economy and are not easily fazed. Although consumers sharply cut back on spending at the start of the pandemic, they were quick to reopen their wallets in May and June once stimulus checks and unemployment benefits came to their aid. Retail spending on goods, particularly through online retailers, rebounded swiftly. (Meanwhile, spending on services like haircuts, travel and dining out at restaurants remains well below pre-Covid-19 norms.) Even with a quick recovery, though, consumer spending has grown less under Trump than under any of the prior five presidents.

American manufacturing jobs peaked in 1979, and no president other than Clinton has presided over gains in factory jobs since then. So when Trump promised to bring back factory jobs, it was a tall order. In Trump’s first three years, the manufacturing sector did add some jobs, but in 2020, the pandemic ruined what little progress those workers had enjoyed. As of September, the sector was down 164,000 jobs, or 1.3% from when Trump took office. That said, layoffs at factories were even steeper under Presidents Reagan, Obama and the Bushes, as globalization and technological progress reduced America’s manufacturing workforce.

The federal government’s debt burden hasn’t been this high relative to the size of the economy since World War II, but it didn’t get there during Trump’s presidency alone. The debt grew under Reagan, who ushered in massive tax cuts, and it surged under Obama, who used federal stimulus funds to aid the economy during the Great Recession.

At the time Trump took office, the debt totaled around 76% of GDP. But by mid 2020, it was 105% – a 29 percentage-point increase during his presidency. Economists often argue for paying down the debt when the economy is strong, and spending more when the economy is weak. But despite his promises to “get rid of” the debt, Trump has grown it in both good times and bad. While much of that increase came from coronavirus relief funds, earlier policies like corporate tax cuts and an increase in defense spending also fueled the rise.

The widest measure of economic activity — gross domestic product — measures the value of the goods and services produced in the country. It typically grows between 2% to 3% per year after adjusting for inflation. Trump’s first three years were all within that range, but 2020 saw a deep decline. We don’t have a full year of data yet, but the second quarter was the worst in records going back to 1947. Third-quarter data is due out on Thursday, and is expected to show some improvement — but not a full recovery.

Many economists predict businesses and workers will not fully bounce back from this severe economic downturn for years.