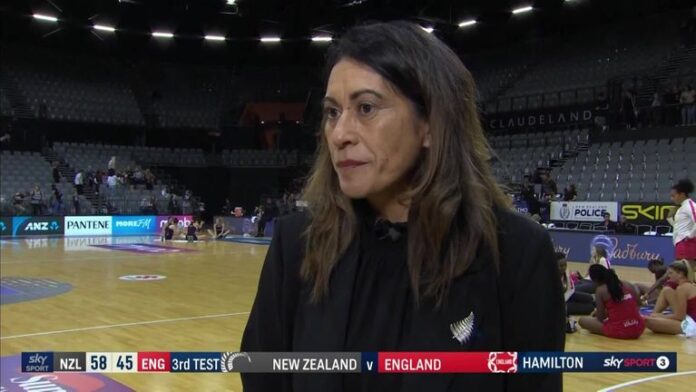 World champions New Zealand beat England 58-45 on Wednesday in first of three Tests. Watch the second Test in Hamilton from 6am on Friday, live on Sky Sports Main Event and Mix and streamed on YouTube

Dame Noeline Taurua has asked for more from her Silver Ferns outfit, despite securing a 58-45 victory over the Vitality Roses in the first Test on Wednesday.

Post-match, the World Cup-winning head coach was asked what she made of her team’s performance in Hamilton and she didn’t hold back with a frank assessment.

“It was great that we got the win on the scoreboard, but [I didn’t make] much of it, if I’m going to be honest,” Taurua said.

“I think that I only saw one great passage of play in our attacking end. It was very stilted I feel and got caught up in the body, a bit of the timing was out.

⚓️ “At the moment your timing is up the ship….”

Listen to Dame Noeline Taurua laying down the law to her Silver Ferns.

“Unfortunately, we weren’t able to pull our game back and get a bit of a tidier product. The numbers look good, but I know in my heart that we should have done better.”

The Silver Ferns had prepared for this series with a run of fixtures against New Zealand A, New Zealand’s U21s and the New Zealand men’s side and their play-off contest against the men, saw them secure their first-ever victory over their counterparts.

After defeat, the New Zealand men’s captain Kruze Tangira told NewsHub that they were “pushed on attack and smothered in defence”. In Taurua’s mind, the Silver Ferns didn’t press on from that performance as they should have done.

“There was a bit of flatness and maybe that’s the thing that we need to acknowledge, that this is our starting point,” she said after the encounter with England.

“I expected that we were just going to keep on rolling from the men’s match and I feel that we’ve gone backwards a bit.

“So, maybe this is a starting point and we’ve got to pick ourselves up for the second Test.”

Taurua is widely regarded as one of the best coaches in the world game and is someone who has an incredible amount of netball nous. Although she was unhappy with her side’s display, she didn’t shy away from giving credit to England as their opponents.

“I thought that they were really good. I think that they were the opposite to us, they had nothing to lose. They had a lot of vibrancy and energy out there,” she said.

“They hit the ball hard, not only in defence but in attack. I feel that we became a little bit timid. I thought England did really well.”

With three minutes to go, Taurua called upon Monica Faulkner to replace captain Ameliaranne Ekenasio. The shooter became Silver Fern #176 but showed a few nerves on court by missing both of her attempts at goal.

“We’ve been managing Mils [Ameliaranne] since the first camp and we acknowledged that she had a bit of a twang in the first quarter.

“It was good to get Monica out there for her first Test, once again it’s a start but we need a bit of improvement in that respect.”

Both the Silver Ferns and the Vitality Roses will now manage a short turnaround before the second Test takes place at the same venue, Claudelands Arena, on Friday. The final Test will take place on Sunday.

Live netball continues on Sky Sports with the Vitality Roses taking on the Silver Ferns in the Second Test on Friday in Hamilton. Join us from 6am on Sky Sports Main Event and Mix.