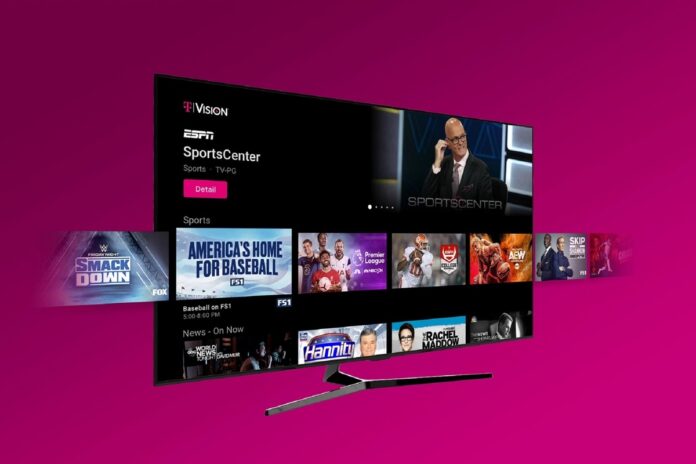 Three years after promising to “disrupt” the TV industry, T-Mobile finally has a streaming service worth caring about.

T-Mobile’s new TVision service is cheaper and more flexible than other live streaming options such as YouTube TV and Hulu + Live TV, mainly because it puts news, sports, and local channels into a separate bundle from most other entertainment channels. T-Mobile’s also launching its own streaming device, called the TVision Hub, whose remote control and interface resemble what you’d get with a cable box. That could make it an inviting gateway to cord-cutting for folks who don’t want to lose familiar cable features.

Does any of this qualify as disruptive? Perhaps not, but it still represents what live TV streaming needs right now.

One caveat: While TVision will carry local NBC stations nationwide, some markets may only have local coverage from either ABC or Fox, not both. In those cases, T-Mobile will supply a national feed from the missing station, so you’ll still get primetime programming, daytime shows, national news, and sports. (You can check your local lineup here.)

With the $40-and-up “Live” plans, T-Mobile is including 100 hours of cloud DVR and the ability to watch on up to three devices at a time. The cheaper “Vibe” plan will support up to two simultaneous streams, and DVR will be a $5 per month add-on.

For device support, TVision will work with Fire TV, Android TV, the new Chromecast with Google TV, Apple TV, iOS, and Android at launch. T-Mobile told CNet that it’s working on Roku support, but wouldn’t commit to a timeframe.

TVision is launching on November 1 for T-Mobile wireless customers and later in the month for Sprint customers. Those who sign up for TVision’s $50-and-up plans by the end of this year can get a free year of Apple TV+ and an Apple TV 4K for $99, which is an $80 discount.

For everyone else, TVision will launch sometime next year, though T-Mobile CEO Mike Sievert told CNet this week, “there might be different prices” for non-subscribers.

Unbundling entertainment is a big deal

The most notable achievement with all this is T-Mobile’s uncoupling of entertainment channels—or most of them, at least—from those that carry news, sports, and local broadcasts. Looking over the channel list above, you’ll notice that channels owned by ViacomCBS, Discovery, and AMC are all relegated to the $10 per month Vibe package, which you can get by itself or as an add-on to the pricier Live packages.

That’s a big distinction from other live TV services, many of which have made those channels mandatory. YouTube and FuboTV, for instance, both include channels from ViacomCBS, Discovery, and AMC in their base packages, which both start at $65 per month. Hulu + Live TV (which doesn’t have AMC channels in any of its packages) starts at $55 per month. If you’re one of the folks who cried foul when YouTube TV added Viacom channels in July alongside a $15 per month price hike, TVision might be for you.

T-Mobile’s approach still has downsides. CBS isn’t part of any TVision package, so you’d have to subscribe separately to CBS All Access to get that channel. Also, some entertainment channels remain tied to T-Mobile’s Live packages, including Syfy, Bravo, Disney Channel, FX, and Cartoon Network. It’s no coincidence that the companies in charge of those channels—Comcast’s NBCUniversal, Disney, and AT&T’s WarnerMedia—also own popular sports and news channels, and have been loathe to unbundle them.

Still, T-Mobile is causing another little crack in the traditional pay TV bundle, one that its rivals have so far been unwilling or unable to match.

Alongside the new streaming service, T-Mobile’s also releasing its own streaming device. The $50 TVision Hub dongle will (of course) have the TVision service built in, but since it’s based on Android TV, it can access lots of other streaming services as well.

Thought I haven’t tried it yet, a preview of the Hub by Rich DeMuro reminds me of AT&T TV and its own companion streaming box. Both devices come with chunky remotes that include number keys, buttons for channel flipping, a record button for the DVR, and shortcuts to both the TV guide and DVR menu. The grid guide looks a lot like what you’d get from a cable box, and yes, there is a visual preview when you fast forward through recordings.

None of this will sound particularly appealing to streaming TV natives, but those who do still have cable aren’t as eager to sacrifice programming grids and number keys. They just want a familiar TV experience that costs less. AT&T TV delivered the first half of that equation, but bungled the second with expensive bundles and long-term contracts.

T-Mobile may fare a lot better, however. It’s providing a lot of the local, news, and sports channels that cable holdouts are unwilling to give up, with the option for a streaming device that doesn’t feel like a major departure. And for customers of T-Mobile or Sprint, it could restore the kind of bundle discount that they’d otherwise lose by uncoupling home internet and TV service.

The real disruption is still happening outside of the TV bundle, where services like Netflix, Disney+, and Amazon Prime are changing the way we watch TV. T-Mobile is just offering a slightly better bundle, and for people who still have cable, maybe that’s enough.