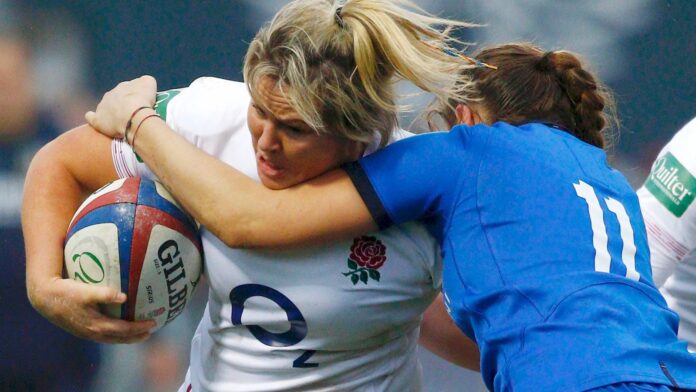 Marlie Packer believes the England squad are in the safest possible environment; Watch England face Italy in their final match of the 2020 Women’s Six Nations live on Sky Sports Arena from 4.30pm on Sunday; kick-off 5pm

France’s trip to Ireland was reportedly postponed on Thursday following an outbreak of COVID-19 cases in the French squad, with the game having been scheduled for Sunday in Dublin.

England flanker Packer, whose side were crowned winners of this year’s tournament following France’s draw with Scotland last weekend, insists the Red Roses are happy to travel amid the pandemic as they aim to secure successive Grand Slam titles.

“It’s obviously gutting what’s happened in the French camp,” Packer said. “I don’t know properly what’s going on, but we’re just concentrating on ourselves and making sure we stay in our bubbles and that we’re doing all the things correctly.

“When we go to Italy I know we would have been tested, you’ve got to have all the right documents and when we get over there we’re only allowed in our hotel and we’ve got to stay in our bubble.

“We’ve been told there’s no venturing out for a walk around the streets or going to the shops to get some snacks – which some of us girls like to do!

“It’s actually going to be quite confined. We’re going to be in our hotel and there’s not much else we’re going to be doing, so I feel like we’re doing the safest things that we can do. We want to get this game going, we want to go out there and hopefully win the Grand Slam.”

Packer, who is set for her first international appearance in just under a year following a lengthy injury lay-off, also explained the rules and restrictions the England squad must follow.

“At the moment we’ve been training at two different bases Pennyhill Park have got CCTV everywhere so we got told when we went in there ‘look, you’ve got to keep your two metres’,” she said.

“We’re constantly in face masks. When we go out to train we have a training block, then we have to go and wash our hands, hand sanitise, and then we go back in.

The Grand Slam is still on for the squad who face Italy on Sunday 🌹 pic.twitter.com/jiMi5uOQMS

“The balls get washed and it’s just become the norm. I think when we first came in we were all like ‘what is this? This is ridiculous’ but actually, it’s about safety and we don’t want the virus to come into the squad and wipe a load of players out.

“We want to keep doing what we can to hopefully put a show on for fans so actually what we’re doing is right. When we’re in sessions, they’re colour-coded with the amount of time we’re allowed to do. It’s tough but it’s protocol that needs to be in place. The bubble is very good and I feel like as players and people we’ve bought into it really well and making sure that we’re all safe.

“We’re being tested on a weekly basis, so we come in on a Monday and then the test results are usually back with us on Tuesday afternoon. We just roll with it and that’s the thing at the moment, we just keep adapting to whatever the virus throws at us.”

Packer’s 23-year-old team-mate Sarah Bern added: “We’ve got a great medical team. Like Marlie said the girls have been really switched on with it.

“The team manager and all our covid officers have put the plans in place. I feel really safe here and it’s just a question of rolling with the punches. We don’t know what’s going to happen but at least we’ve got a plan to get us there.”